In 2016 Geotech completed a test of a helicopter-borne GT-2A gravimeter combined with ZTEM™ (Z-Axis Tipper Electromagnetics) and aeromagnetics over the Vredefort Dome impact structure in South Africa. The survey consisted of nine (9) approx. 70km long NW-SE oriented flight lines, totalling 640km, acquired at a nominal spacing of 500m over an area of approximately 650 km2. The successful test demonstrates the value of integrating density measurements using airborne gravimetry to complement the superior depth of investigation of ZTEM™ and aeromagnetics.

Geotech has been flying the helicopter ZTEM™ natural field EM system commercially since 2007, and it has proven a most effective resistivity mapping technology with the greatest depth of investigation (>1km) of all available airborne EM platforms. Recently the integrated ZTEM-Mag towed-bird receiver for fixed wing aircraft has been adapted for use with a helicopter platform (Figure 1) and, by virtue of its lighter weight and aerodynamic properties, this allows it to be flown at higher rate of speed thus improving its line-km efficiency. Additionally, the caesium magnetometer’s location inside the EM bird (Figure 1), being lower to the ground, greatly improves its sensitivity to geology. Furthermore, since the ZTEM™ towed loop does not transmit any EM signal, it also provides an exceptionally low-noise platform for magnetic data acquisition, superior to both time- and frequency domain transmitter-receiver EM systems, as well as fixed-wing stinger magnetometer systems that also require removal of aircraft-induced effects.

Most recently, the integrated helicopter ZTEMTM -magnetometer towed-bird system has been successfully paired with the GT-2A airborne gravimeter on-board the Astar AS350-B3 helicopter plat-form. The nature of the plane waves measured by the ZTEM™ system makes it relatively insensitive to flying height above the terrain, thus also making it an ideal pairing for airborne gravity measurements acquired at a fixed altitude to minimize turbulence. The resulting helicopter ZTEM-Gravity-Mag system allows for concurrent measurements of resistivity, density and magnetic susceptibility properties, providing an even more powerful, multi-parameter and deep investigation geophysical mapping capability than ever before. To showcase the advantages of this integrated survey platform, Geotech has flown a successful survey test over the well-known Vredefort Dome in South Africa, which has been extensively surveyed using geophysical methods; most notably airborne gravity-gradiometry. 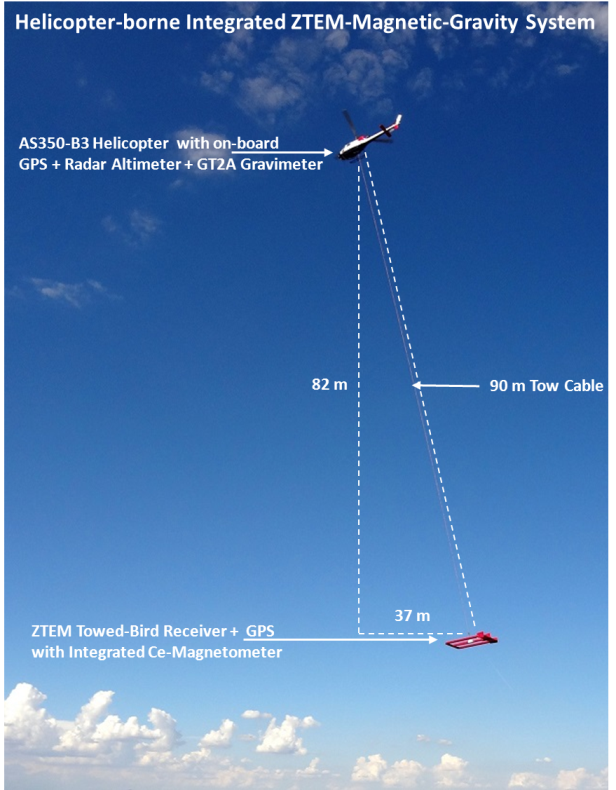 A GT-2A airborne gravimeter, manufactured by Canadian Micro Gravity (Aurora CAN), is installed in the AS350-B3 helicopter cabin, along with the Geotech Data Acquisition System. The integrated ZTEM™ and caesium-pumped magnetometer towed bird receiver is flown at a nominal 82m distance below the helicopter as shown in Figure 1. A fixed survey height of 1825m above the Geoid was set to minimize the effects of vertical move-ment on the gravimeter, safely above the highest terrain in the test area with the ZTEM™ sensor 110-420m above the ground. Without the need to contour the terrain, flight speed is increased to 130km/h, 30km/h faster than a standard ZTEM™ survey, with similar helicopter endurance and flight length.

The test was flown over the northwest side of the Vredefort Dome (Figure 2), near the towns of Vredefort, Potchefstroom and Parys, South Africa, approximately 120km southwest of Johannesburg. Nine 70-km lines were flown at a spacing of 500m oriented N 135° E, as well as five 20km-long tie lines flown orthogonal at a spacing of 10,000m. 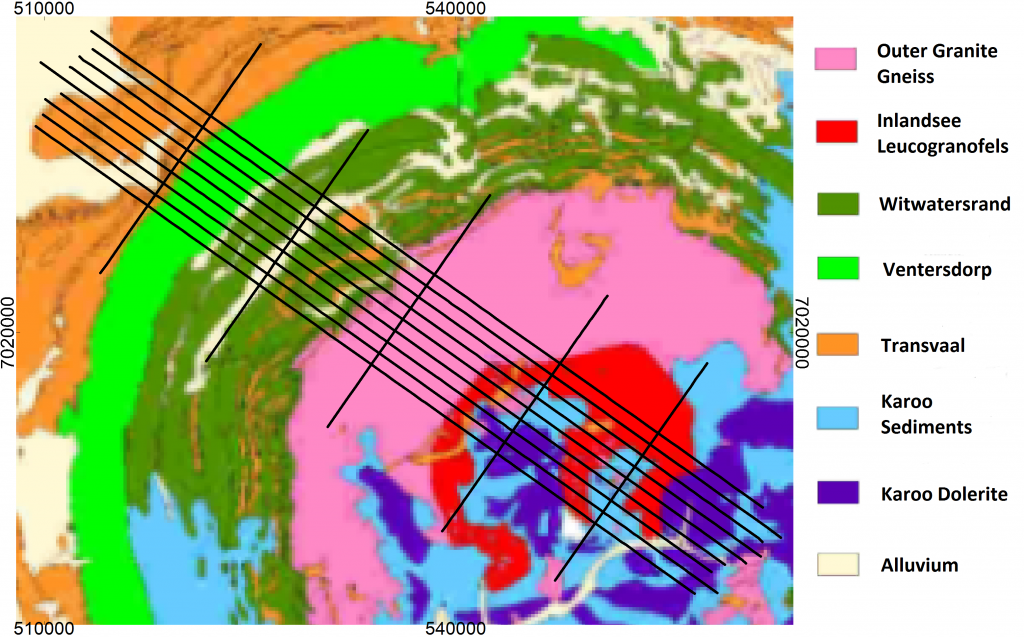 The Vredefort Dome Structure is a complex impact structure with a diameter of ~80 km located in the Kaapvaal Craton, the result of a large meteorite impact 2.02Ga ago (Cowan & Cooper, 2009. ASEG Extended Abstracts, 4p.) as evidenced by shock metamorphism and impact-melt breccias. The central Dome’s 40-km wide core is comprised of high-grade mid-Archean migmatitic gneiss of 3.1-3.2Ga, from 25 to 36km thick, thus potentially exposing the paleo-Moho at its centre (Lana et al, 2003, Earth and Planetary Science Letters, 206, 133-144). Phanerozoic sediments and dolerite sills obscure the dome to the south and southeast.

The aeromagnetic and gravity data collected with the heli-borne ZTEM™ data (Figures 3 & 4) show excellent correlation with previously-acquired data over the Vredefort dome structure. The 37Hz low-frequency in-phase TPR image (Figure 5) complements the density information determined from the gravity and aeromagnetic data, providing a clearer picture of the impact structure at depth. 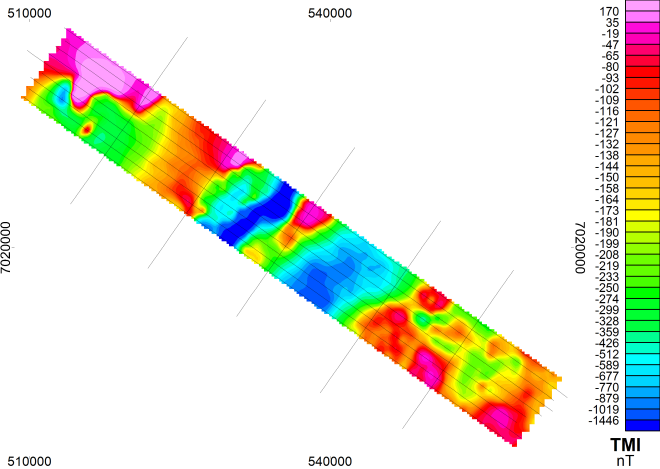 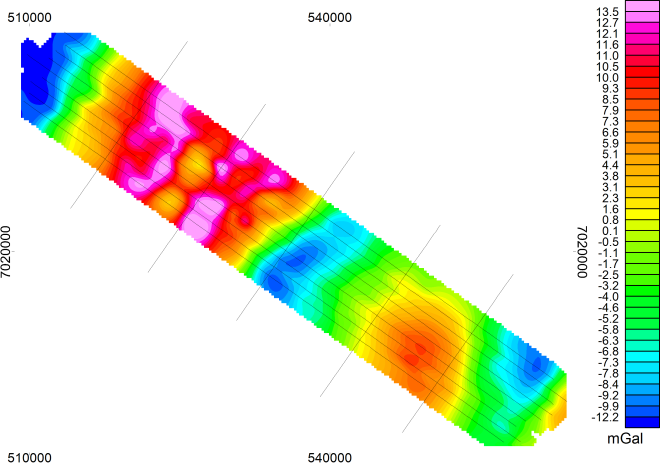 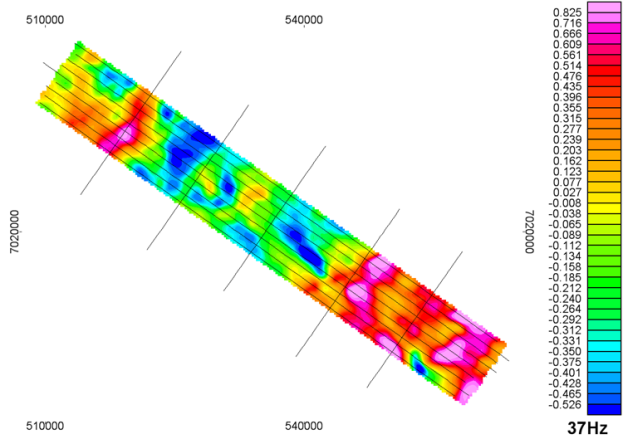 Four passes were made of L1040, in the centre of the survey area, to demonstrate the repeatability of the gravity measurements when installed with a ZTEM™ system. A 150-second Kalman filter was applied to counteract aircraft movement and turbulence. Overlapping profiles of each pass are shown in Figure 6. The RMS error between the repeat passes is 0.70mGal.