All 3 holes in this area have intersected off-scale mineralization. A total of 11 drill holes have now encountered mineralization in this area, which remains open in all directions and has currently established a strike length of 76 m. Future drilling will be directed to determine whether this area which is 180 m southwest of Arrow, is connected to Arrow to the northeast, and the extent of the area further to the southwest.

Hole AR-16-90c3, which was drilled 74 m up-dip and southwest of hole AR-16-77c2 (see press release March 30, 2016) has intersected 8.05 m of total composite off-scale radioactivity (>10,000 to >61,000 cps) marked by dense accumulations of massive to semi-massive pitchblende within 68.0 m of total composite mineralization. Included as part of the 8.05 m of off-scale mineralization 1.5 m of minimum-greater-than- 61,000 cps including 1.0 m that was continuous. This is the most significantly mineralized hole to date at this newly identified area.

In addition, a highly prospective alteration zone that is host to locally anomalous radioactivity has been identified 230 m below surface at this new area 180 m southwest of Arrow which represents a new target for further drilling (see within figure 2 “alteration zone”). The alteration zone is marked by intense dravite rich hydrothermal breccias which appear to be similar to those found in close proximity to the strong uranium mineralization in the higher grade sub-zone of the A2 shear. Significantly, the down-hole gamma probe survey completed after drilling AR-16-82c2 identified a 1.3 m long radiometric anomaly (2PGA-1000 model gamma probe) measuring greater than 1,000 cps to 26,132 cps within the alteration zone. Only weakly anomalous radioactivity was measured in the drill core with a handheld RS-120 scintillometer, which did not correspond to the strong down-hole radiometric anomaly. This was potentially a result of the wash out of mineralization within clay alteration. Further work is planned to explain this discrepancy.

• The land-based and basement hosted Arrow zone currently covers an area of 870 m by 280 m with a vertical extent of mineralization commencing from 100 m to 920 m, and remains open in most directions and at depth.

• The Company has cash on hand of approximately $100M upon closing of the previously announced financing with CEF Holdings.

“The intense alteration and dense massive to semi-massive mineralization encountered in drill holes AR-16-82c3 and -90c3 is analogous to the holes that signalled the beginning of the higher-grade A2 sub-zone. The structural analysis at this southwest zone supports the potential that it is an extension of the Arrow Deposit with potential for the presence of another high-grade zone.”

“The area 180 m southwest of Arrow is developing quickly and significantly expanding the footprint of mineralization at Arrow. One of the objectives of the summer drilling program commencing in late June, will focus on this 180 m area southwest of Arrow in both directions along trend. We estimate a significant amount of drilling is required until the full extent of mineralization can determined.” 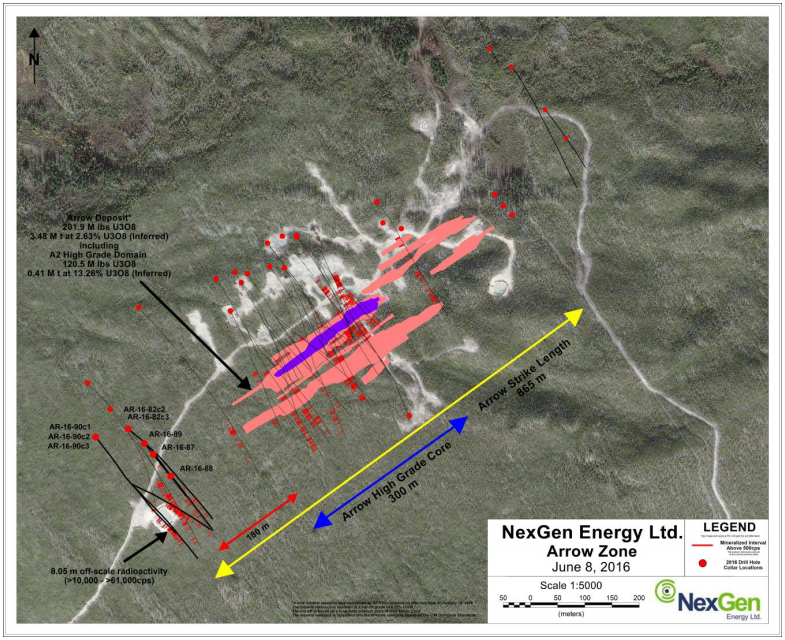 Read the news release “NexGen Drills Off-Scale in All Four Shears at the Arrow Deposit” to see how VTEM technology contributed to this project.