The summer 2016 program will be the largest seasonal drilling program at Rook I to date and will be comprised of a minimum 35,000 m of diamond drilling using seven rigs. Six rigs are now fully operational at site with two at Arrow, two at the 180 m southwest area and two regional rigs currently testing the Patterson Corridor southwest of Arrow. The seventh rig is on site and will commence drilling at Arrow shortly.   This summer program is budgeted at $14M and is fully funded with cash on hand of approximately $100M.

There are three primary objectives of the summer 2016 drill program:

In addition, construction of an all-weather access road from Highway 955 to the Rook I camp and property has been completed.  Development studies are well underway, and the Rook I camp has undergone infrastructure expansion to accommodate increased exploration and development activity.

Leigh Curyer, Chief Executive Officer, commented: “The summer drilling program’s objective is to continue to expand and delineate the foot print of the Arrow Deposit and in parallel explore the highly prospective 9kms of the Patterson Conductor Corridor located on Rook I. The increase in the size of the program reflects the geological setting of Arrow and the Patterson Conductor Corridor demanding a significant level of additional drilling. In conjunction, NexGen has undertaken the commencement of environmental and engineering programs to optimize the continued development of Arrow.”

Core Drilling at the Arrow Deposit:

Two rigs are currently drilling at the Arrow Deposit and are concentrating on both resource growth and expansion as well as in-fill drilling in the A1 through A4 shears. The Arrow Deposit remains open in most directions. Large areas in each of the Arrow shears are completely undrilled and will be targeted during  the summer. Recent discoveries of high grade mineralization in the A1 and A4 shears shows that there is excellent potential for significant additional mineralization both within the currently defined envelope at Arrow and outside of it. Both rigs are using Devico directional drilling technology with the assistance of Tech Directional Services Inc.

Two rigs are currently in operation at the area 180 m southwest of the Arrow Deposit. This new area was discovered in mid-March after publishing the maiden Inferred mineral resource estimate for the Arrow Deposit which comprised 201.9M lbs of U3O8 at 2.63% U3O8 contained in 3.48M tonnes (see News Release dated March 3, 2016). The Company will be following-up on the early success from winter and spring drilling which included AR-16-90c3 which drilled 8.05 m of off-scale mineralization including 1.5 m of minimum-greater-than-61,000 cps radioactivity (see News Release dated June 13, 2016).  Drilling in this area will concentrate on both systematic delineation and aggressive step-outs.

Two rigs are currently drilling high-potential targets on the Patterson conductor corridor. These target areas, show similar geophysical characteristics to Arrow with coincident VTEM and gravity anomalies. The Company believes these targets represent excellent potential for new discoveries on the Rook I property.

Concurrently with this large summer 2016 drilling program, the Company is advancing the project towards the next stage in development. Construction of a fully permitted 13.5 km all-season access road from Provincial Highway 955 to the Rook I camp and property has been completed. Geotechnical, metallurgical, consultation, and environmental studies are currently well underway.  These studies will form the basis of further development work including economic studies and permitting activities in the future. Read the press release here. 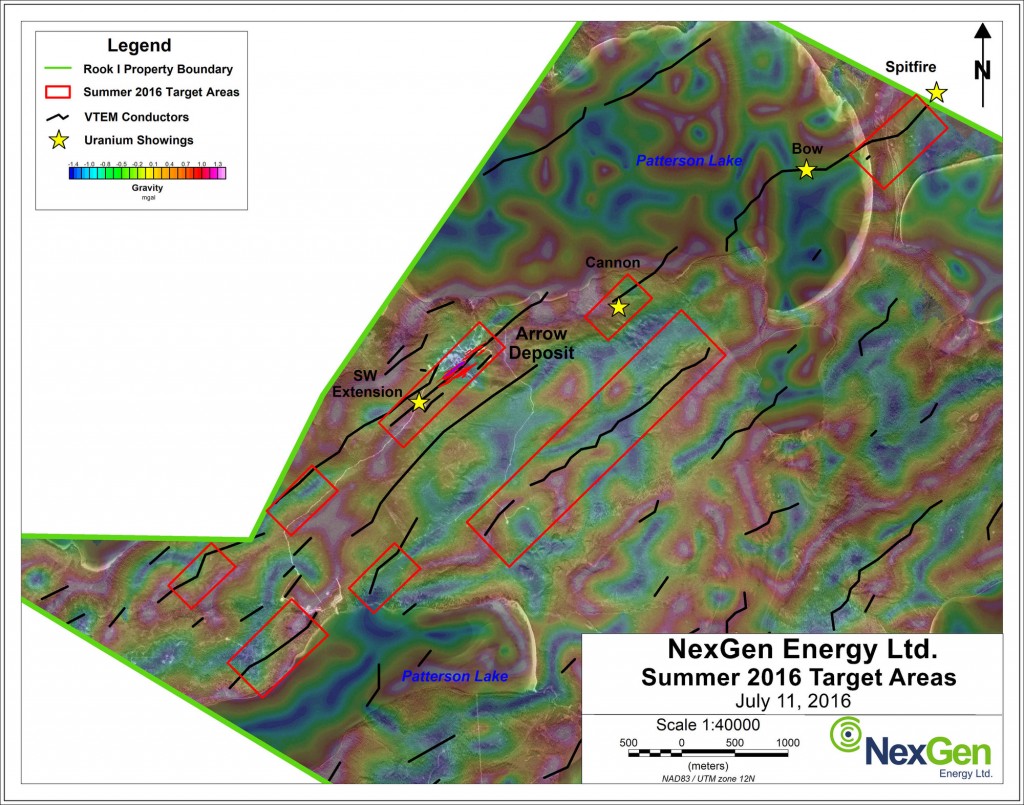