The Tusker gold deposit is located in the Lake Victoria Goldfields of Tanzania, approximately 60km SSW of the town of Mwanza (Figure 1). The deposit has a total estimated resources of 123.27 Mt at 1.15g/t Au for 4.54 million ounces of gold (ASX release, 5th September, 2006). Gold mineralisation within the deposit is closely associated with sulphides. Geophysical data acquired over the deposit has included petrophysics (down hole logs and core measurements), airborn time domain electromagnetics (EM), airborne magnetics and dipole-dipole induced polarisation (IP) / resistivity.

The Tusker deposit is hosted within a package of Archaean east-dipping clastic metasedimentary rocks ranging from mudstones to conglomerates. Mineralisation is preferentially hosted in siltstones and fine-grained sandstones. The unmineralised stratigraphy covering mineralisation in the western part of the deposit comprises a sequence of finer grained mudstones and siltstones which are typically magnetic. The contact between unmineralised and mineralised stratigraphy is lithological. The main Tusker zone trends north-south and is sub-vertical in orientation. Sulphide stringers and replacements are dominated by pyritepyrrhotite. Arsenopyrite generally correlates with elevated gold grades (>1g/t Au). The system is dominated by broad low-grade mineralised zones, with minor intervals of >5g/t Au, and sporadic and isolated bonanza intercepts (>100g/t Au) associated with visible gold (Dobe, 2005).

Down-hole density, magnetic susceptibility, conductivity and gamma data were acquired on five holes within the Tusker project, including NYZRCD029 shown in Figure 2. Down
hole logs for this hole are shown in Figure 3. In this hole, high conductivities at ~185m, 230m and 340m depth correlate with anomalous gold values. Density is also elevated in these zones suggesting the presence of sulphides. Conversely, elevated conductivity and density readings do not correlate with gold at 390m depth. This suggests that while conductivity may be used as a tool to locate sulphides, there may not always be gold present with sulphides. Further, high gold assays at 170m depth are not correlated with density or conductivity highs, suggesting gold may be present in the absence of abundant sulphides and a conductive signature.

Petrophysical measurements were performed by Systems Exploration on samples from drillholes NYZRCDD032 and 126. Table 1 contains results and Figure 2 shows the location of these drillholes. Sample 17 shows elevated conductivity (EM and galvanic), magnetic susceptibility, density and chargeability compared with other samples. Visual examination of this sample reveals abundant fine-grained pyrrhotite and minor cubic pyrite. Figure 4 shows the location of three petrophysical samples down hole against gold assays, lithology and magnetic susceptibility measurements. This figure shows that sample 17 was taken from within the mineralised zone.

Airborne Time Domain EM
Geotech Airborne Limited acquired helicopter Versatile Time domain EM (VTEM) data over the Tusker deposit in August 2006. Data were acquired at 50m line spacing over an area of 44 km2. Flight direction was 060°, perpendicular to the dominant strike of geology, and the EM bird height was 32m. Thirty measurement gates were used in the range from 70us to 8900us (Geotech, 2006). Figure 5 shows late time channel data over the first vertical derivative of airborne magnetic data.

An inverse model was performed on line 1630 of the survey using University of British Columbia (UBC) software EM1dTM. A 28 layered earth model was used, increasing in thickness from surface to depth approximately logarithmically: the first layer was 5m thick and the deepest layer was 232m thick. A starting model of 0.04 S/m and a reference model of 0.0002 S/m was utilised.

The inversion result is shown in Figure 6, along with gold plotted down hole. The inversion images the deposit geometry well, which is capped by a less conductive mudstone package.

High conductivity values in the inversion which spatially correlate with mineralisation are supported by the high measured EM conductivity of sample 17 discussed previously. This sample contained fine grained pyrrhotite and was taken from within Tusker mineralisation. 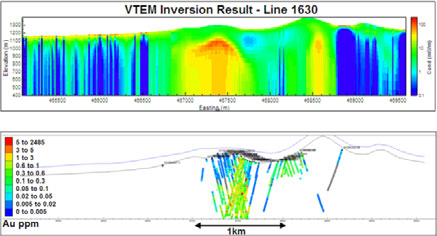 Figure 6 – UBC inversion result for line 1630 of VTEM data. The top pane shows the inverted model, and the bottom pane shows drill holes through the same section, with gold assays displayed in colour.

Airborne Magnetics
Airborne magnetic data were acquired over the project in March 2004 at 75m line spacing and 40m terrain clearance. The second vertical derivative of reduced to pole magnetic data is shown in Figure 7. The magnetic data map the magnetic mudstone / siltstone package, and show that stratigraphy has been deformed. The data also suggest that Tusker is at the intersection of a SE stratigraphic discontinuity, NS fault and NE fold and fault axis.

Here's What Our Clients Had To Say