Airborne Inductively Induced Polarization Effects In and Their Removal from the VTEM Data from Mirny, Russia 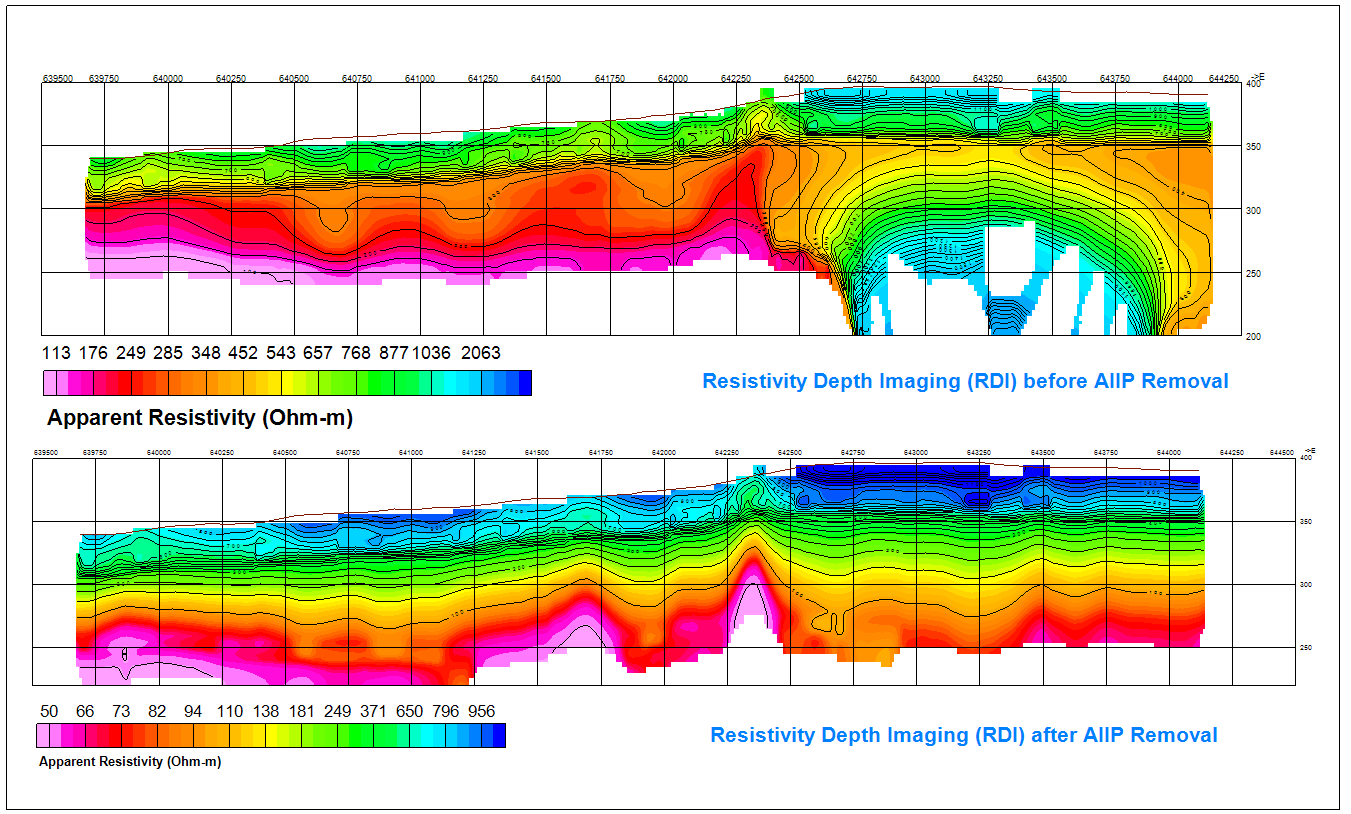 Awarded Best Paper in the Mining and Geothermal Sessions

Airborne inductively induced polarization (AIIP) effects, in the form of numerous negative transients, have been observed in the VTEM™ helicopter time-domain EM (TDEM) data from Mirny, Russia. The survey area is located in the continuous permafrost zone. Inductively induced polarization (IIP) effects in ground TDEM data had earlier been reported from the same region.

VTEM data reflect mainly two physical phenomena in the earth: i) electromagnetic induction and ii) airborne inductively induced polarization (AIIP) related to the relaxation of polarized charges in the ground. Typical AIIP effects in the VTEM data from Mirny corrupt only the early to mid-time channels, from 55 us to 400 us. Moreover, the earliest few time channels, from 18 us to 48 us, are not affected by AIIP, because the IP effect takes a finite time to build up. Cole-Cole analysis of the AIIP affected VTEM data showed that the frequency factor and the time constant are close to 0.8 and 0.0001s, respectively. Since the earliest time channel data are not affected by AIIP, the resistivity of the shallow ground can still be precisely determined.  As a result, the purely inductive VTEM decay can be accurately modelled and used to remove the AIIP effect from later time-channels.

During September 2014, Geotech Ltd. carried out a helicopter-borne Versatile Time-domain Electromagnetic (VTEM™; Witherly et al., 2004) survey over an area near Mirny, Russia (Figure 1), on behalf of the ALROSA mining company.

The survey area is located in the continuous permafrost region of Russia. Kozhevnikov and Antonov (2012) reported fast decaying inductively induced polarization (IIP) effects in ground TDEM data from the same region. AIIP effects in other airborne TDEM system from permafrost region in Canada were reported by Smith and Klein (1996).

VTEM data are mainly the time-domain electromagnetic responses of at least two physical processes in the earth: i) electromagnetic induction and ii) airborne inductively induced polarization (AIIP) related to the relaxation of polarized charges in the ground (Kratzer and Macnae, 2012 and Weidelt, 1982). Negative transients, attributed to AIIP effects, have been observed in VTEM dB/dt and B-field Z-component data (Kwan et al., 2015). 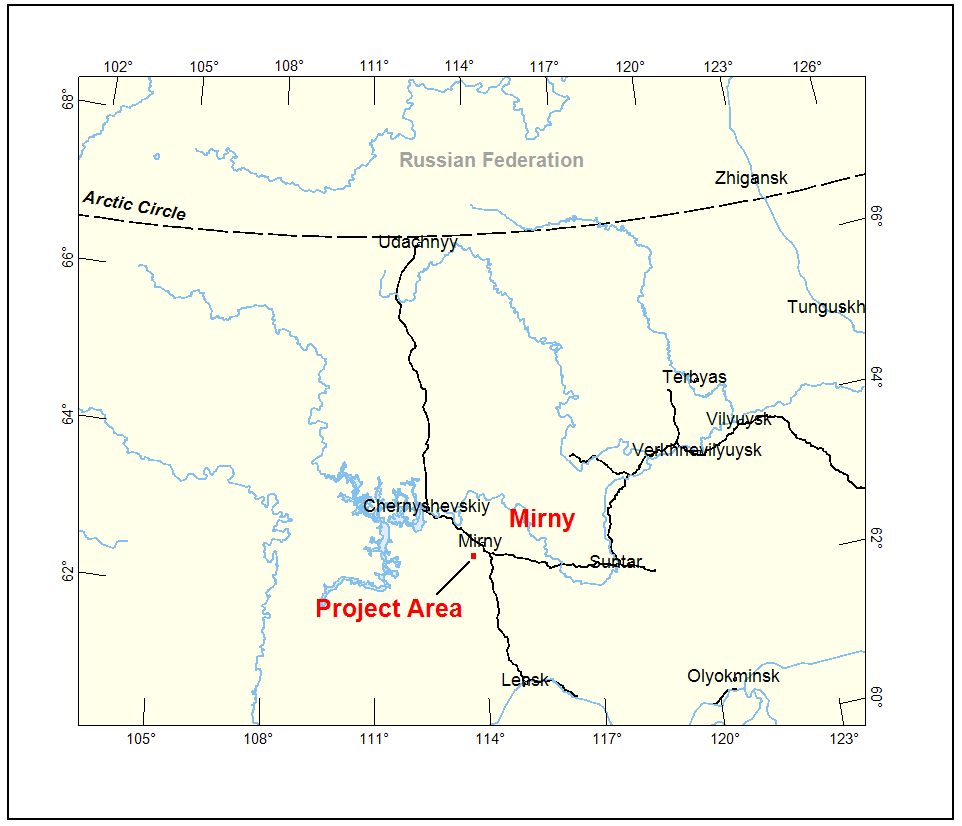 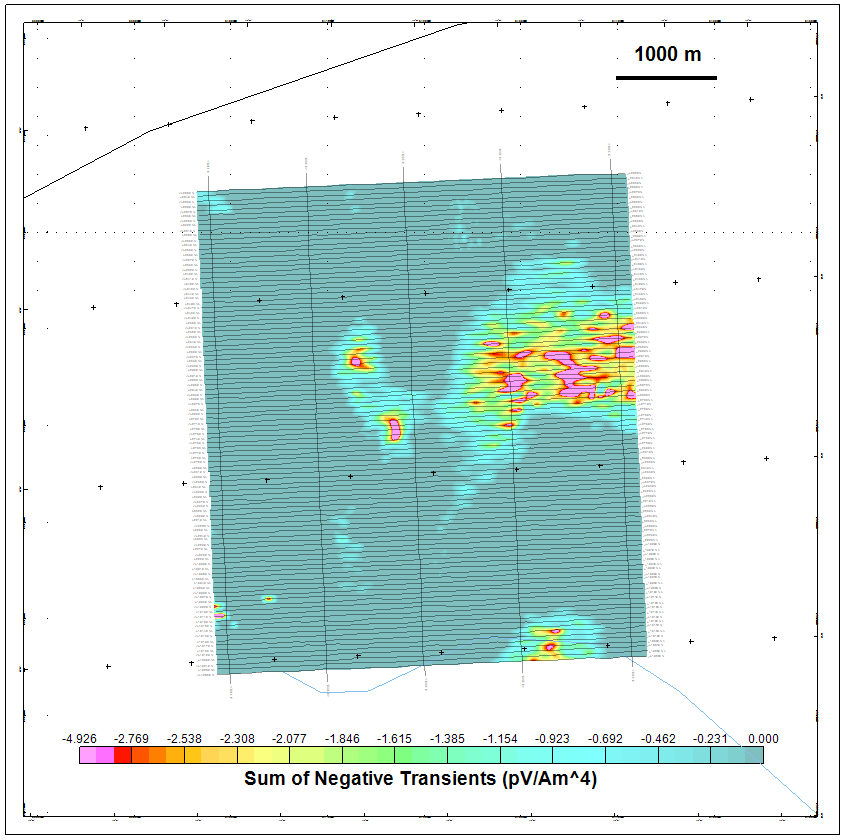 The determination of frequency factor c and time constant τ for selected VTEM data is carried out by interactive forward modelling software, using the Airbeo 1D inversion code from CSIRO (Raiche, 1998; Chen and Raiche, 1998). For a given VTEM decay, the program computes a synthetic TDEM decay for a half-space with user specified Cole-Cole parameters, and then computes the root-mean squares (RMS) error between the two. The selections of Cole-Cole parameters are performed interactively on all four parameters (ρ0, m, τ and c). The forward modelled and the measured data are displayed instantaneously, as well as the RMS error. The results of Cole-Cole forward modelling of selected VTEM decays are shown in Figure 4. 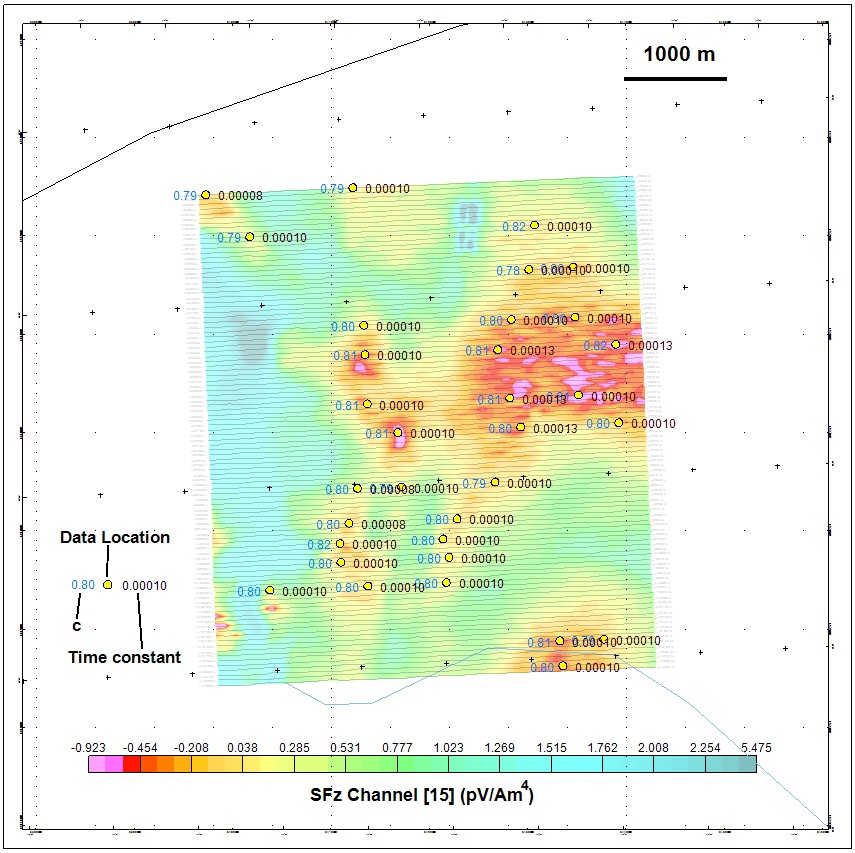 Because the frequency factor c and time constant t don’t vary significantly in the survey area, a modified algorithm was used to extract the two (ρ0, m) parameters from the VTEM data. The modified algorithm uses fixed (τ, c), i.e., τ being set at 0.0001s and c given a value of 0.8 respectively. The algorithm determines ρ0 by a series of forward modelling to fit the earliest time channel data (4th). The chargeability parameter m is found by simple search of the best fit model.

The AIIP apparent chargeability and resistivity are shown in Figure 5 and Figure 6. It is quite obvious that more than 50% of the ground is chargeable and is presumed to be related to permafrost (Kozhevnikov and Antonov, 2012). 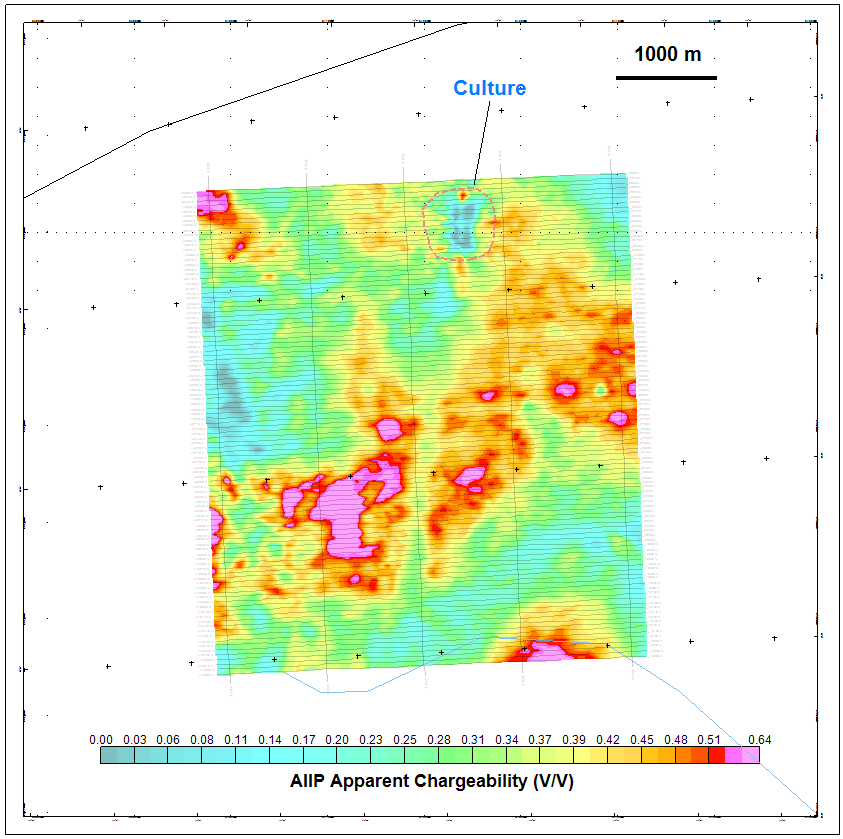 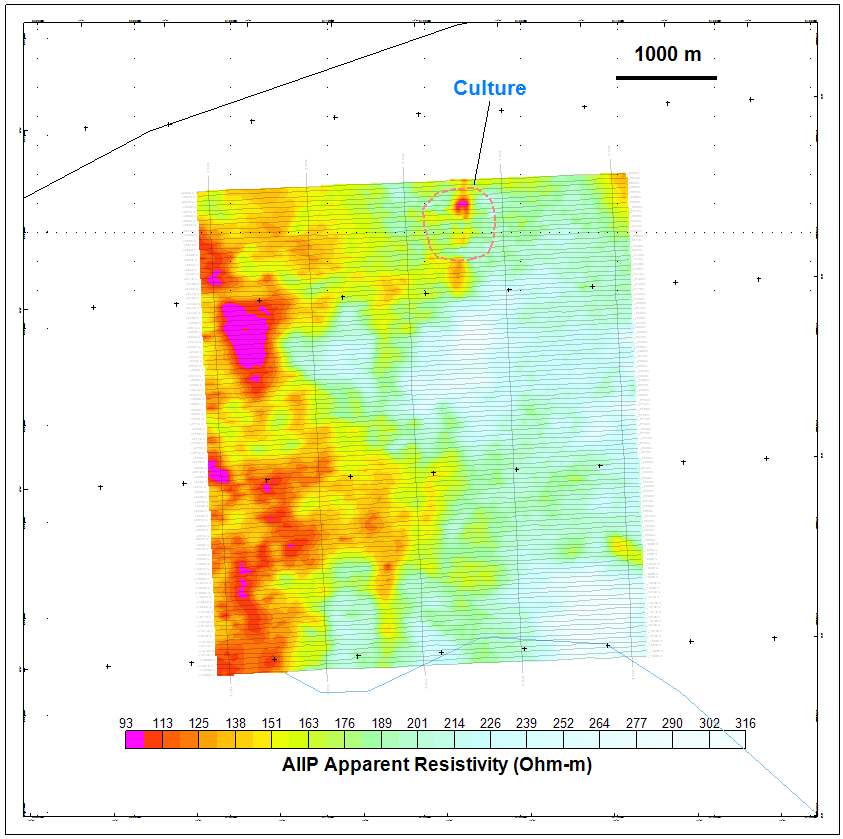 Negative transients in the VTEM data make it difficult to recover the true geo-electrical section of the ground. We have devised a method to reduce, in the first order sense, the AIIP effects in VTEM data, tailored specifically for the VTEM data from Mirny. The method recognizes the fact that the earliest available time channels and late time channels are unaffected by AIIP, and therefore, the VTEM data in those channels will remain unchanged. The removal of IIP effects in ground TDEM data has been previously demonstrated by Elliot (1991).

The AIIP removal algorithm first computes the difference between the observed VTEM decay and the calculated VTEM half-space decay. The half-space resistivity is determined using the first available off-time channel. The decay differences in the early time channels are positive, become negative if there are AIIP effects during the late-early and middle time channels, and finally change to positive in late time channels.

The negative values in the decay difference identify the time-channels affected by AIIP. The AIIP affected time channels in the observed VTEM decay are replaced by the calculated half-space decay. Thus the AIIP removals are first order corrections using half-space models. The method is trying to restore the true inductive VTEM responses of the ground at shallow depths.

Results of AIIP removal of a VTEM line at Mirny are shown in Figure 7.

Resistivity Depth Imaging (RDI), based on the method described by Meju 1998, is applied to the VTEM data before and after AIIP removal. RDI results of a selected line are shown in Figure 8. 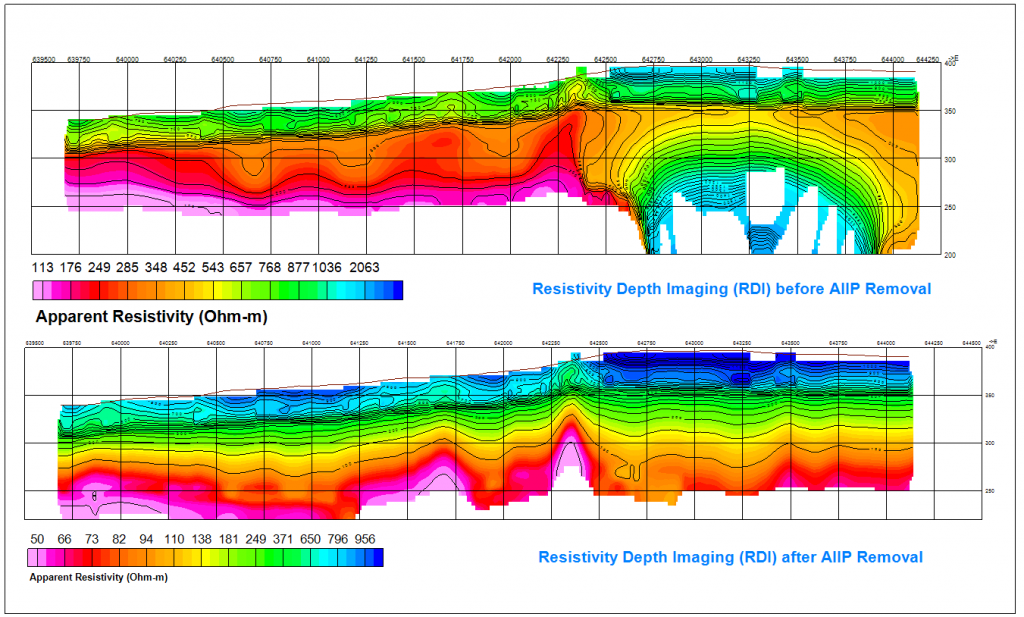 Figure 8: RDI resistivity-depth images before and after AIIP removal using dB/dt Z-component data from 18us to 400us off-time.

When c is less than 0.5 and the frequency range widens to cover more low frequencies, more and more current is carried via the Faradaic path. So the interfacial impedance varies as ƒ-1/2 (Warburg decay) to ƒ0(Ward, 1990). For VTEM data from Mirny, the interfacial impedance varies approximately as ƒ-0.8, indicating that the electric current is mostly carried across the Non-Faradaic path.

Numerous negative transients in the early to mid-time channels were observed in the VTEMTM data from Mirny, Russia. The negative transients are attributed to AIIP effects in these permafrost terrains. Cole-Cole analysis of the AIIP affected VTEM data has revealed the spectral characteristics of the ground, which possesses high frequency factor c

value of 0.8, indicating that the electric current path is Non-Faradaic

A method has been developed specifically to remove the AIIP effects in the VTEM data from Mirny, Russia, taking into consideration the fast decaying nature of the negative transients. RDI resistivity-depth results of the VTEM data before and after AIIP removal appear to validate the method for the recovery of geo-electrical section of shallow ground.

We greatly appreciate the permission granted by ALROSA to use the VTEM data for this study.

View it on the Exploration Geophysics Info Website Here: http://explorationgeophysics.info/?p=3878