Vancouver, British Columbia – Lumina Gold Corp. (TSXV: LUM) (OTCQX: LMGDF) (the “Company” or “Lumina”) is pleased to announce the results of a recent airborne ZTEM (Z-Axis Tipper Electromagnetic System) geophysical survey at the Company’s 100% owned Cangrejos Gold-Copper Project, located in El Oro Province of southern Ecuador. The ZTEM survey results highlight the remaining exploration potential on the property and show that two thirds of the prospective circular ZTEM feature have not been tested by drilling. The untested area also has a coincident anomaly of gold in soils, which add further support for the potential of the area (see Figure 1).

Marshall Koval, President and CEO commented, “The ZTEM results demonstrate the size of the Cangrejos system and the potential to expand the existing gold resources given the significant areas of the geophysical anomaly that remain untested. Having a geophysical anomaly coinciding with surface gold geochemistry delineates clear additional exploration targets with high discovery potential.” 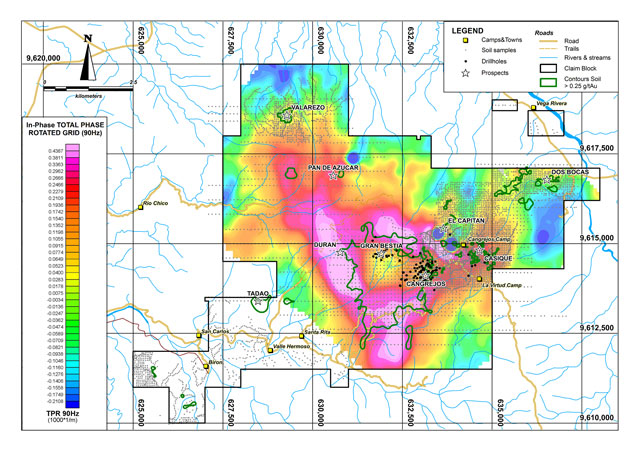 ZTEM is Geotech Ltd.’s proprietary helicopter-towed electromagnetic survey system which will detect changes in resistivity in rocks at depth. A total of 368 line kilometres were flown at line spacings of 200 metres over the southwestern two-thirds of the grid over the known showings, with 400 metre line spacings flown in the northeastern one-third of the grid. Figure 1 shows less resistive rocks in warm colors and is interpreted to be the imaging of the subsurface at a depth of 100’s of metres. In the context of a major gold-copper porphyry deposit such as Cangrejos, the pink/magenta circular feature is interpreted to represent the pyrite halo that would typically develop around the core of such deposits. This is contrasted against a more resistive core appearing as yellow/orange and surrounding bedrock.

The circular feature is approximately 4 kilometres in diameter and coincides with the approximately circular contoured 0.25g/t gold anomaly in historic soils grids, previously collected by Odin and Newmont geologists.

The location of the existing resources at Cangrejos and Gran Bestia are indicated by the plotted drill hole collars on Figure 1. Importantly, two thirds of the prospective circular ZTEM feature with a coincident gold in soils anomaly remains untested by drilling.

Favourable ring-like ZTEM features with coincident gold in soil anomalies using a 0.25 g/t gold contour occur 2.5 kilometres northwest of Gran Bestia at Pan de Azucar, where silicified boulders are observed at surface and an additional 1.5 kilometres further north at Valarezo, neither of which have been drill tested. Conductive features with gold anomalies also form a northeast trend extending from Cangrejos, through El Capitan and Casique, to Dos Bocas.

Leo Hathaway, P.Geo, Senior Vice President and the Qualified Person as defined by NI 43-101 for the Cangrejos Project has reviewed, verified and approved the contents of this news release as they relate to the ongoing exploration and development program at the Cangrejos Project.

Lumina Gold Corp. (TSXV: LUM) is a Vancouver, Canada based precious and base metals exploration and development company focused on the Cangrejos Gold-Copper Project located in El Oro Province, southwest Ecuador. Lumina has an experienced management team with a successful track record of advancing and monetizing exploration projects.

Further details are available on the Company’s website at https://luminagold.com/.

To receive future news releases please sign up at https://luminagold.com/contact.