A resistive high was defined that coincides with a large magnetic high feature in the centre of the project. A number of interesting ZTEM anomalies were identified surrounding the central magnetic feature.

Property-wide surface exploration work by Libero collected 892 surface samples in 2019 in addition to 3,671 historical samples reported on May 27, 2019. Libero’s samples were analyzed for a suite of 35 elements, allowing for multi-element characterization of anomalies. This analysis has been undertaken and 19 target areas have been identified with anomalous gold-silver-copper plus other pathfinder elements, three of which had not been previously identified. These are illustrated in Figure 1 (gold) and Figure 2 (copper).

“Late receipt of our five-year drill permit and the early onset of harsh, record winter-like conditions this past autumn limited our late season drill program”, commented Ian Slater, Chief Executive Officer. “However, we are pleased with the identification of 19 multi-element target areas at Big Red and the 2019 results have provided crucial information for defining an exciting 2020 field program.”

A ZTEM survey was flown over the Big Red property. A total of 549 line-kilometres of geophysical data were acquired during the survey with a total area coverage of 150 square kilometres. A resistive high was defined that coincides with a large magnetic high feature in the centre of the project. A number of interesting ZTEM anomalies were identified surrounding the central magnetic feature. The data is currently being interpreted.

Libero is currently integrating the results of the multi-element geochemical analysis, the ZTEM survey and additional structural and geochemical interpretation to define a 2020 field program to advance high-priority targets to drill stage through careful mapping and sampling. Specific focus will be on the Ridge high grade gold target which was not possible to drill after permits were obtained late season but will be drilled in the 2020 field season. 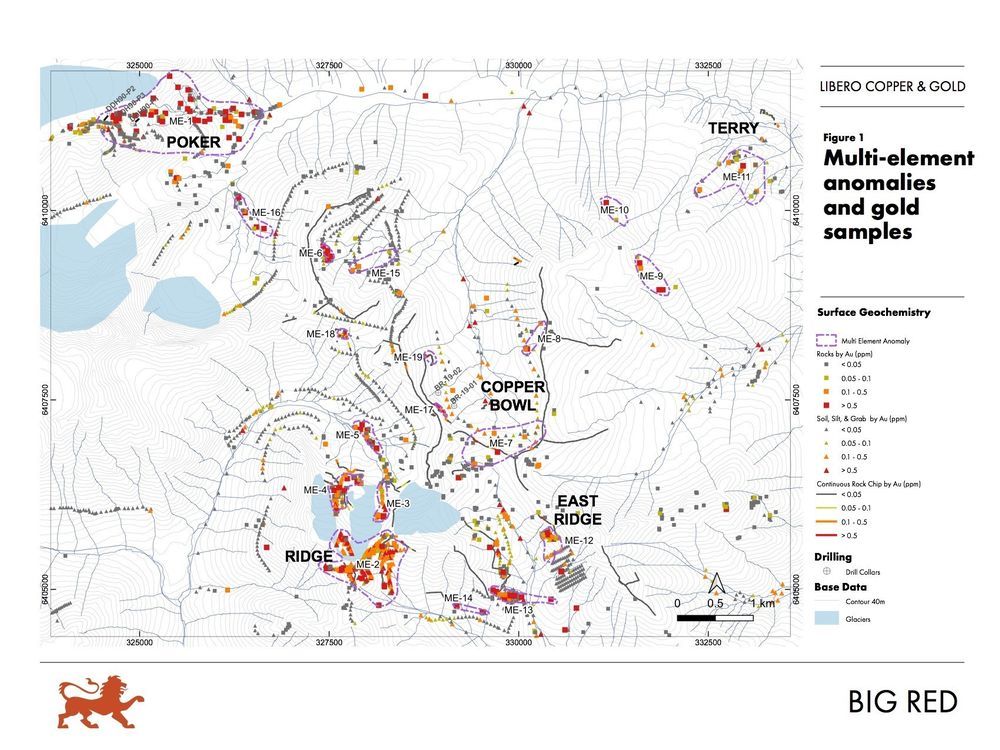 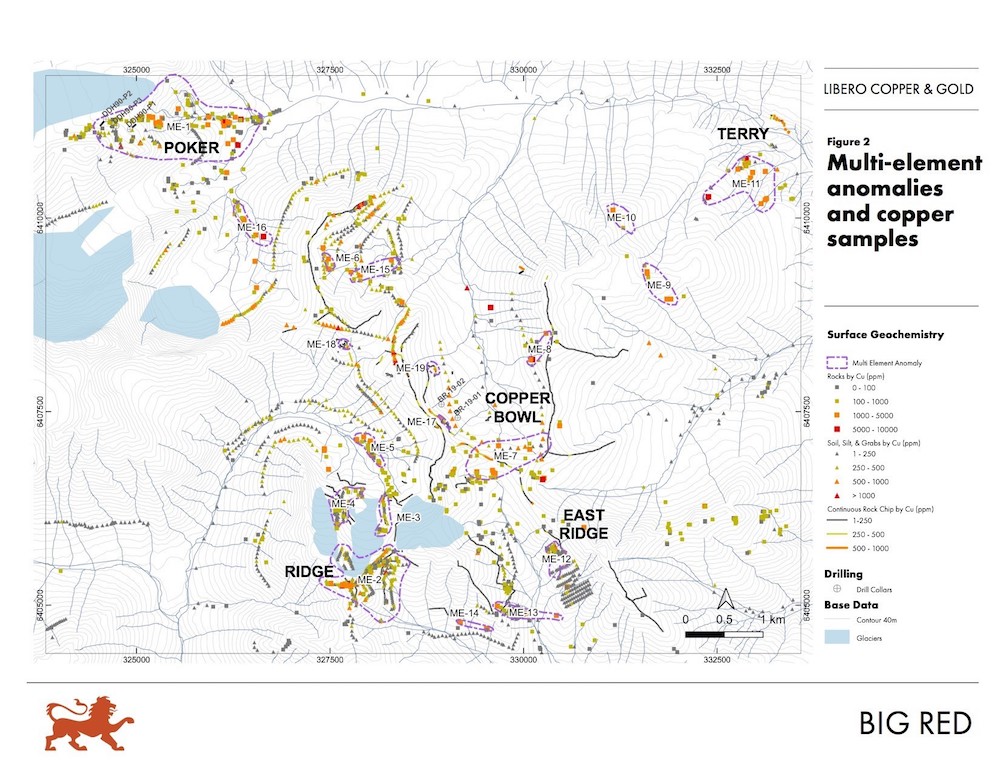 Libero attempted two core drill holes very late in the season in the Copper Bowl porphyry gold-copper target with a total of 588 metres drilled. Neither drill hole contained an intercept of economic significance although numerous anomalous intervals up to 0.1 grams per tonne gold were intercepted. Such mineralization is associated with quartz and carbonate veinlets with pyrite and chalcopyrite and potassium feldspar, carbonate and chlorite alteration, hosted mainly in monzonite. Pathfinder elements occurring with gold in drill core at Copper Bowl include silver, copper, tungsten and bismuth.

Duplicate field sampling of continuous chip samples that were highly anomalous in gold has indicated that larger sample weights produce results with a better reliability. These produced lower tenor of gold indicating a nugget effect in samples that mandates larger sample sizes to be collected on the property in the future. An explanation of the drill results is that the first hole cut quartz-sulfide veinlets at a high angle that may have caused gold-bearing structures to have been missed by the drill hole. The azimuth of the second hole was adjusted to try and intersect the veining at a higher angle, but this hole did not reach the anomalous zone due to the early onset of severe winter-like weather conditions forcing demobilization. The severe weather also did not allow access to first-choice drill pads due to avalanche risk.

The technical information contained in this news release has been reviewed and approved by Libero’s Executive Vice President of Exploration, Leo Hathaway P.Geo., who is a Qualified Person as defined under NI 43-101

All drill core sample assay results have been independently monitored through a quality control / quality assurance (“QA/QC”) program including the insertion of blind standards, blanks and pulp reject duplicate samples. Logging and sampling were completed at Libero’s facility located in Glenora, close to the Big Red property. Drill core is sawn on site and half drill-core samples are securely transported by ALS Laboratories (“ALS”) to their sample preparation facility in Vancouver, BC, where samples were crushed, pulverised and analysed. Gold content is determined by fire assay of a 30-gram charge with ICP finish. Other elements are also determined by ICP methods. Libero is not aware of any drilling, sampling, recovery or other factors that could materially affect the accuracy or reliability of the drill core data. ALS is independent of Libero.

The Golden Triangle is a geological province of prodigious gold and copper mineralisation and host to some of Canada’s most famous mines, including Premier, Red Chris, Snip, Brucejack and Eskay Creek. Within the Golden Triangle porphyry copper and gold, epithermal gold and silver and volcanogenic massive sulfide styles of mineralisation have all been recognised. At Big Red all three of these styles exist, indicating that a large mineralised system has been preserved from erosion. The primary porphyry gold-copper targets are peripheral to a distinct large magnetic-high feature and coincide with a radiometric potassium anomaly, copper, gold, silver and molybdenum anomalies and a mapped Jurassic aged porphyry intrusion. Please see Libero’s flickr site for photographs.

Libero holds a collection of porphyry deposits throughout the Americas in prolific but stable jurisdictions. The portfolio includes both exploration properties such as Big Red, a new gold discovery in the Golden Triangle, Canada, and high-quality deposits with significant resources but without any fatal flaws or significant holding costs. The Tomichi deposit in the United States and the Mocoa deposit in Colombia, both contain large inferred mineral resources. In total, the Mocoa and Tomichi properties contain 7.9 billion pounds of copper and 1.1 billion pounds of molybdenum. These assets are being advanced by a highly disciplined and seasoned professional team with successful track records of discovery, resource development, and permitting in the Americas.