Airborne electromagnetics are increasingly employed to satisfy water resources objectives worldwide. These water resources objectives include the spectrum from locating small-scale near-surface groundwater aquifers to hydrogeological mapping at a large regional scale and depth. Airborne electromagnetic platforms that are already optimised for locating conductive bodies for the mineral industries due to their high-power output and low noise characteristics are well-suited for water resources objectives. Continuous technical improvements to the signal-to-noise ratio from both early to late time windows and data acquisition methodology are important elements to maintaining a comprehensive airborne groundwater survey platform.

Geotech modified their VTEM™ system and acquisition methodology to produce an airborne EM platform to meet a wide range of water resources objectives. The resultant VTEM™ dataset has very low noise characteristics maintained from early to late time windows which are optimal for successful use in layered-earth inversion modeling interpretation commonly used in water resource applications.

Recent water resources applications of the VTEM™ system include a large-scale mapping of the Okavango Delta region in Botswana for the Ministry of Minerals, Energy and Water Affairs and the regional mapping of an area along the Taoudeni Basin boundary in Mauritania for SNIM. The main objectives of the Okavango survey are to map the freshwater-saltwater interface throughout the delta region, identify freshwater resources for exploration and regional geological mapping. The main objective of the Taoudeni Basin boundary survey was to provide a reconnaissance of the hydrogeological framework in a geologically complex region. VTEM™ surveys in both instances yielded highly successful results. Both surveys have been conducted with COWI as a groundwater interpretation partner.

The VTEM system has a 26 metre diameter, vertical axis, 4 turn transmitter coil and can produce over 500,000 NIA of dipole-moment. The vertical axis receiver coil is deployed in the middle of the transmitter coil giving a symmetric response. The horizontal in-loop geometry is well suited for sounding applications. The pulse shape is elongated to approximate a step response as much as possible. The VTEM™ transmitter is digitally controlled and can easily operate in a variety of base frequencies, using different pulse widths.
The VTEM™ system has been designed for mineral exploration with a wide conductivity aperture optimized to detect and resolve poor to good sulphide conductors. In mineral exploration, the conductivities of interest range from 0.1 S/m for poor sulphides such as sphalerite in stringer form, to over 1000 S/m for copper and nickel sulphides. The low base frequency, long pulse width, and the derived B-field are techniques used to better detect and resolve high conductivity targets.

The interest for water resources airborne electromagnetic surveys include high-resolution mapping of resistivities both at the near-surface as well as at great depth. Near-surface imaging requires an early time acquisition capability not needed in mineral surveys. Depth penetration is required to give water resource managers a new look into more complex deep-lying hydrogeology targets of interest. To make the VTEM™ platform a comprehensive system to meet both objectives technical modifications were initiated.

For low conductivity mapping applications, measurements as close to the current turn-off are best. Geotech modified the standard VTEM™ system to expand the capability to survey earlier time windows. The modifications required experiments which included testing of a number of different transmitter pulses, power settings, and changing the receiver location with respect to the transmitter. The bandpass of the system filters had to be adjusted so as not to distort the early time channels. With the change in the system response, the derived B-Field was no longer available due to the non-linearities that were introduced into its calculations.

The resultant changes in instrumentation allowed for the addition of extra early time windows between the current turn-off and the standard 110 us time-gate. The modifications resulted in very low-noise characteristics throughout early to late times as shown in a typical log-log decay curve from the Okavango survey shown in Figure 1. 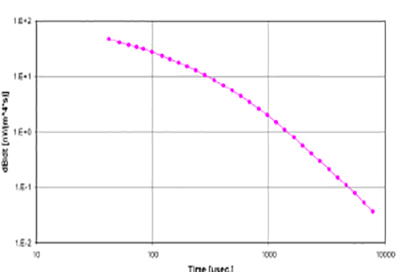 Figure 2 shows the 62 micro-second time channel obtained from the modified VTEM™ system. The flight lines are spaced two kms apart and so the data is not presented as a grid. The validity of the readings is evident from the coherent responses obtained and correlation with surrounding topography. 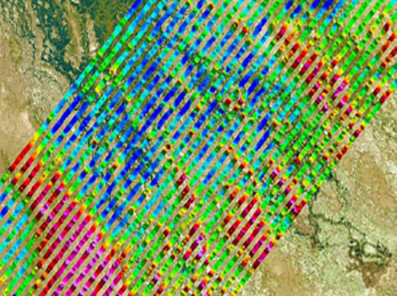 The data undergo either Laterally-Constrained Inversion (LCI) along profile lines or Mutually-Constrained Inversion (MCI) in 3D space. The difference from 1D inversion is that the method ensures limited variations in individual 1D-models through the use of so called bands. These vertical and horizontal bands ensure that model result do not vary too much between the different coupled 1D-models. This reduces the equivalence problem significantly. A concurrent effect is that measurement noise is reduced. The white noise in the measured values will be reduced in the averaging process in the combined MCI-inversion.

The results are distinct layer depths and resistivities. The desired result for the Okavango Delta project is the development of highly reliable maps of the depth to saline waters and the transition zone between the fresh and saline water.

Geotech conducted a 16,500 line-km VTEM™ survey of the Okavango Delta region in Botswana in 2008. The survey included 2 regional survey blocks at 2 km line spacing and two high-resolution blocks at 500 m line spacing. COWI has performed the layered-earth inversion interpretation and developed a GIS-based visualization tool for the water managers and researchers to visualize and utilize the survey results.

In the Okavango Delta region the sedimentary aquifer system consists of Kalahari sand beds consisting of fluvial and lacustrine sediments, aeolian sands, silcretes and calcretes. Within the delta the unconfined sandy aquifers are composed of freshwater (salinity around near 0 mg/l) while the deeper aquifers are generally saline or brackish (5 g/l or more). The transition from freshwater to brackish water generally occurs at shallow depths of up to tens of meters. Previous research has shown the presence of salinity plumes that are of significant interest to researchers studying the freshwater-saltwater mechanisms in the delta. Due to difficulties in locating freshwater in the region the water resource manager requires a freshwater picture of the region so that he can direct further follow-up geophysical or drilling campaigns to expand the freshwater supply. The modified VTEM™ system mapped the entire survey in one standard time-window configuration of 21 μs to 7.8 ms over 33 channels. This resulted in meeting both objectives at far ends of the data acquisition spectrum. 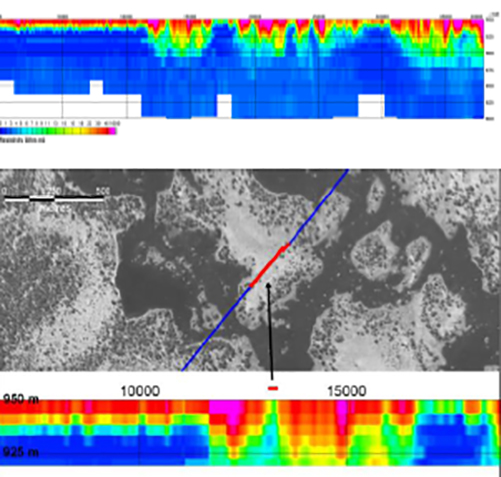 Figure 3. 2D-LCI results along a VTEM™ survey line across an inland deltaic environment show the freshwater-saline interface. A close-up view of the profile highlighted in the overhead photo illustrates the near-surface lateral resolution.

The early time windows and low-noise characteristics resulted in high vertical and horizontal resistivity imaging of the near-surface between the deltaic islands and channels. The regional block surveys were inverted using a multi-layer laterally-constrained inversion. An example of a 2D LCI profile is shown in Figure 3. A close-up of the 2D LCI profile displays the near-surface lateral resolution capability using the result across a typical deltaic island.

An important consideration in airborne electromagnetic surveys for groundwater objectives is the delivery of results in a format that will be readily understood and of continuous usefulness to water managers and follow-up researchers. An airborne electromagnetic survey will often comprise the initial regional view of a study area for water managers. The airborne survey results will often be used for detailed planning of follow-up investigations. Therefore there is a need for the water managers to receive the survey results in a format that optimizes their utility. Survey results can then be delivered in an interactive GIS system in which the user chooses the data perspective to view. Figure 4 shows a snapshot from the Okavango Delta GIS platform showing the layered-earth inversion profiles along the survey flight paths. Other GIS platform perspectives include time gate maps, interval resistivity maps, magnetic maps and existing geophysical data overlayed upon selected background maps. 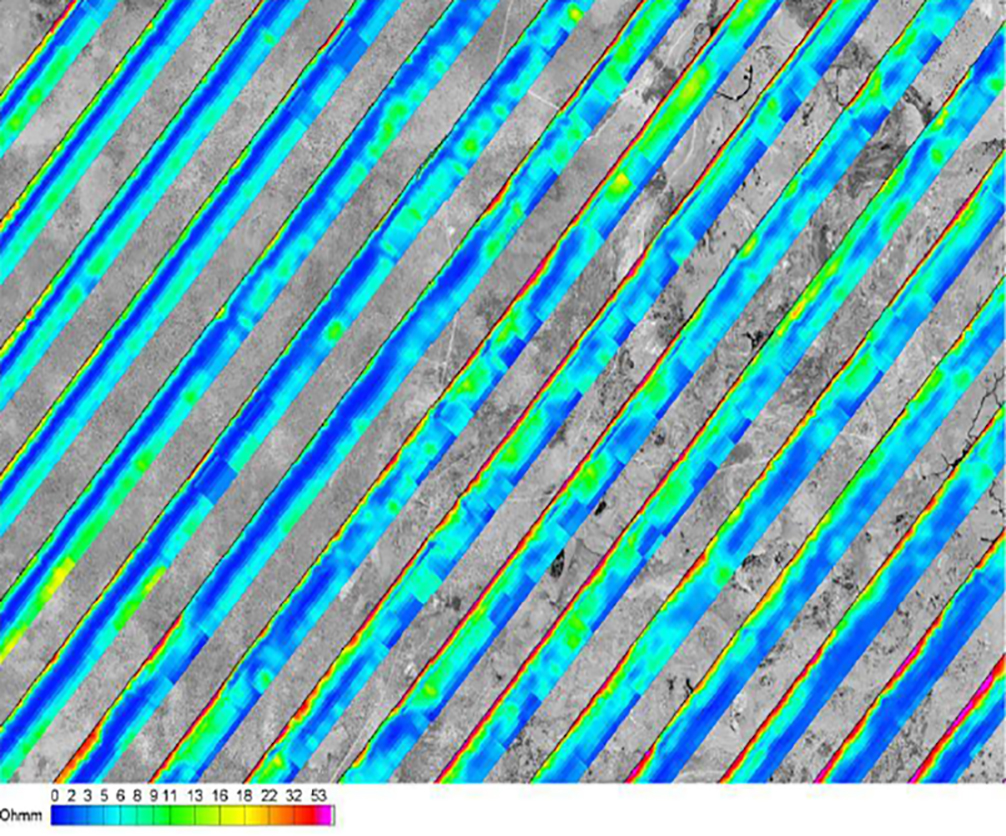 Figure 4. This snapshot shows multi-layer 2D laterally-constrained inversion profiles in a 364 km2 area taken from the Okavango Delta AEM geo-information system. Each profile shows 100 m deep section and is depicted along the flightpath (ground surface on leftmost side corresponds to the flightpath). The line spacing is 2 km.

Airborne electromagnetics was selected for this study as it provides the geophysical datasets at sufficient scale and cost-effectiveness needed to trace the freshwater-saltwater interface throughout the entire delta region and map the salinity plumes formed downstream of islands that have undergone extensive evapotranspiration. The high-definition resistivity imaging of the salinity plumes is the objective of one of the high-resolution survey blocks which are presently undergoing pseudo-3D Mutually-Constrained Inversion. The resulting datasets will prove essential inputs for researchers developing hydrologic models aimed at improving predictive capacity for the sustainable management of the Okavango Delta.

In 2007 Geotech performed a reconnaissance survey of an arid region at the edge of the Taoudeni Basin in Mauritania. The objective was to provide a regional overview of an area of interest for expanding groundwater abstraction fields. The survey area is geologically complex which has proven difficult to image with standard ground-based geophysical methods and geological modeling from drilling information. The complexity is due to the series of horst and graben structures with the hydrogeological targets of interest being the sedimentary sequences within the graben structures. The significant variation in sedimentary thickness parallel to the graben structures adds to the complexity. To reduce costly drilling and better plan follow-up geophysical surveys an airborne electromagnetic survey was conducted. Preliminary results are shown in Figure 5. The profiles show the results of a multi-layer laterally-constrained inversions of two 125 km long profiles spaced one kilometer apart. Successful correlation of shallow existing drillings was made using the inversion results. The resulting geophysical interpretation provided a regional perspective not available before to the client and a dataset from which they could then plan verification drillings and follow-up geophysical campaigns to locate favourable hydrogeological targets.

Geotech’s modified VTEM™ system generates geophysical datasets with low noise characteristics from early to late time channels. This capability is optimal for water resource objectives where high-resolution resistivity imaging from both the near-surface to great depth is paramount. Recent applications show the combined VTEM™ platform and 2D LCI and pseudo-3D MCI interpretation method to be successful in achieving a scale of groundwater objectives.

The authors thank their employers, Geotech, COWI and Geo Equipment Manufacturing for permission to publish and present this paper. The various datasets were released by the Ministry of Minerals, Energy and Water Affairs, Republic of Botswana and the Societe Nationale Industrialle et Minere.