The amount of multi-disciplinary (geology, geophysics, remote sensing, etc.) and multi-parameter geophysical (potential field, EM, gamma-ray spectrometry, etc.) data available for mineral exploration is ever increasing. The integration and analysis of the data require effective and efficient search engines or data mining tools. The search engines will take the signatures of known mineral deposits or interpreted mineralization targets (“key words”), search the data space and return potential new targets (“matches”), thus providing locations to the decision makers for follow-up. Two supervised feed-forward multilayer neural network (NN) search algorithms will be presented and analysed. The utility of the NN search tools will be demonstrated with the integration and analysis of airborne electromagnetic (EM), magnetic and radiometric data for mineralization targets in Iullemmeden Basin, Niger.

Integrated airborne geophysical surveys routinely acquire multi-parameter data. Regional and national governments are releasing non-proprietary datasets, including geophysics and geochemistry, and compiling databases of known mineral deposits, (Barnett and Williams, 2012). The amount of multi-disciplinary (geology, geophysics, remote sensing, etc.) and multi-parameter geophysical (potential field, EM, gamma-ray spectrometry, etc.) data available for mineral exploration is ever increasing. The integration and analysis of the data for mineralization targeting require effective and efficient search engines or data mining tools. The ideal search engines will take the signatures of known mineral deposits or interpreted mineralization targets (“key words”), search the data space and return potential new targets (“matches”), thus providing locations to the decision makers for follow-up. In the words of Barnett and Williams (2012), “the most critical decision in exploration is deciding where to look.”

In order to analyse multi-disciplinary or multi-parameter datasets, more general and powerful search engines are required. Supervised neural network (NN) appears to be an ideal search engine for mineral exploration because it possesses the following characteristics discussed in Kasabov (1996):

NN search engines have been used by Brown et al. (2000), Reford et al. (2004) and Barnett and Williams (2006, 2008) to analyse multi-disciplinary and multi-parameter datasets for mineral targeting.

Two supervised feed-forward multilayer NN search algorithms, recently incorporated into the NN suite described by Reford et al. (2004), will be presented and analysed. The utility of the methods will be demonstrated with the integration and analysis of airborne electromagnetic (EM), magnetic and radiometric data from Niger for mineral exploration targets in Iullemmeden Basin, Niger.

The supervised feed-forward neural networks belong to a sub-class within the domain of artificial neural networks (Figure 1). The word “supervised” means that the training data are specified by the user.

A simple feed-forward neuron, known as a perceptron and first described by Rosenblatt (1958), consists of a scalar input p, a scalar weight w, a scalar output y,

where f is the transfer function. A number of perceptrons can be combined to form a layer of neurons, which can take multiple inputs. A bias can also be added at the summing junction for each perceptron. 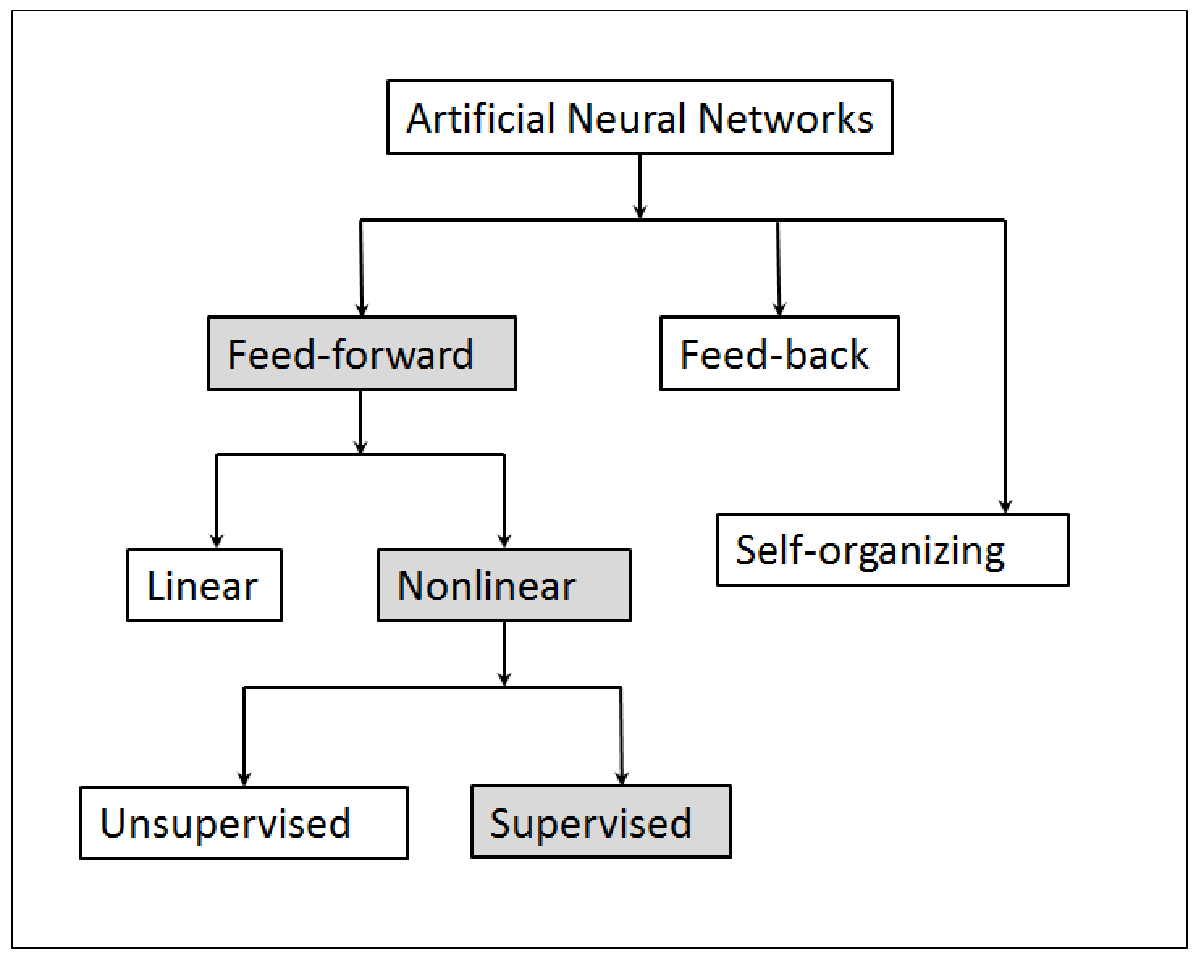 A simple feed-forward neural network can consist of just the input and output layers. The most important parameters in a neural network are the weights (Kasabov, 1996). Weights can be obtained by training. There are a number of ways to train a neural network (Haykin, 1999). They include the error-correction and memory-based learning.

Two neural networks are presented and discussed here. The first one is the simple two-layer feed-forward neural network trained by Levenberg-Marquardt (Levenberg, 1944 and Marquardt, 1963) error-correction algorithm (LMNN). The second neural network implemented is the fast classification neural network (FCNN) described by Tang and Kak (2002), which is trained by the memory-based learning method.

The architecture of a feed-forward two-layer neural network, trained by Levenberg-Marquardt error-correction scheme, is shown in Figure 2. In the input layer, the inputs x, scaled by input weights w, and input biases a are fed into the input transfer function f, producing the first outputs h. The output layer consists of the output transfer function g and the output biases b. The final output g is simply the output of g with the vectors h and b as inputs. 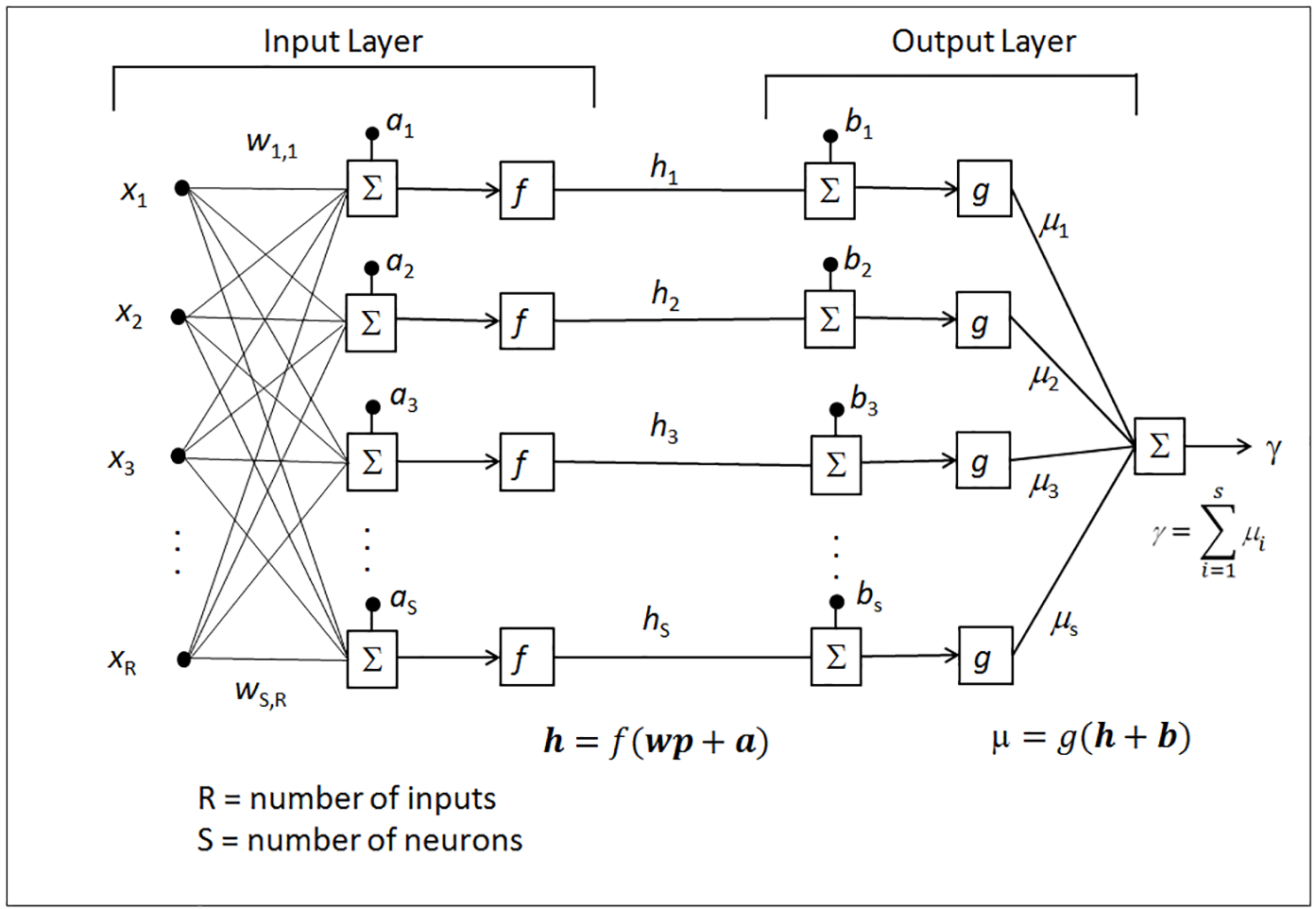 It is worth mentioning here that the Levenberg-Marquardt error-correction method is very fast.

The architecture of the fast classification neural network of Tang and Kak (2002) is displayed in Figure 3. The neural network consists of input, hidden and output layers, plus a rule base. There are two sets of weights, input weights and output weights . The hidden layer incorporated the biases , the so-called radius of generalization.

The training of FCNN consists of two steps. During the first step, the input and output weights are prescribed simply by inspection of the training input/output pairs, i.e.,

FCNN simply uses the input and output weights to memorize the training data, thus the so-called memory-based learning. In the second step, the radius of generalization of each hidden neuron is determined, accomplished by another presentation of the training data. 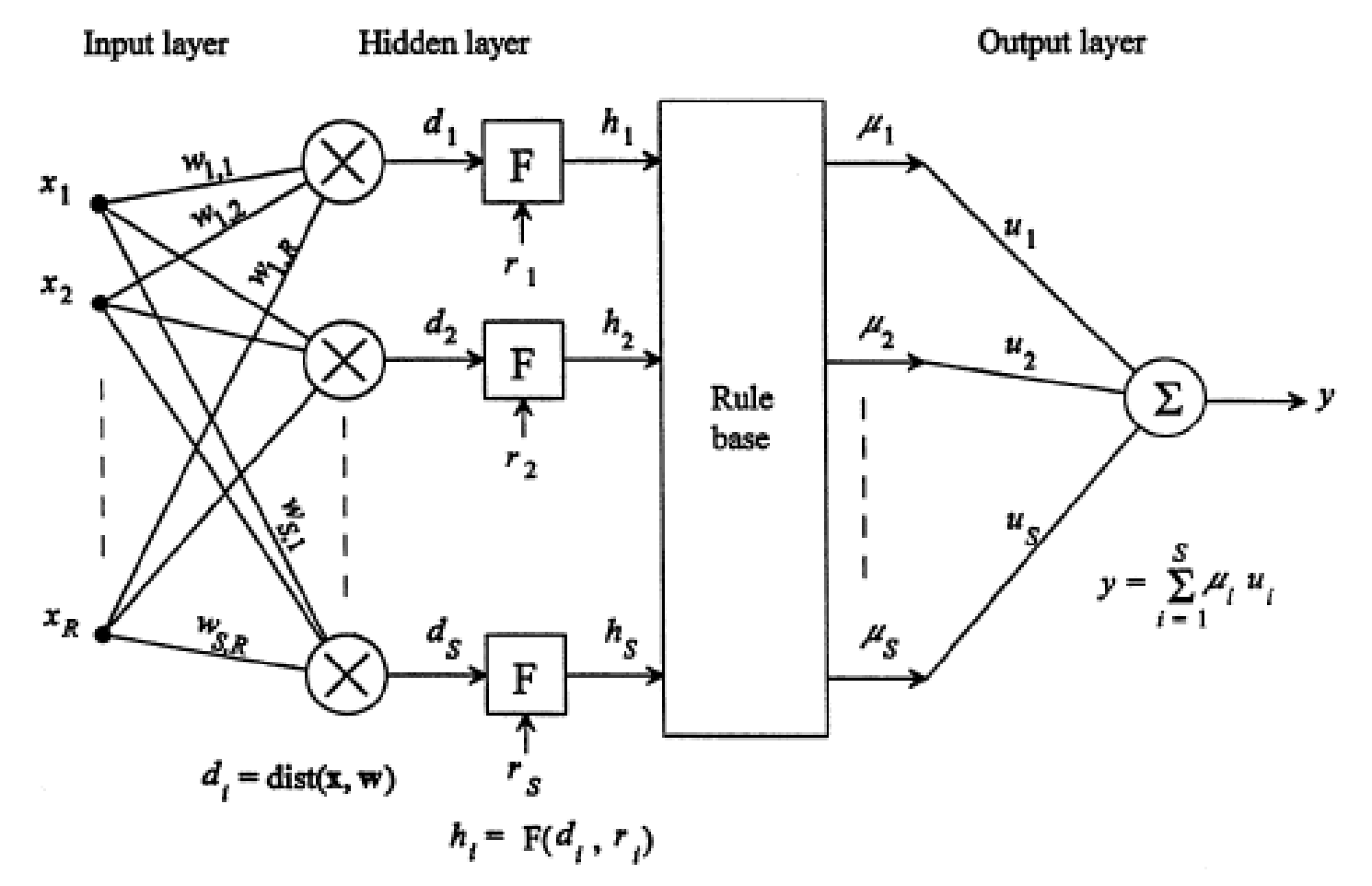 Figure 3: The structure of the fast classification neural network, from Tang and Kak (2002).

The rule base consists of the so-called membership grades, or the degree to which the input x belongs to the output classes, , which is assigned a value using either single-nearest-neighbour or k-nearest-neighbour rule, depending on the number of hidden neuron outputs, , that equal to 0.

Tests of LMNN and FCNN were conducted using synthetic data, and the search results are shown in Figure 4. The input data must be in grid format. The outputs, the degree of similarity between the grid location and the target, scaled between 0 and 1 (or 100%), are stored in a database. Before running a neural network search, three data processing steps have to be applied.

The target and training areas can be defined using polygons. The grid values in the target area are equal to 1, and those outside the target are set to 0. The target can be a known mineralization or an interpreted one, and it should be focused.

Reford et al. (2004) describe the necessity to pre-process the input data and prepare grids that should best discriminate the target of interest rather than simply utilize the measured data grids. 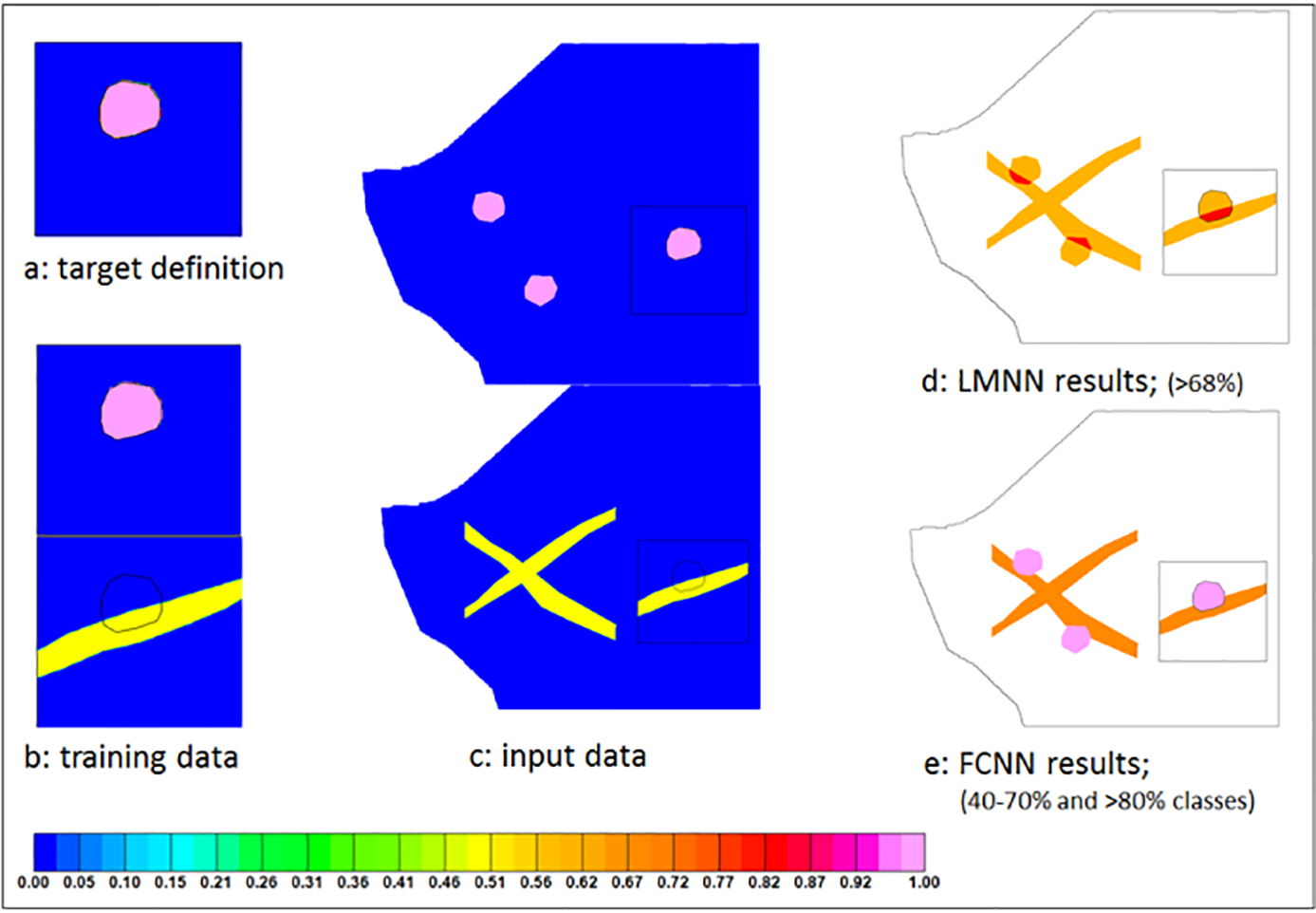 The Precambrian Liptako basement formations outcrop in the western portion of the basin and consist mainly of Birimian volcano-sediments and Proterozoic intrusive formations. The area belongs to the Liptako Metallogenic Province, which hosts several hundreds of mineralized occurrences, including precious and base metals, PGE and REE mineralization (Figure 9).

The West African Craton (WAC) is a well-known kimberlite province. Given the survey area being in or close to the WAC, the potential for locating kimberlitic pipes in Liptako basement is high.

The airborne geophysical data were screened for various types of mineralization potential by the neural networks.

The magnetic data, analytic signal and the first vertical derivative, from the western part of the survey belonging to Liptako basement formations were screened for kimberlite potential by FCNN. The target is a pipe-like body interpreted by the Keating method (Keating and Sailhac, 2004), and the search results are shown in Figure 5. The displayed results belong to a class of NN similarity values between 75% and 80%. FCNN is able to identify a new potential kimberlite target, besides the interpreted one. The linear features in the results are due to the dolerite dykes. 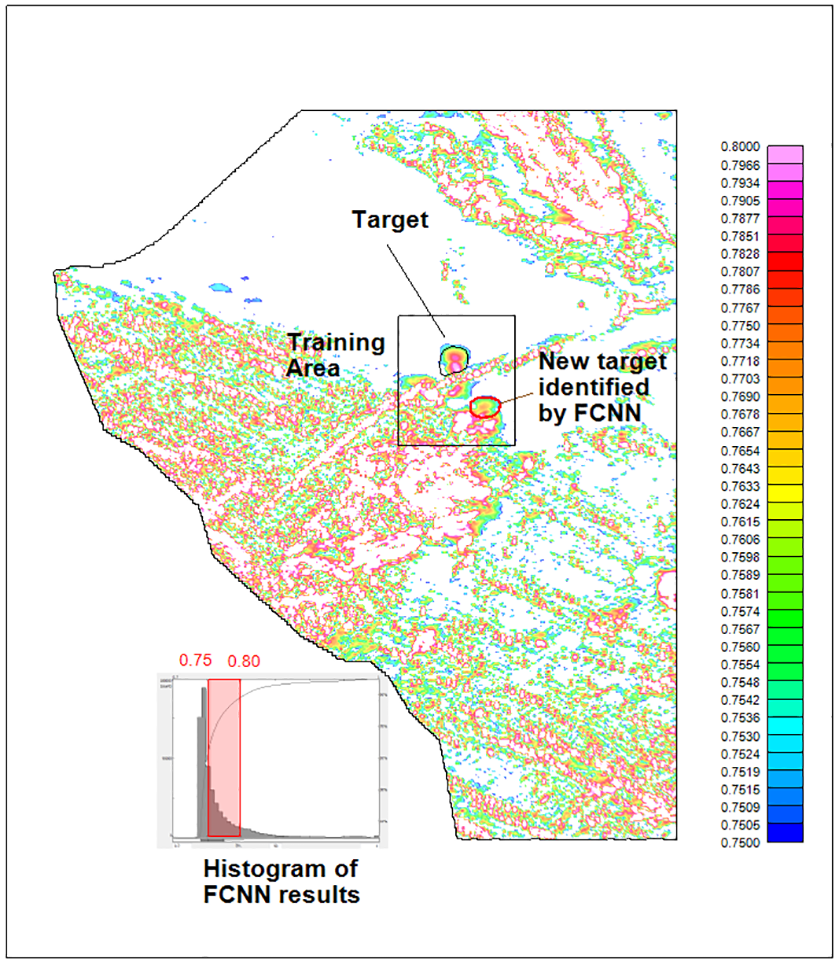 The magnetic data, consisting of analytic signal, total horizontal gradient of the tilt-angle, second vertical derivative and total horizontal gradient, are search by LMNN for potential iron ore deposits in the central part of the survey area. The search results help to identify four potential iron ore prospects for follow-up (Figure 6). The target chosen to train the neural network is located in an area with high magnetic gradients. The cut-off of the results for target selection is 54%. 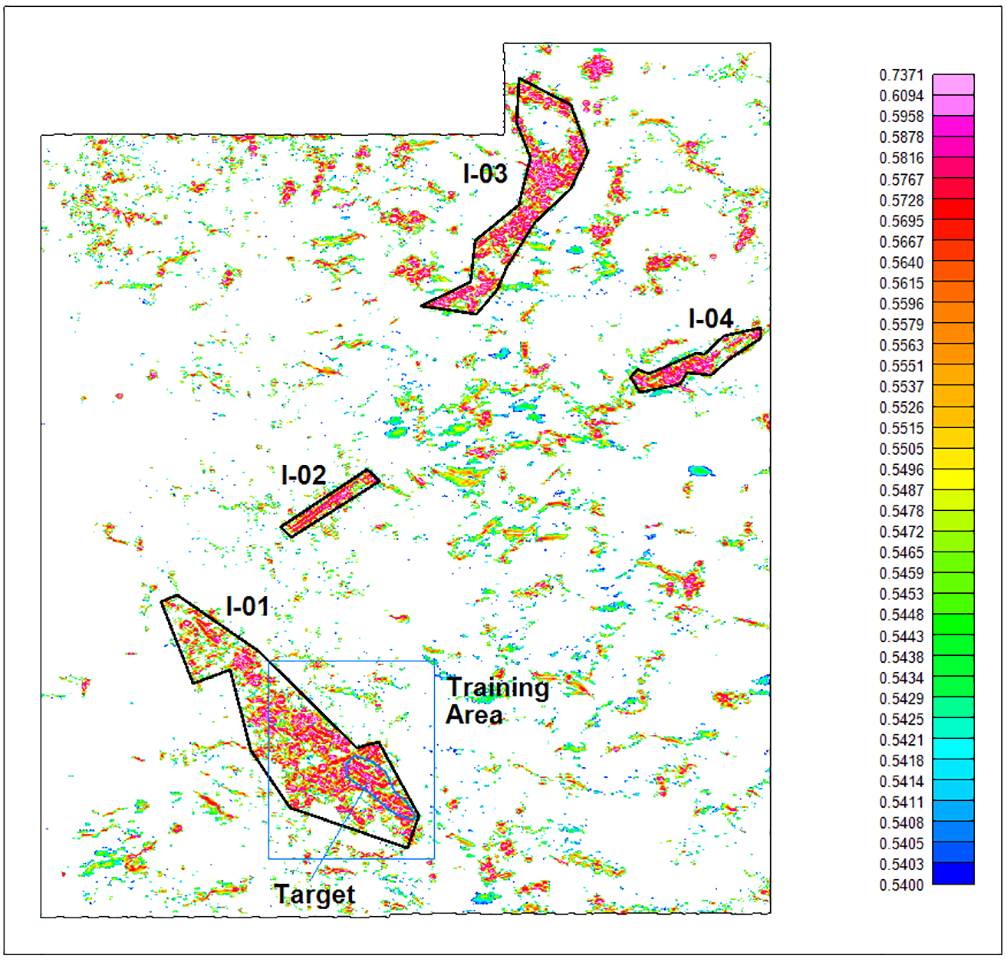 Phosphorus (P) is a major element for fertilizer, along with nitrogen (N) and potassium (K). There are many phosphate deposits in sub-Saharan countries, including Niger. In the eastern part of the survey area, phosphate nodules occur in flat-lying Upper Cretaceous to Eocene sediments, deposited in tropical to sub-tropical shallow marine environments. The nodules are encountered with attapulgite as the main clay mineral, which is moderately conductive, and high in hematite content (13%), which is moderately magnetic. Furthermore, phosphrites in general can accommodate a substantial amount of uranium, due to the crystal structure of apatite where uranium substitutes calcium. As a result, phosphates show elevated radioactivity. 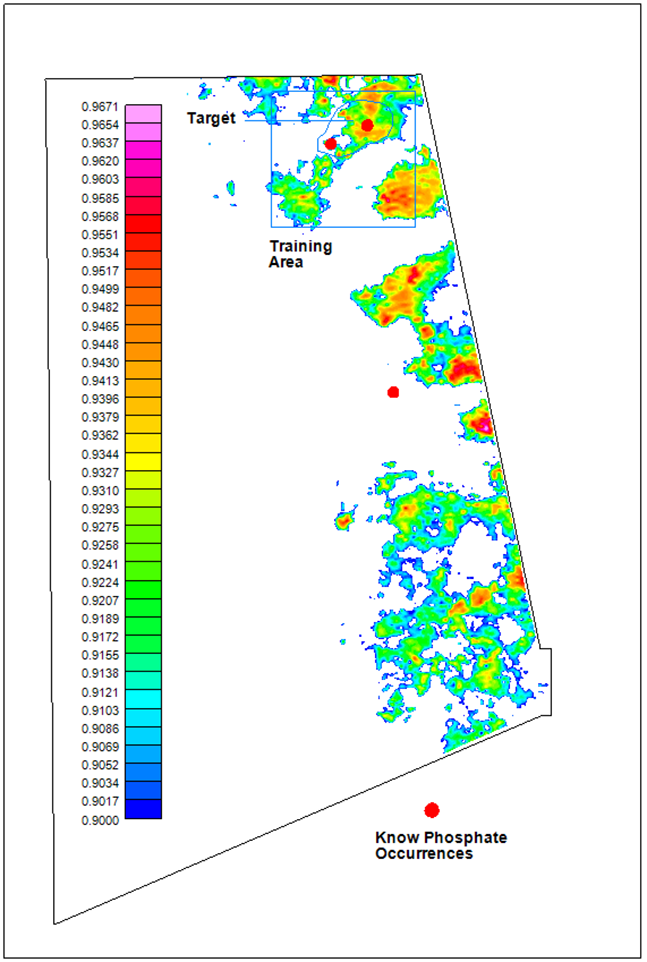 Precious and Base Metals Potential in Liptako

The LMNN method was used to analyse the fixed-wing magnetic and radiometric data, incorporating geology, to assess the precious and base metals potential in the western part of the survey, which belongs to the Liptako Metallogenic Province. The geology is interpretatively transformed into numerical form. Regions with high values are favourable for potential mineralization. The input data include the analytic signal, second vertical derivative, magnetic susceptibility depth slice at 1500m below ground (derived from magnetic 3D inversion), radioelement ratios of percent potassium over equivalent thorium concentration, equivalent uranium concentration over equivalent thorium concentration, and finally the digitized geology. The LMNN search results, with cut-off of 67%, are displayed in Figure 10.

Some of the NN solutions are in close proximity to known mineral occurrences. Others aren’t and those should be followed-up.

This case demonstrates the ability of NN search engines to work with multi-disciplinary data, such as geology. The digitized geology acts as a target selection screen. Similar screens can be devised, using drilling or soil sampling data, for example. 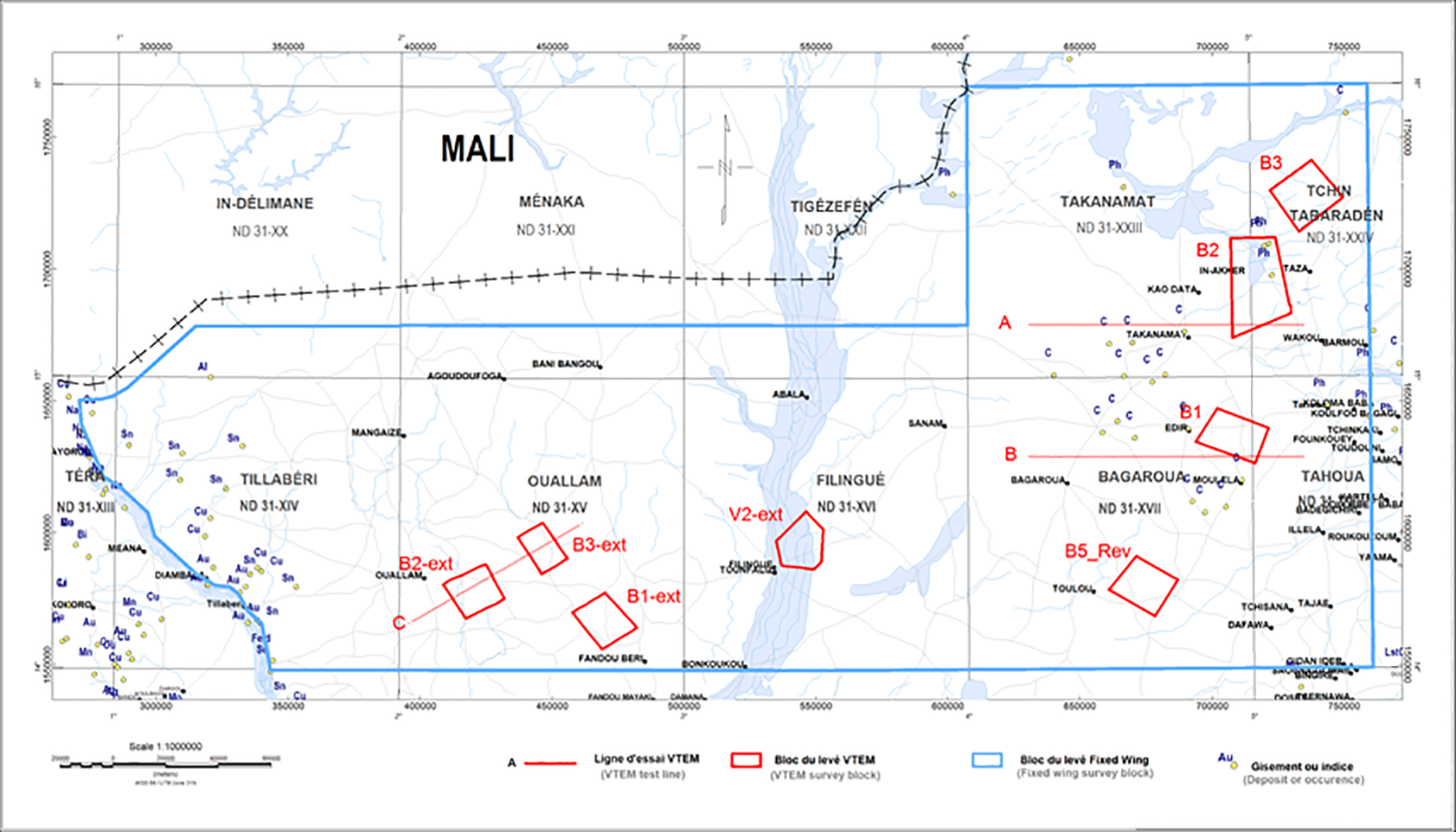 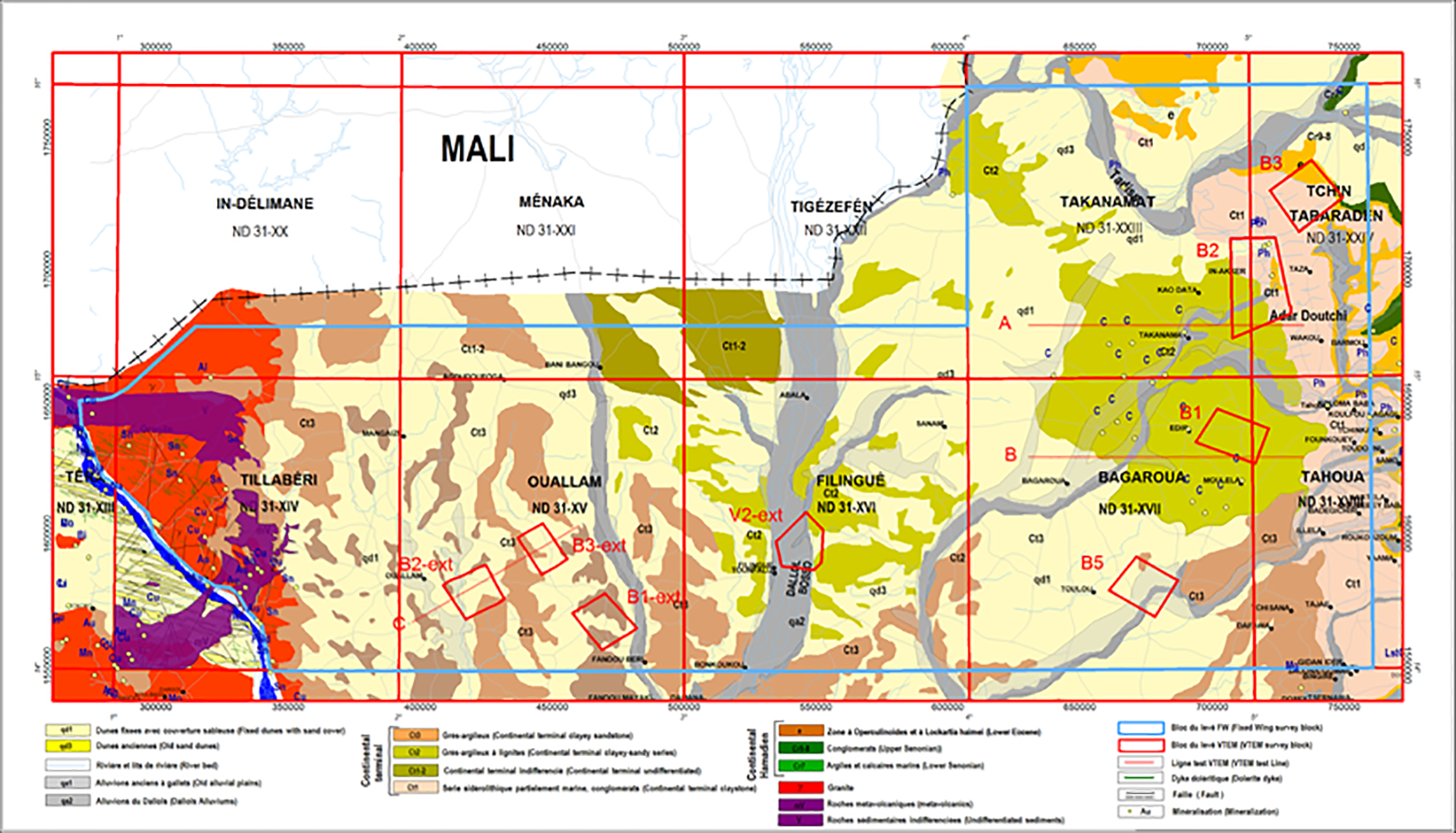 Figure 9: Geology of, after Greigert (1966), and mineralization occurrences in the Iullemmeden Basin. 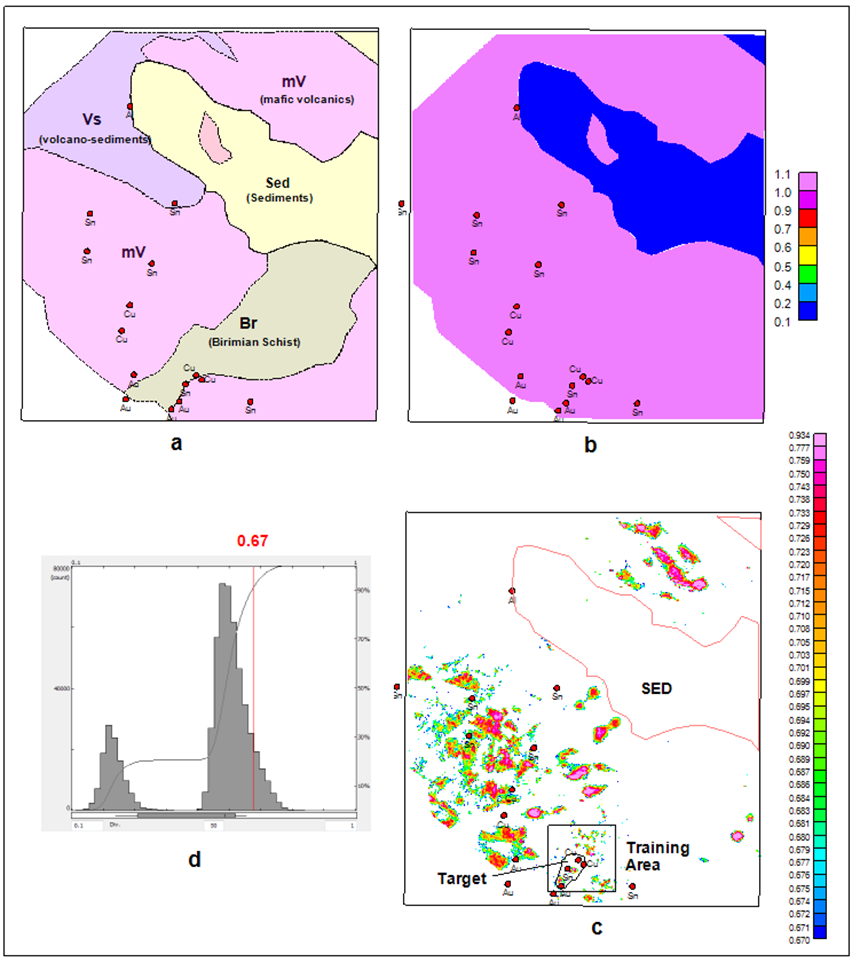 Two neural networks, LMNN and FCNN, are presented and analysed using synthetic inputs. The utility of the NNs as search engines for mineral targets is demonstrated with the integrated analysis of airborne geophysical data from Iullemmeden Basin, Niger. The classification capability of the FCNN is particularly suited for the search of kimberlites. Supervised neural networks are powerful search engines for analysing multi-disciplinary and multi-parameter datasets and generating a variety of potential exploration targets for follow-ups. Additional applications of these techniques in Niger showed their effectiveness for mapping geological formations as well.

If exploration target selection can be reduced to a process of elimination, then various selection screens can be setup, using geology, soil sampling, drilling or other data, and be applied either during the NN search or post search. Ultimately, the responsibility of final target selection should always rest with the interpreter.

One of the advantages of NN search engines is their ability to scan through large datasets quickly and in a unified framework. The results from NN search engines are just yet another layer of information for the interpreter to consider.

We would like to thank the Ministry of Mines and Industrial Development, Republic of Niger, for permission to use the airborne geophysical survey data from Iullemmeden Basin, Niger, for this study.

Barnett, Colin T. and Williams, Peter M., 2012, A radical approach to exploration: Let the data speak for themselves!, Society of Economic Geologists Newsletter, No 90.

Levenberg, K., 1944, A method for the solution of certain problems in least squares, Quarterly of Applied Mathematics, 5, 164-168.

Rosenblatt, F., 1958, The perceptron: a probabilistic model for information storage and organization in the brain, Psychological Review 65, 386-408.