Results from a regional passive airborne EM and magnetic survey in Selwyn Basin obtained in 2008 that were recently purchased by the Yukon Geological Survey and publically released in November, 2013 have been analyzed from an explorer’s perspective. The analysis highlights a strong correlation between regional conductive trends and the distribution of mineral occurrences in the region. Genetic similarities between Carlin-style gold deposits in Yukon and Nevada, where regional geologic trends are well recognized, underline the potential importance of the AEM defined conductive trends in Selwyn Basin and elsewhere.

The Selwyn Basin (Fig. 1) is a large northwest trending Paleozoic deep water sedimentary basin hat extends for 1000’s of km from Alaska, through Yukon and western Northwest Territories (NWT) and into northern British Columbia (Goodfellow, 2007). In 2008, a 25,000 km2 area of Selwyn Basin in east central Yukon and western NWT, northeast of Ross River (Fig. 1-2), was overflown in a regional airborne geophysical survey contracted by a private mining company (Witherly, 2013). The survey consisted of 24,675 line-km of helicopter ZTEM (z-axis tipper electromagnetic; Lo and Zang, 2008) and magnetics. In November, 2013, after purchasing the survey data and having them reprocessed, the Yukon Geological Survey (YGS) released them to the public (McFarlane and Nordling, 2014). These data were compared to the known geology and mineral resources, and analyzed from an explorer’s perspective by Carne et al. (2013) and are presented in this study.

The Selwyn Basin is a northwest trending Paleozoic deep water sedimentary basin mainly composed of black shales and cherts of Ordivician to Devonian age (Fig. 2). The basin is unconformably underlain by Hadrynian-Cambrian- age basement grit rocks that form part of the continental margin. The Selwyn Basin consists of a lower section of Early Ordivician to Early Devonian mudstones, siltstones, carbonates, chert and minor sandstone. The upper section consists of Devonian to Mississippian and Early Triassic mudstones and siltstones, with more abundant sandstones and conglomerates. The Selwyn Basin rocks were deformed and metamorphosed during the Mesozoic. Cretaceous granitoid intrusions also occurred during this tectonic event. Except for fold and thrust deformation and metamorphism to greenschist facies, the Selwyn Basin is relatively well preserved (Goodfellow, 2007). 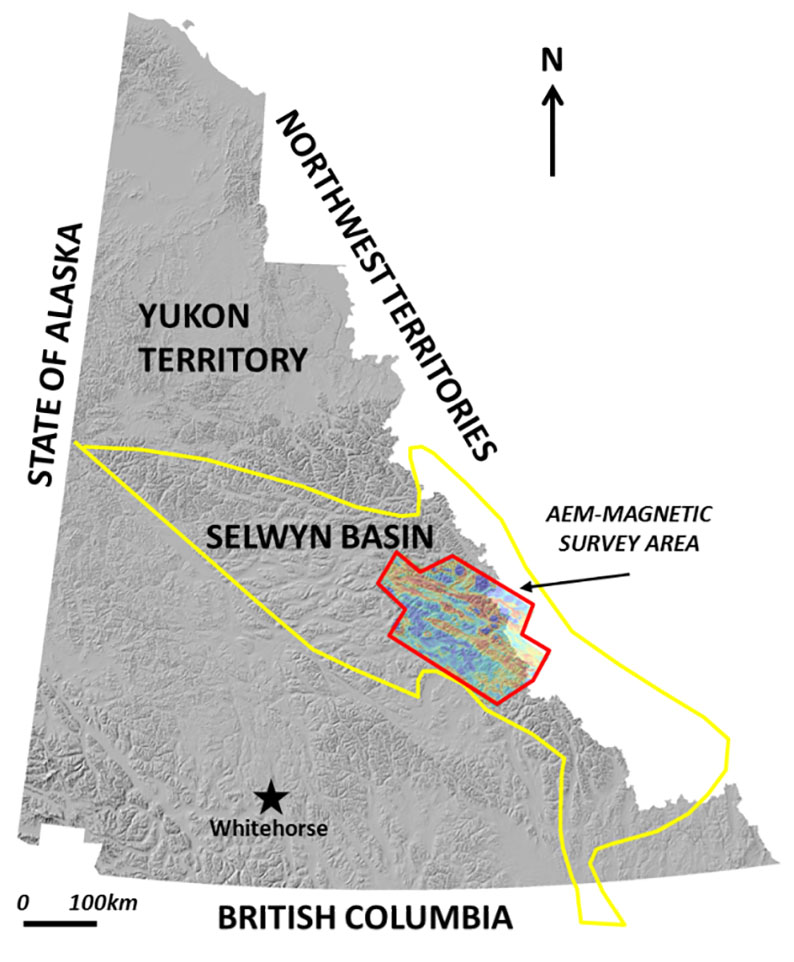 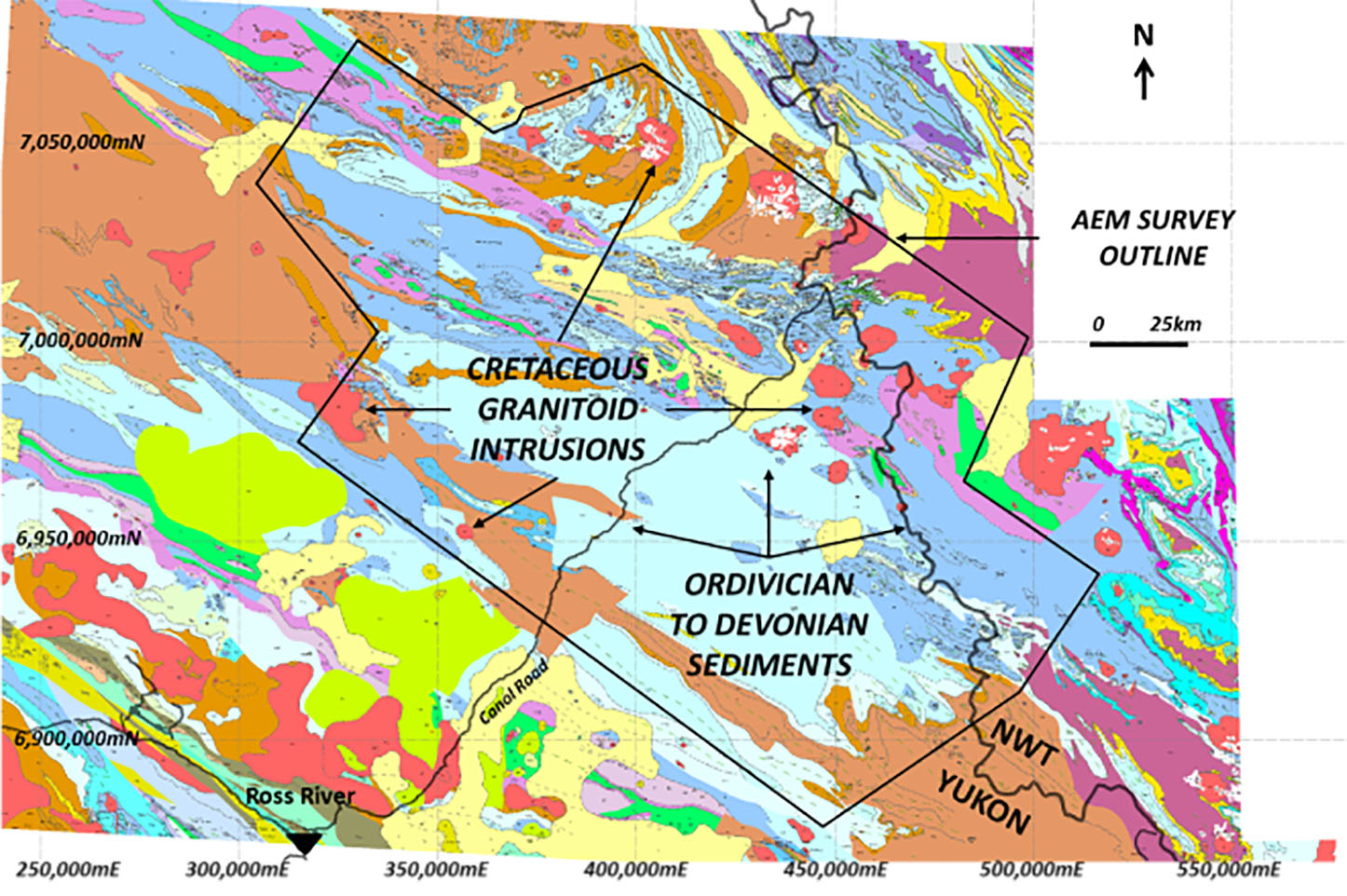 The Selwyn Basin total magnetic intensity (TMI) image in figure 3 shows the strong correlation between prominent magnetic anomalies and mapped Cretaceous granitoid intrusions; which, in spite of their low magnetic susceptibility, cause magnetic hornfels in surrounding rocks from related contact metamorphic pyrrhotite (Moynihan, 2013). In fact, the known vein-breccia and skarn deposits are intrusion related and associated with magnetic highs (Carne et al., 2013; Witherly, 2014). However, the SEDEX deposits in Selwyn Basin lack prominent magnetic signatures, due to the absence of ferromagnetic sulphides (Goodfellow, 2007) and, as shown in figure 3, the regional magnetic results also appear to contain less information on lithology and structure, due to lack of contrasts from low magnetic susceptibilities of the shale, chert and limestone host sedimentary rocks (Legault et al., 2014). 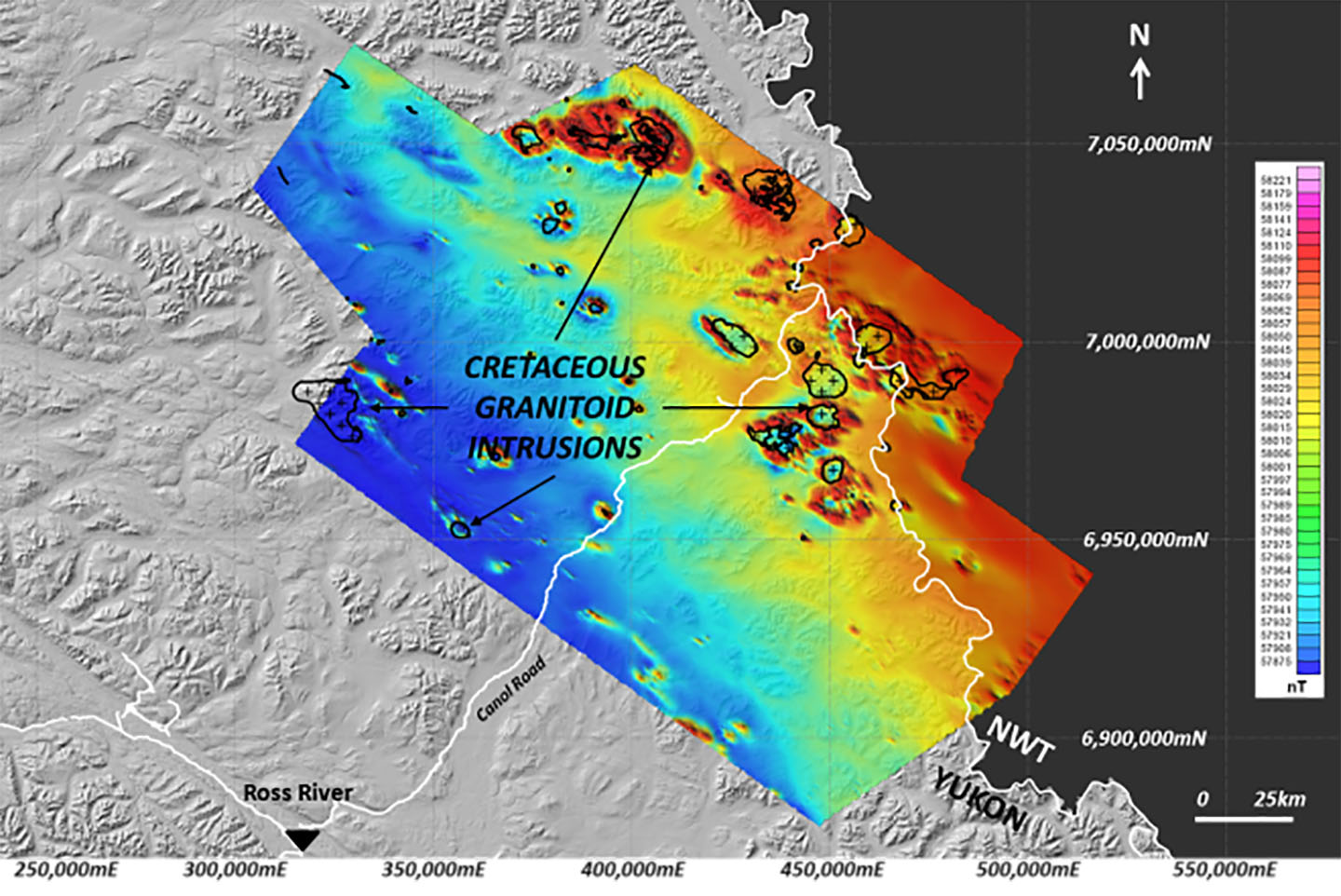 The ZTEM apparent conductivity image in figure 3 was obtained by applying the VTEM transform of Becken and Pedersen (2003) to the In-phase tipper data, as shown in Sattel et al. (2010). Comparing this image to the TMI in figure 3 reveals prominent circular resistivity highs (blue) and surrounding these are conductivity highs associated with igneous intrusions and the related magnetic and po- rich metamorphic aureoles. Figure 5 reveals similar good correlation between ZTEM conductive horizons and the locations of mapped faults in the district, which were not revealed in the previous magnetic results. 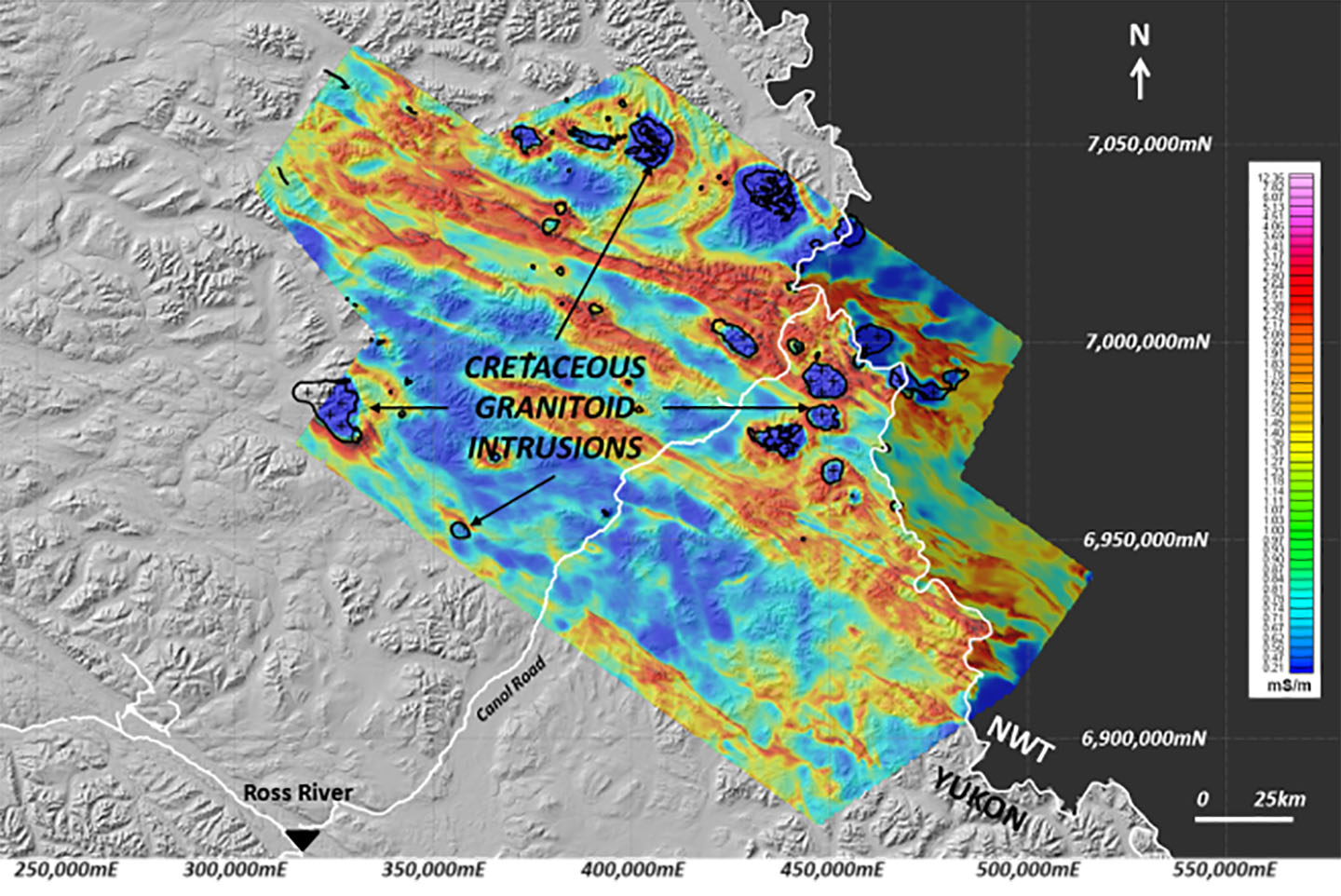 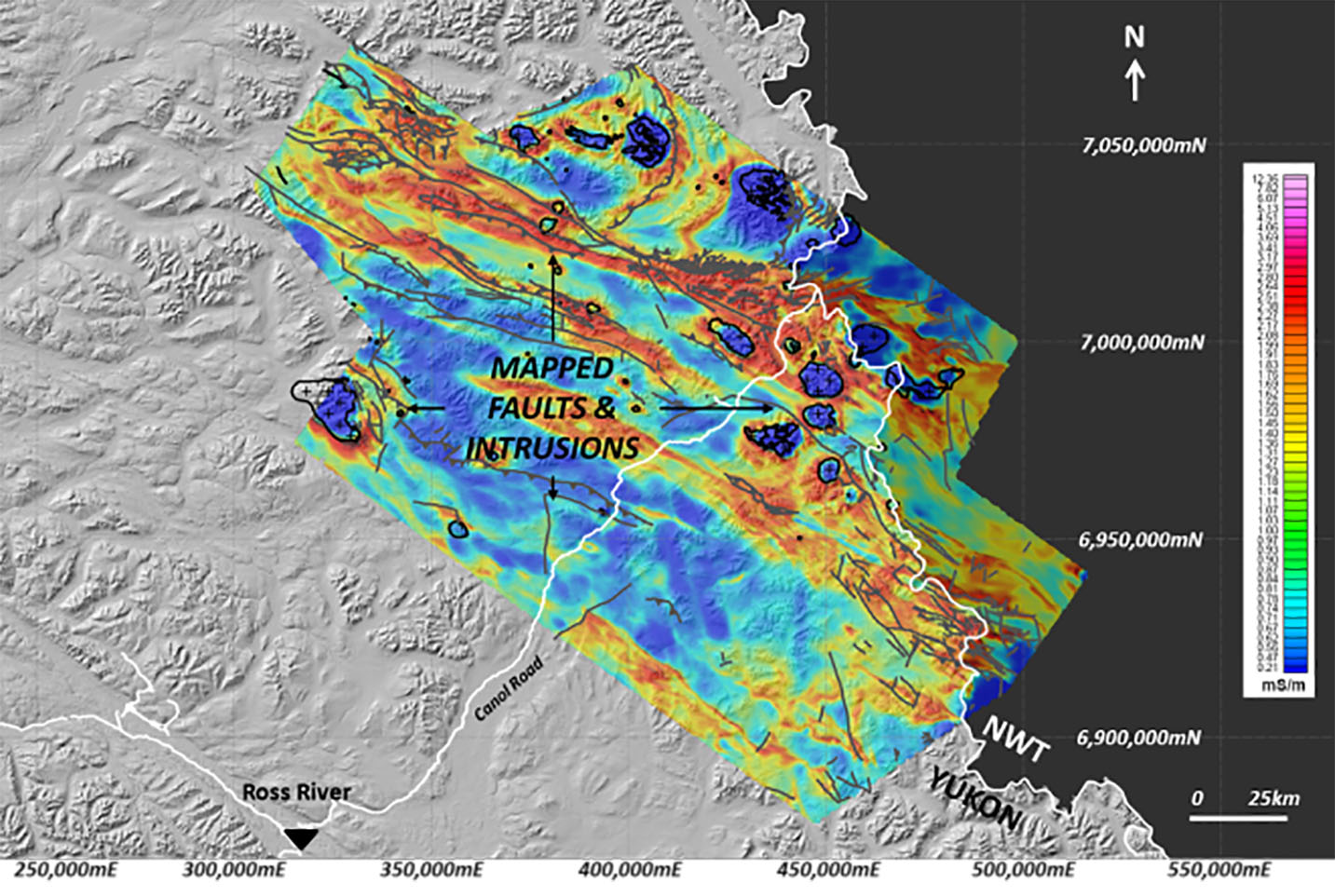 More significantly, outlines drawn around the main ZTEM apparent conductive horizons in figure 6 suggest the existence of major NW-SE trends within the Selwyn Basin that, at first, do not appear to be related to bedrock geology (see Fig. 2). However, upon further analysis, by superimposing the location of known mineral occurrences, prospects and deposits (see Fig. 7) it is revealed that these mineralized zones are clearly aligned along these major AEM conductive trends – none of which are apparent or visible in the magnetic results. Areas along strike of these conductive trends clearly merit follow-up in this underexplored region.

Based on the EM skin depth of investigation estimates, these ZTEM signatures may relate to bedrock features ex- tending to depths of 1km or more and are therefore unlikely to be related to surficial overburden origins. If these are in fact related to deeper basement structures, the alignment of deposits are likened to the research of Arehart et al. (2013) who identify close similarities in the genesis between the Carlin-type gold deposits in Nevada and Yukon, inferred to be based on their alignment in the Rodinia supercontinent 700 Ma previous (see Fig. 8). Given the importance and recognition of aligned mineral trends in Nevada (see Fig. 9), the identification of similar possible AEM defined basement trends could also be significant guides to exploration in Yukon’s Selwyn Basin. 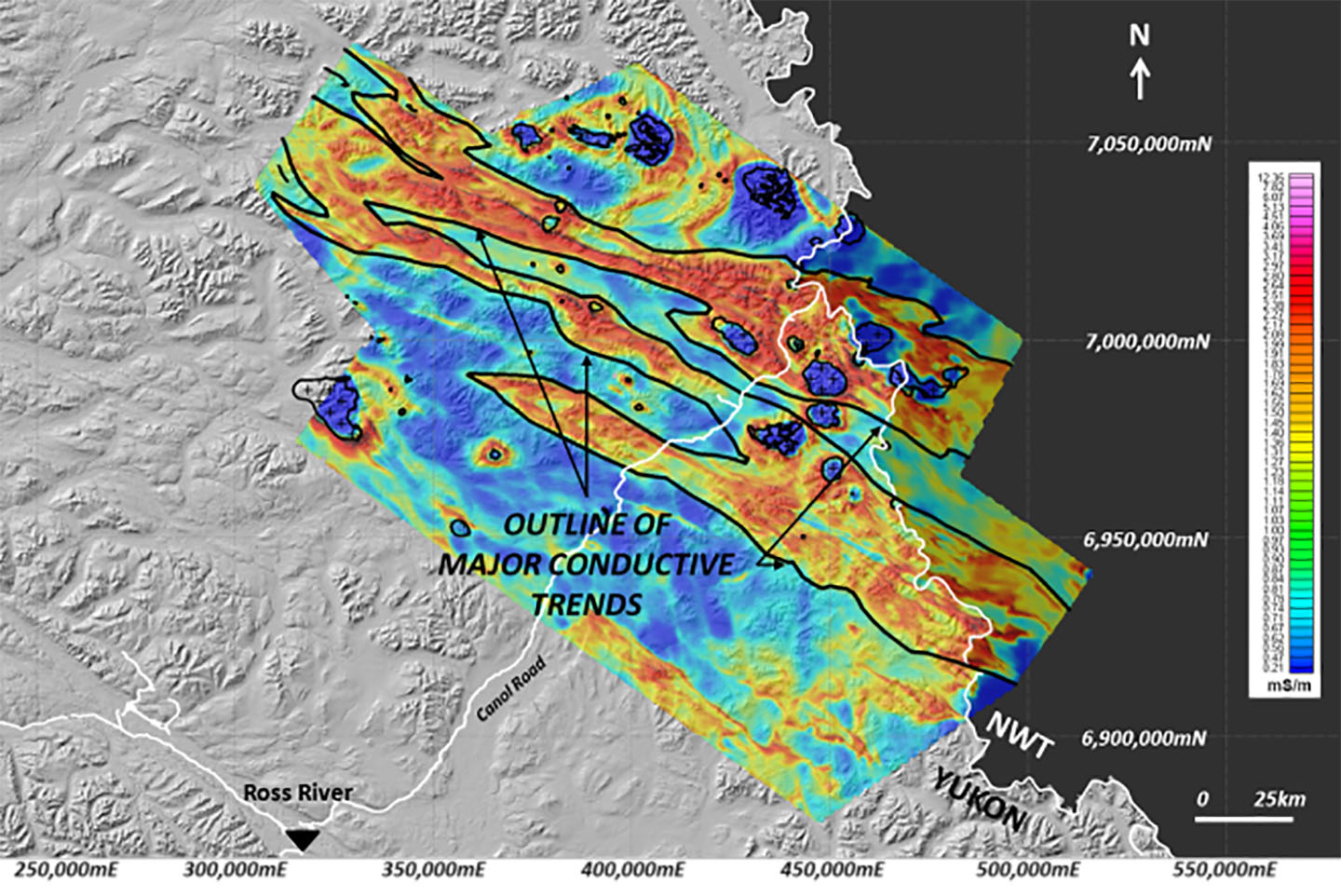 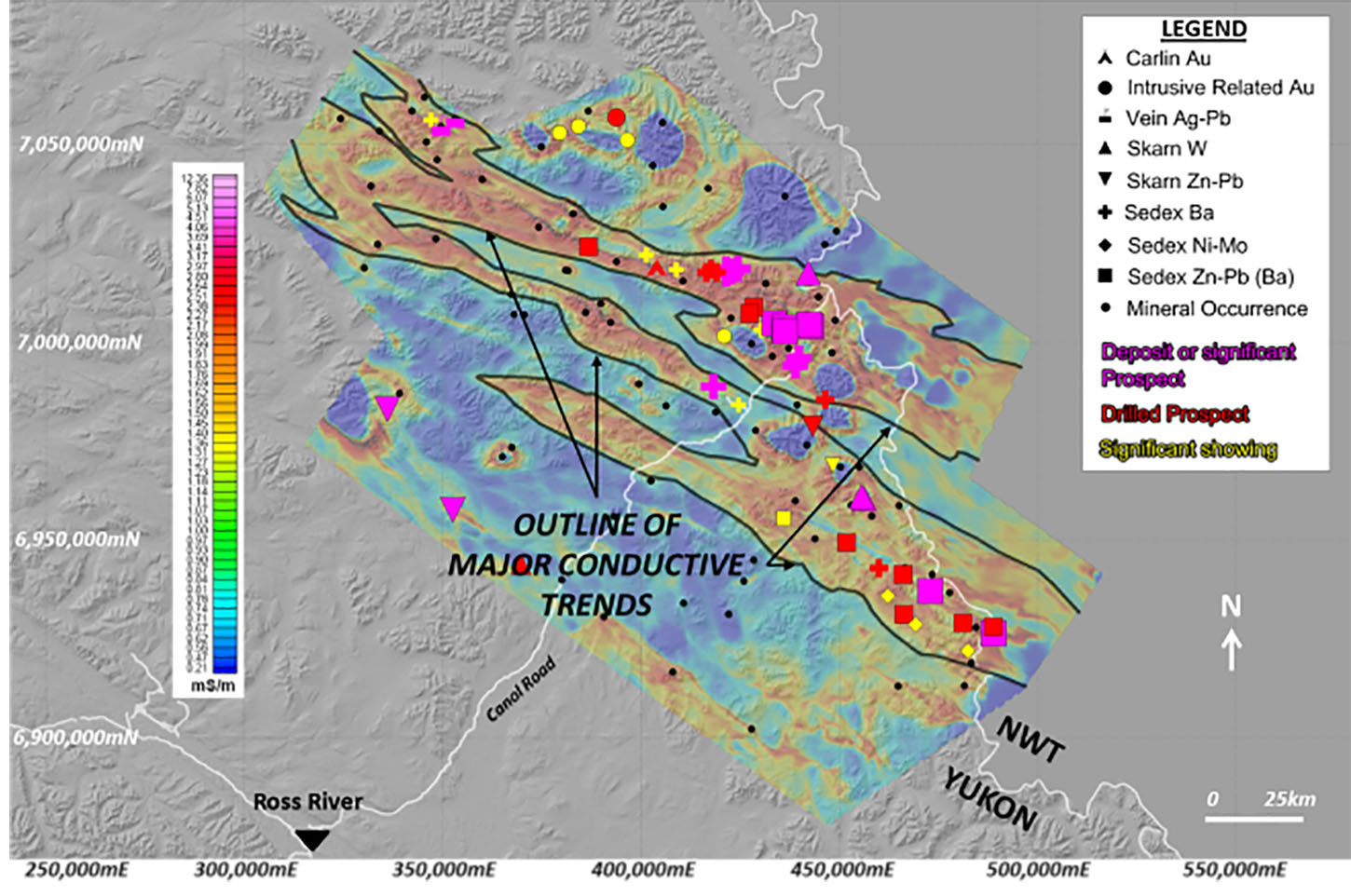 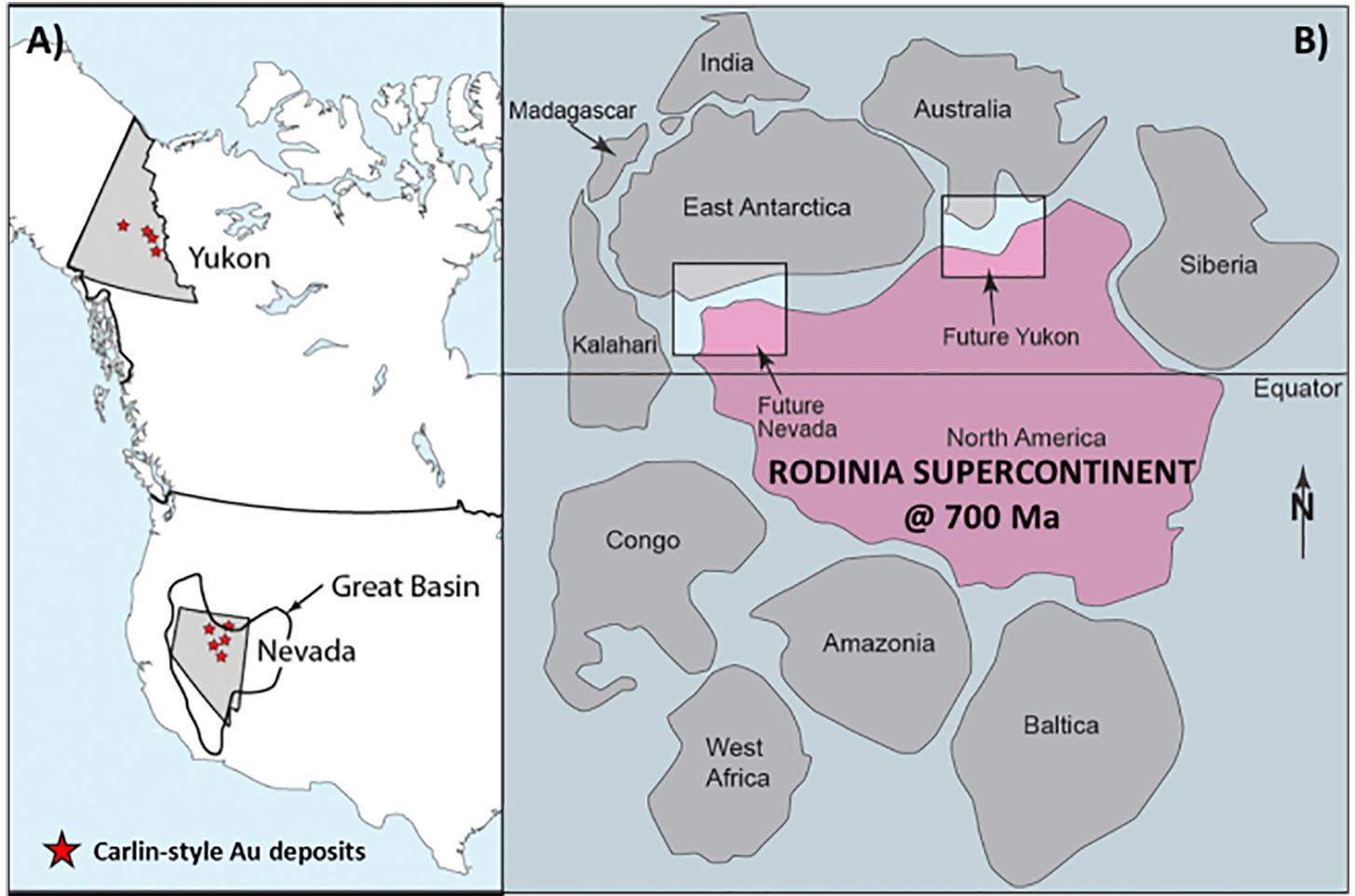 Figure 8: Schematic showing spacial relation of Yukon & Nevada and: A) Location of Carlin-style Au deposits, and B) Inferred location on Rodinia supercontinent (after Arehart et al., 2013). 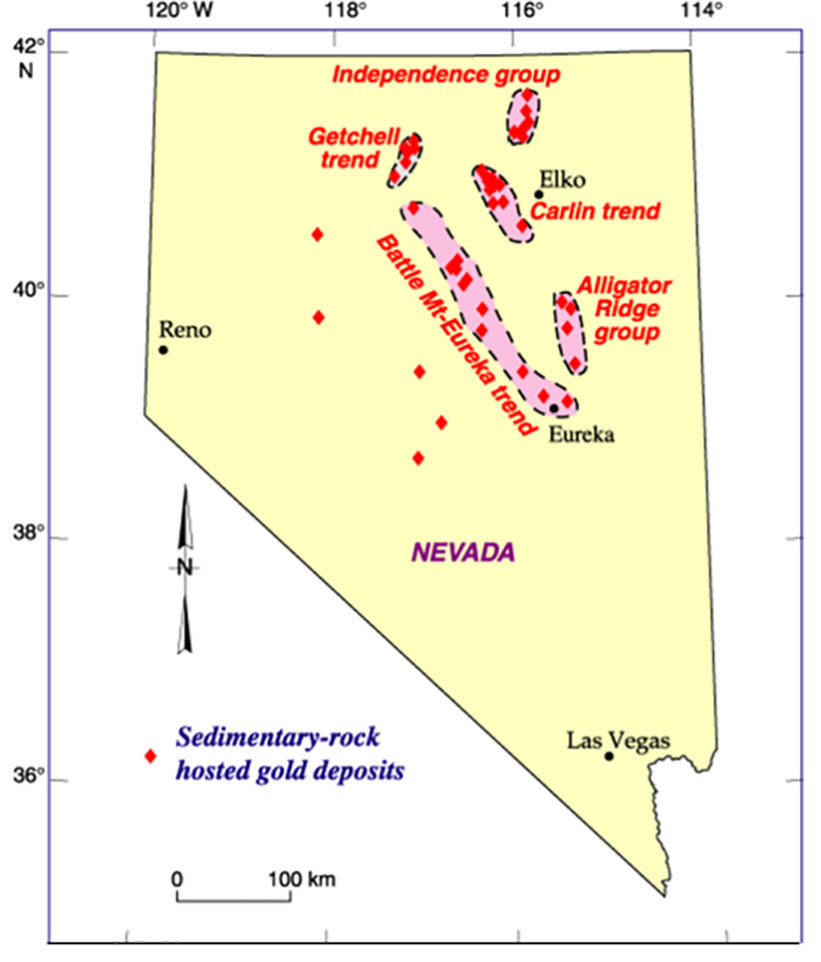 Analysis of a regional passive airborne EM and magnetic survey in Selwyn Basin from an explorer’s perspective have highlighted a strong correlation between regional conductive trends and the distribution of mineral occurrences in the region, which were not visible in the regional magnetics. That these potentially deep (>1km) AEM signatures represent possible basement structural controls also points to genetic similarities between Carlin-style gold deposits in Yukon and Nevada, where regional deposit trends are also well recognized. Similarities between zoned ZTEM signatures related to Cretaceous skarns in Selwyn Basin and porphyry copper deposits in Western Cordillera are also highlighted. These underline the potential importance of ZTEM defined structural and alteration trends for future exploration in Selwyn Basin and similar applications of deep penetrating AEM in other geologic environments around the world. 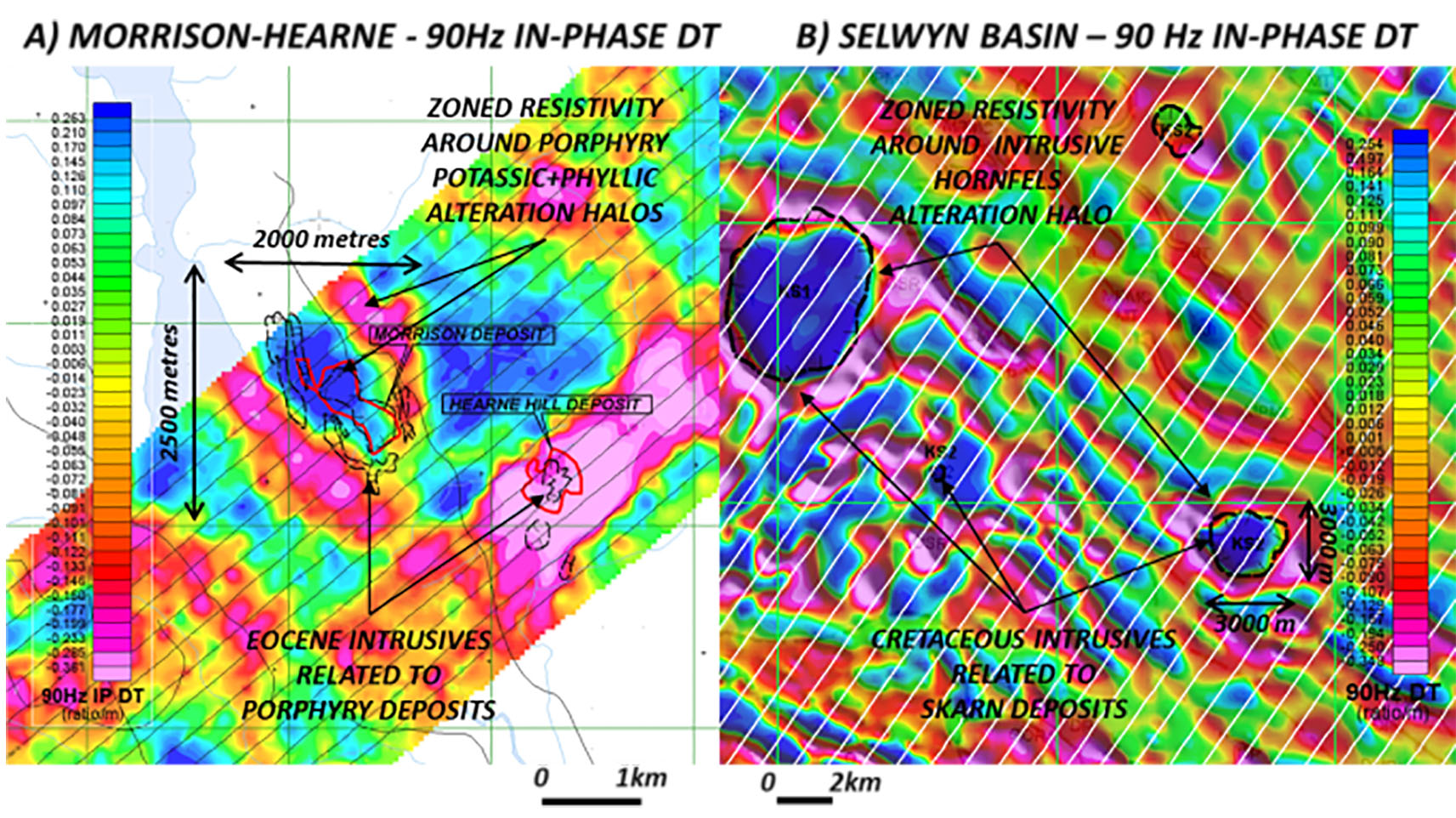 We are grateful to the Yukon Geological Survey and Ken Witherly, Condor Consulting, for the YGS 2013 workshop.