We introduce an improved Airborne Inductively Induced Polarization (AIIP) mapping algorithm, which can extract with precision the three Cole-Cole parameters, i.e., low-frequency background apparent resistivity ρ0, Cole-Cole chargeability m and time-constant τ, while keeping the frequency factor c fixed. The derived Cole-Cole parameters (ρ0, m and τ) are related to physical properties. The interpretation of Cole-Cole parameters may be enhanced by considering the AIIP normalized chargeability m/ρ0 and the AIIP tau-scaled chargeability (TSC) m ⋅ τ. The former is analogous to the metal factor (MF). It responds well to most clays and is here given the label AIIP Clay Factor. The TSC is better suited for tracking relatively more chargeable materials with relatively longer Cole-Cole time-constants. The implications of AIIP normalized and tau-scaled chargeabilities for mineral exploration are demonstrated with cases from the Tli Kwi Cho kimberlite complex in Lac de Gras, NWT, Canada and the Cerro Quema high sulphidation epithermal gold deposits in Panama.

The extraction of the four Cole-Cole parameters (ρ0, m, τ and c) from VTEM data can be challenging, due to the non-unique nature of the inverse problem. The original AIIP mapping algorithm introduced by Kwan et al., 2015 is computationally very slow and lacks precision. An improved version of AIIP mapping based on Airbeo from CSIRO/AMIRA[1] (Raiche 1998) applies the Nelder-Mead simplex minimization (Nelder and Mead, 1965) in the 2D (m,τ) plane. At each test point (mi, τi), the optimal low-frequency background resistivity ρ0 is found by one-dimensional Golden Section minimization (Press et al., 2002).  The new AIIP mapping algorithm uses the Airbeo’s forward modeling kernel only. It can extract (ρ0, m, τ) parameters with precision while keeping c fixed at 0.7 for most cases.

AIIP tau-scaled chargeability m ⋅ τ and normalized chargeability m/ρ0
The Cole-Cole chargeability m is related to the quantity or volume percent/volume of chargeable material in the ground, and Cole-Cole time-constant τ is related to grain size; see Figure 1a taken from Pelton et al., 1978. The current range of AIIP tau sensitivity for VTEM systems operating with a base frequency of 25/30 Hz is 10-5 to 10-3 seconds. In the exploration for potentially economic sulphide mineralization, AIIP anomalies with relatively high sulphide content and fine-grained (in AIIP) are preferred as potential targets, as the region of interest highlighted by a red dashed ellipse. 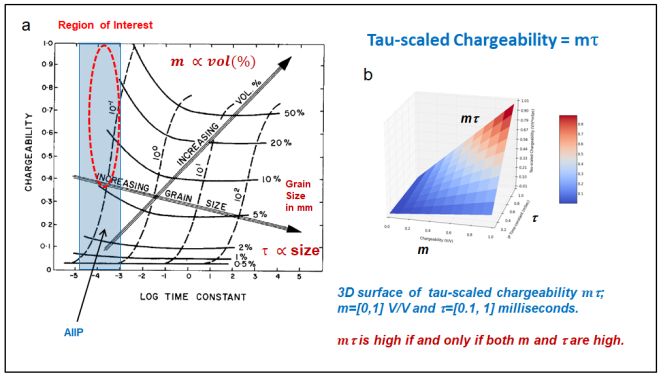 Figure 1: (a) Metallic sulphide content and grain size contours over the chargeability vs Cole-Cole time-constant (from Pelton et al., 1978), and (b) the m∙τ 3D surface plot showing high values occur only if both m and τ are high.

One way to select high chargeability m and high Cole-Cole time-constant τ anomalies is to use the product m ⋅ τ. As illustrated in Figure 1b, the surface m ⋅ τ is high if and only if both m and τ are high. The product m ⋅ τ can be considered as a good indicator of chargeable materials in the ground with relatively longer Cole-Cole time-constant or grain sizes in the order of 0.2 mm.

In frequency-domain galvanic IP the Metal Factor (MF) is defined as MF=2π×105FE/ρdc (Marshall and Madden, 1959), where FE=(ρdc-ρac)/ρac, and ρdc and ρac are apparent resistivities measured at DC and very high frequency (Slater and Lesmes, 2002). The frequency effect FE and the chargeability m are closely related (Slater and Lesmes, 2002, equations 11 and 12). Consequently, AIIP CF is analogous to MF in spectral IP for clays.

The DO-27 and DO-18 are two well-known kimberlites in the Tli Kwi Cho (TKC) kimberlite complex, located about 360 kilometers NE of Yellowknife, Northwest Territories, Canada, in the Lac de Gras kimberlite cluster of the Archean Slave Craton, Jansen & Witherly, 2004 (Figure 2a). The kimberlites are located in the permafrost zone. The outline of the DO-27 and DO-18 is shown in Figure 2b. The magnetic signatures from the TKC kimberlites are easily identifiable (Figure 2c). DO-27 is coincident with a shallow-lake, while DO-18 is exposed (Figure 2d). 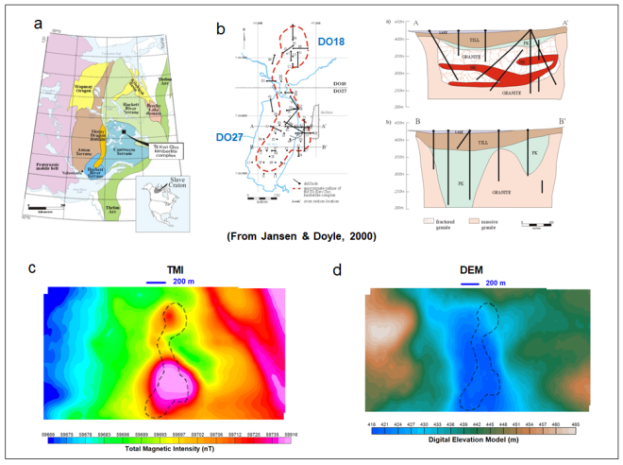 Figure 2: (a) The location of TKC complex in the Archean Slave Craton; (b) the outline of TKC complex and DO-27/DO-18 kimberlites, and two geological sections over DO-27 (from Jansen & Doyle, 2000); (c) and (d) The total magnetic intensity and digital elevation data acquired from the helicopter VTEM survey.

The improved AIIP mapping is applied to the helicopter VTEM data over the two pipes. The Z-component dB/dt voltage data in off-time windows from 0.12 milliseconds to 6.9 milliseconds are used. Cole-Cole parameters (ρ0, m, τ) are derived using a fixed frequency factor c of 0.7.

The AIIP CF data in (mV/V*S/m) and TSC data in (V/V*Milliseconds) are shown side by side in Figure 3. They look quite similar (Figure 3c). The distribution pattern of both seems to be spatially associated with the TKC kimberlite complex, and they almost match perfectly with DO-27, strongly suggesting that the AIIP effects over the TKC kimberlites are related to clay. However, the electrical properties of DO-18 and DO-27 are different, as the former is quite resistive and the latter relatively conductive (Figure 3b). Kang et al. 2017 suggest that the AIIP source may be a frozen ice/clay mixture (highly resistive) at DO-18 and conductive clay for DO-27 and both show strong chargeable responses (Figure 3a). We agree. In the study of Drybones Bay kimberlite, NWT, Kaminsky & Viezzoli, 2017 concluded also that the clay in the lake sediments is the main source of AIIP effects. 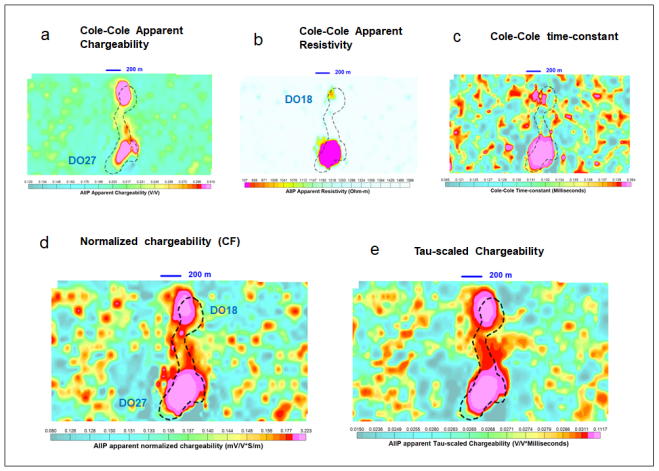 Figure 3: Cole-Cole (a) apparent chargeability, (b) apparent resistivity, (c) time-constant, (d) The normalized chargeability or Clay Factor (CF), and (e) the TSC over the TKC complex;

It is worth noting that the CF and TSC data being quite similar over the TKC complex. For non-metallic minerals at low frequencies (f≤1000 kHz), the imaginary part of the low-frequency complex conductivity can be considered a function of the surface conductivity, and the imaginary component is primarily indicative of the surface polarization, Slater & Lesmes, 2002. The Cole-Cole time-constant τ is proportional to the surface area of clay grains, i.e., τ≈kr2, where k is a constant and r is the radius of the chargeable grain (Revil, Florsch & Mao, 2015), or TSC=mτ≈mkr2. CF and TSC are related to the surface conductivity/polarization and specific surface area of clay, and hence their similarities.

A helicopter-borne VTEM, magnetic and gamma-ray spectrometric survey was carried out in March 2012 over the Cerro Quema high sulphidation epithermal gold deposits located in the Azuero Peninsula, Panama, Figure 4a. The survey was flown on behalf of Pershimco Resources Inc.

The study area consist of mainly sedimentary, volcaniclastic and extrusive volcanic rocks of the Rio Quema Formation, deposited in a forearc basin, overlying the Azuero Igneous Basement, Corral et al. 2011, Figure 4d. The Cerro Quema gold deposits (La Pava, Quemita and Quema) are hosted in the Upper Unit of the Rio Quema Formation, an east to west trending belt of porphyritic, pyroclastic flows, and lavas of dacite and andesite composition. The Rio Joaquin Fault is located to the south of the deposits. The deposits are located in elevated grounds, Figure 4b. 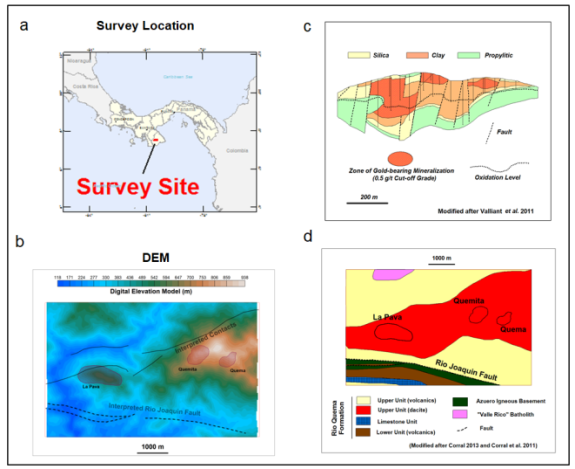 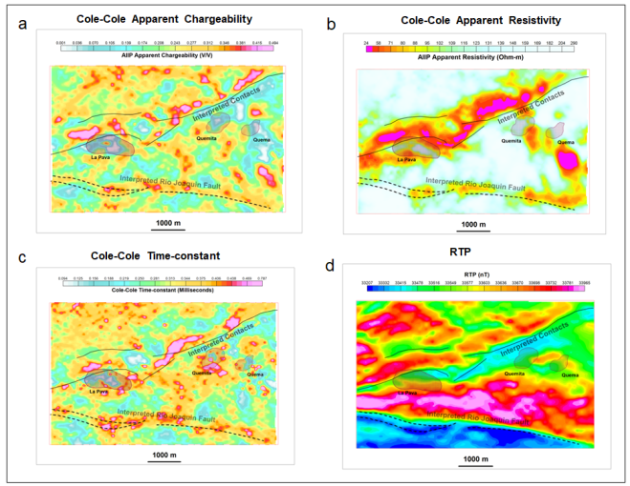 The AIIP CF data are shown in Figure 6a, side by side with the TSC data in Figure 6b. The CF data maps the clay alterations. In Cerro Quema, we see clear separation between the CF and the TSC. Most of the CF highs are located in the low lying areas north of the interpreted contact, south of the Rio Joaquin Fault, and the southern base of the mountain hosting the Quemita and Quema deposits. Most of the TSC highs are located along the interpreted contacts north of the Cerro Quema deposits, along the Rio Joaquin Fault and in the halos surrounding the La Pava and south of the Quemita. In this case study, the TSC data better reflects the disseminated and fine-grained pyrite alteration halos. The semi-circular halos could potentially be used an exploration vectors for high sulphidation epithermal gold mineralization.

Figure 6: A clear divergence is seen between (a) the CF data and (b) the TSC data from Cerro Quema. 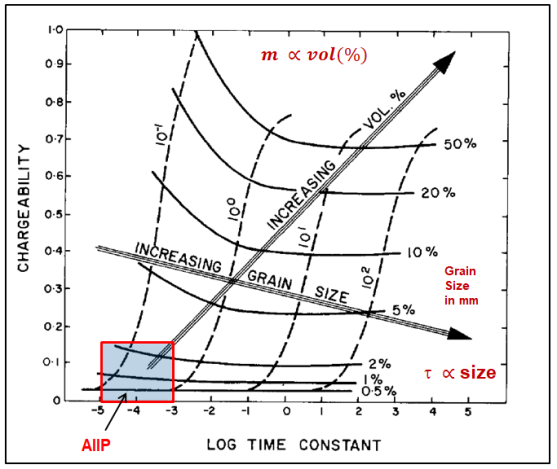 Many Canadian Archean lode gold deposits in glaciated terrains are chargeability and resistivity highs. Therefore the mρ0 and ρ0 maps could potentially be used for targeting these kinds of mineralization.

Many Archean lode gold deposits and most disseminated sulphide ores are considered ‘fine-grained’ in ground IP, in contrast to coarse grained stringer to massive sulphides. They show high resistivities and short time constants.

For potential Archean lode gold mineralization with low sulphide concentration, low chargeability and variable Cole-Cole time-constant, as illustrated in Figure 7, the τρ0 and ρ0 maps could be potential targeting tools as well.

The AIIP resistivity and resistivity-associated maps should be interpreted in conjunction with magnetic maps, since many explorationists look for lode gold in areas of magnetite depletion, due to hydrothermal alteration.

We have found that the interpretation of the derived Cole-Cole parameters can be enhanced by the use of AIIP normalized chargeability (m/ρ0) and AIIP tau-scaled chargeability (TSC) m ⋅ τ . The former can be treated as an indicator of very fine-grained polarizable materials, such as clay, and is named the AIIP Clay Factor (CF). The AIIP TSC is considered to be a good indicator of relatively more chargeable fine-grained materials with relatively longer Cole-Cole time-constants or grain sizes in the range of 0.2 mm.

We would like to thank University of British Columbia for providing the helicopter VTEM data over the TKC kimberlite complex, Lac de Gras, NWT, and Pershimco Resources Inc. for permission to use the airborne geophysical survey data over the Cerro Quema gold deposits, Panama. Finally, Geotech is thanked for permission to publish the AIIP mapping results.