VTEM helicopter time-domain EM survey results over the Brandon Channel and Assiniboine Delta aquifers, near Brandon, Manitoba, have been studied using unconstrained layered earth modeling. The resistive sand and gravel layers are distinguished from the more conductive shale basement and reveal localized thickening from blind gravel channels cut into its floor. They further distinguish a lower aquifer separated by a conductive clay layer from shallow sands of the Assiniboine Alluvial aquifer and the Assiniboine Delta Aquifer. The Brandon Channel aquifer is delineated, to the northwest and east of the city where it splits into a main south channel and smaller north channel. The western extent of Assiniboine Alluvial aquifer is defined and evidence for the Pierson Valley aquifer extending west from Brandon is also indicated.

Buried valley aquifers are important sources of groundwater supply in the Prairie Provinces of Canada, consisting of permeable sand and gravel deposits in eroded bedrock valleys. In Manitoba buried valley aquifers have been difficult to define because they are often partially eroded, have complex lithology and are hidden amongst other shallow sand and gravel aquifers within thick glacial overburden.

Recent investigations of the Spiritwood Valley aquifer, which extends into southern Manitoba from North Dakota, by the Geological Survey of Canada and other workers, have demonstrated the value of helicopter time domain electromagnetic (HTEM) surveys in aquifer mapping and characterization (Oldenborger, 2010a; 2010b; Oldenborger et al., 2010; 2011; 2012; 2013; Sapia et al., 2012; 2013; 2014; 2015; Legault et al., 2012; 2013; Prikhodko et al., 2013). In February, 2013, the Department Manitoba Conservation and Water Stewardship commissioned a similar HTEM survey of a region surrounding the city of Brandon to map the Brandon Channel aquifer (Fiset et al., 2013). While the Brandon Channel aquifer was known to exist in the area where it is an important source of water for local industries, the boundaries of the aquifer, its complex internal structure and water bearing zones remained enigmatic.

The helicopter time-domain EM survey used in Brandon was the Full Waveform VTEM system (Legault et al., 2012; 2013) and horizontal magnetic gradiometer. The block was flown in a southwest to northeast direction (N 15° E azimuth) traverse line spacing of 400 metres; tie lines were flown perpendicular to the traverse lines at a spacing of 5000 metres (Figure 1). As shown the survey extended along the Assiniboine river valley with survey lines clipped to avoid populated areas of the city of Brandon to the west and the town of Shilo to the east. A total of 645 line-kilometres of geophysical data were acquired during the survey over an area of 244 square kilometres. Figure 2 presents the VTEM EM decay time-constant (TAU) that highlights conductivity highs (warm colours, slow decays) and conductivity lows (cool colours, fast decays) that relate to the subsurface geology. 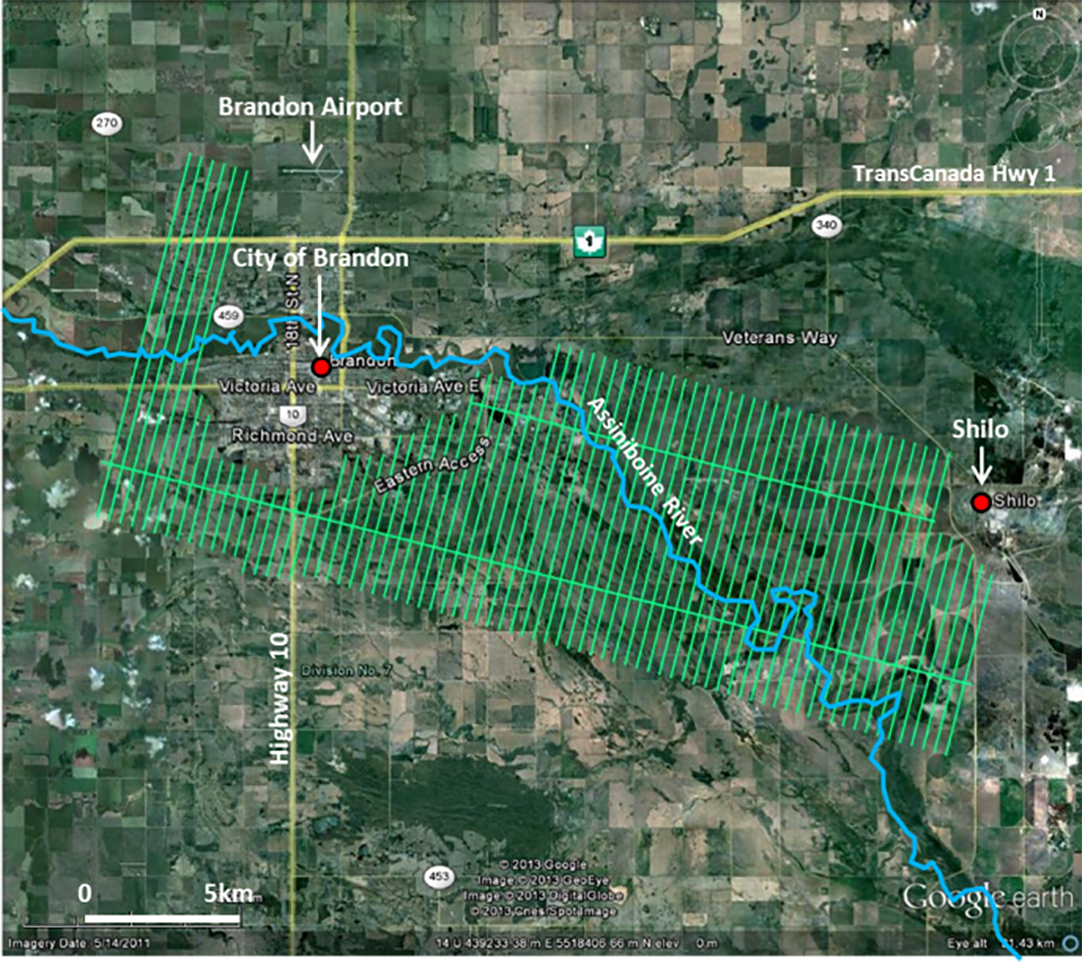 Highlighted are resistive lineaments that are interpreted to represent buried gravel valleys that have been eroded into the more conductive basement shale bedrock, forming channels filled with more resistive coarse-grained material. The Brandon Channel aquifer is observed to be comprised of two valleys that may or may not be connected to each other, and to the Pierson Valley aquifer to the southwest. 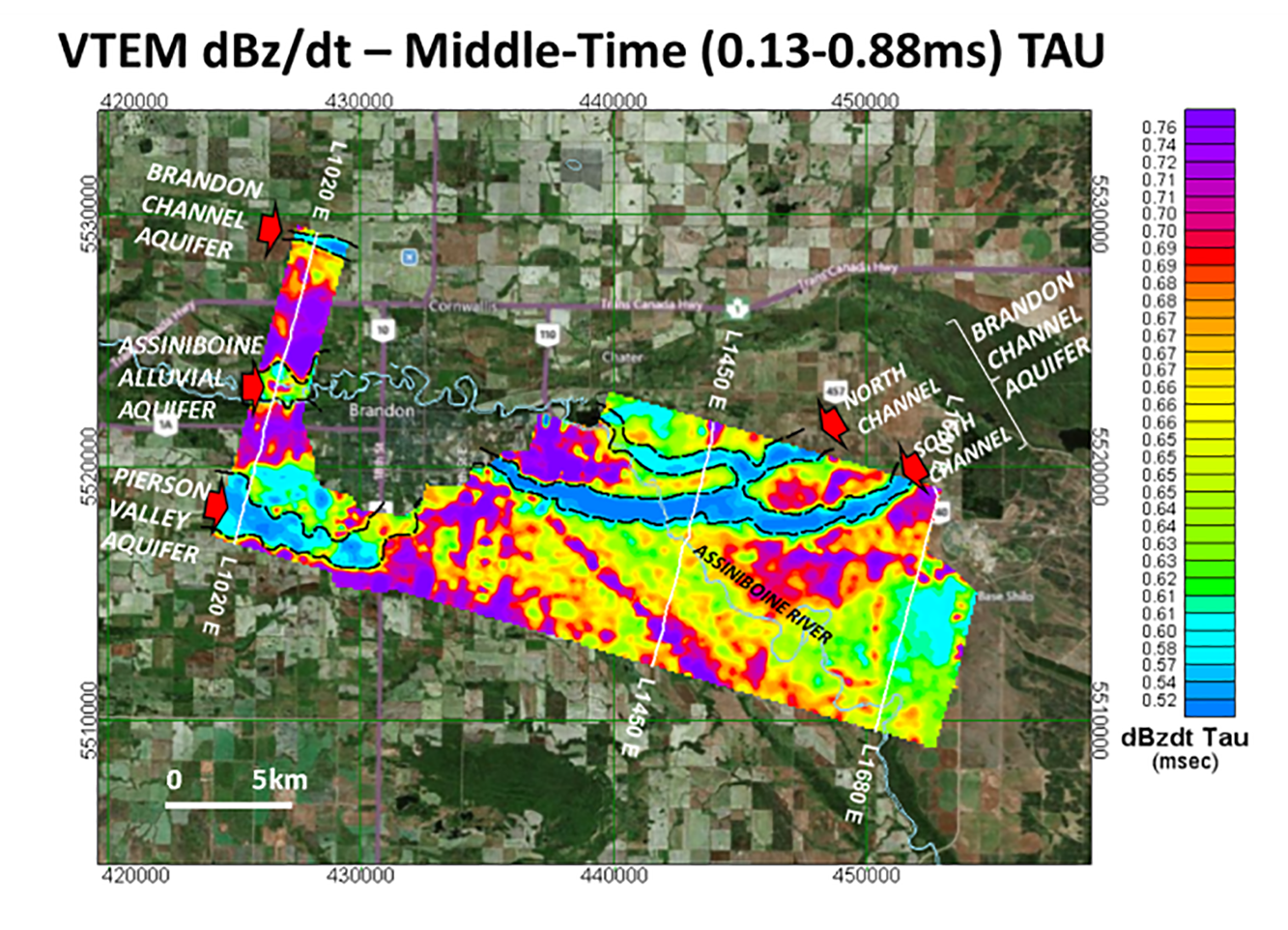 The VTEM dBz/dt EM data were converted to their equivalent cross-sectional resistivity-depth distribution using the Airbeo one-dimensional (1D) layered-earth inversion (LEI) program by CSIRO (Chen and Raiche, 1998) that models the EM decay response using discrete layer thicknesses and resistivities. The EM soundings were decimated to ~12m intervals. All the off-time decay channels from 0.031 to 8.083 msec. were fit to the modelled response from 4-layer model. No constraints on layer-resistivities or thicknesses were applied and the initial 4-layer starting model was the same for all soundings. Pseudo-2D resistivity sections were then constructed for all 76 lines using the recovered 1D resistivity models. Figure 3 presents three representative LEI cross-sections from the western (L1020), central (L1450) and eastern (L1680) survey areas.

The sections in Figure 3 reveal a conductive basement (<10 ohm-m) that is distinguished from the more resistive (>10-500 Ω-m) overburden. The overburden sequence is observed to be from 30 to 100 m thick and appears to be composed of at least three layers: 1) The resistive (>100 Ω-m) surficial layer that is less than 50 m thick is interpreted as glacial-fluvial sands and gravels that are observed across the survey area (Matile and Keller, 2004). 2) The intermediate thin conductive layer (~10 Ω-m) approximately 10 to 30 m thick suggests silt- or clay-rich material, possibly a glacio-lacustrine clay-plain. 3) The lower resistive layer (>100 Ω-m) has variable thickness from <10m to >100m in accordance with bedrock topography and is interpreted as coarse-grained fill deposited in bedrock valleys. The interpreted sedimentary sequence corresponds to a hydrogeological model of deep buried valley aquifers separated from a surficial upper aquifer by an intermediate clay aquitard. 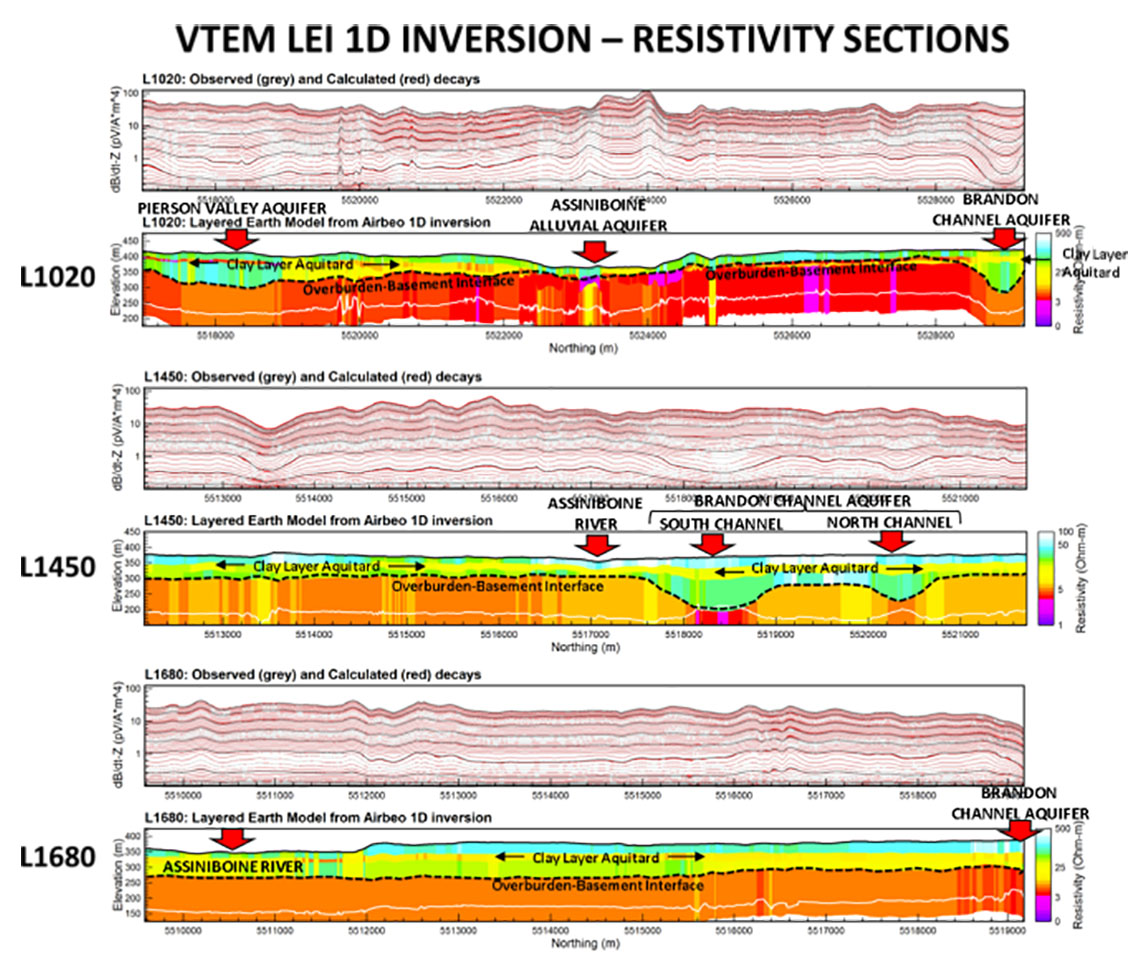 Figure 4 presents the bedrock topography over survey area estimated as the elevation of the contact with the bottom conductive layer in the 1D inversion results. The Brandon Channel aquifer is identified in the northwest and observed to split into two channels (north & south) in the main survey area. The Assiniboine Alluvial aquifer is only visible to the west of the survey area and there is evidence of the Pierson Valley aquifer which extends west of Brandon. 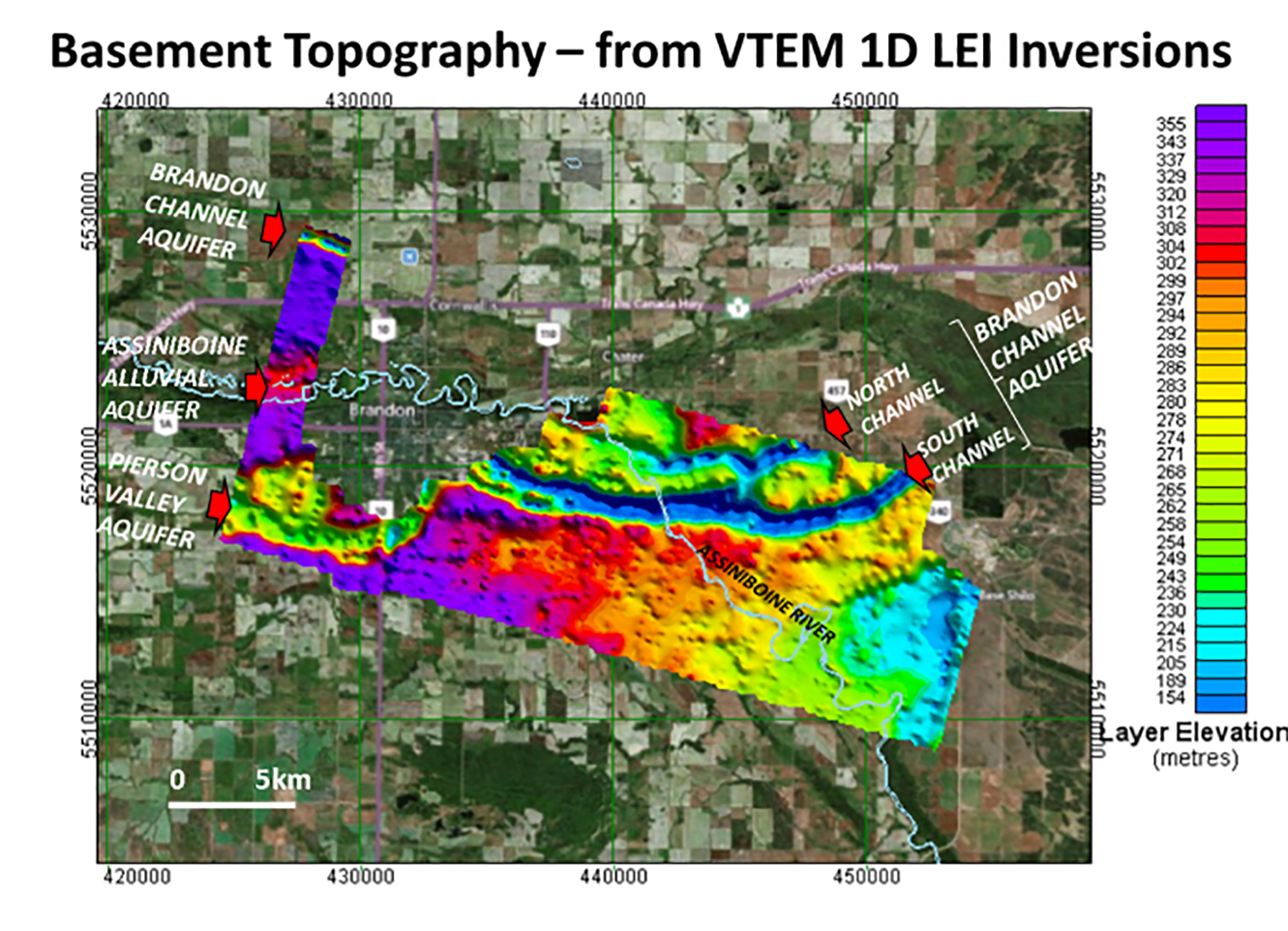 The authors wish to thank the Manitoba Conservation and Water Stewardship Department, Government of Manitoba, for allowing us to show these results.

Sapia, V., Viezzoli, A., and Oldenborger, G.A., 2012, Investigating the role of constraints from seismic, resistivity and boreholes in the inversion of airborne EM data: Geoconvention 2012, Expanded Abstract, 3 p.