The Northern Empire mine property is in Beardmore in Ontario and was operated successfully by Newmont Mines (1934-1941), producing 149,053 ounces of gold from 425,866 tons with a recovery of 0.35 oz. in gold per ton. It is serviced with a shaft to 2,460 feet with development above and below a major flat diabase sill. The mine ceased mining operations in 1942.

The Mine itself has been re-evaluated for additional ore potential; in particular a parallel vein structure to the north of the mined Power Zone called the Contact Zone.

2007 and 2008 saw extensive drilling which has identified more than 25000 ounces of gold (43-101 compliant) reserves with the new Contact Zone as well as un-mined areas of the Power Zone. Two of significant intersections from the drilling are presented in the pictures below. 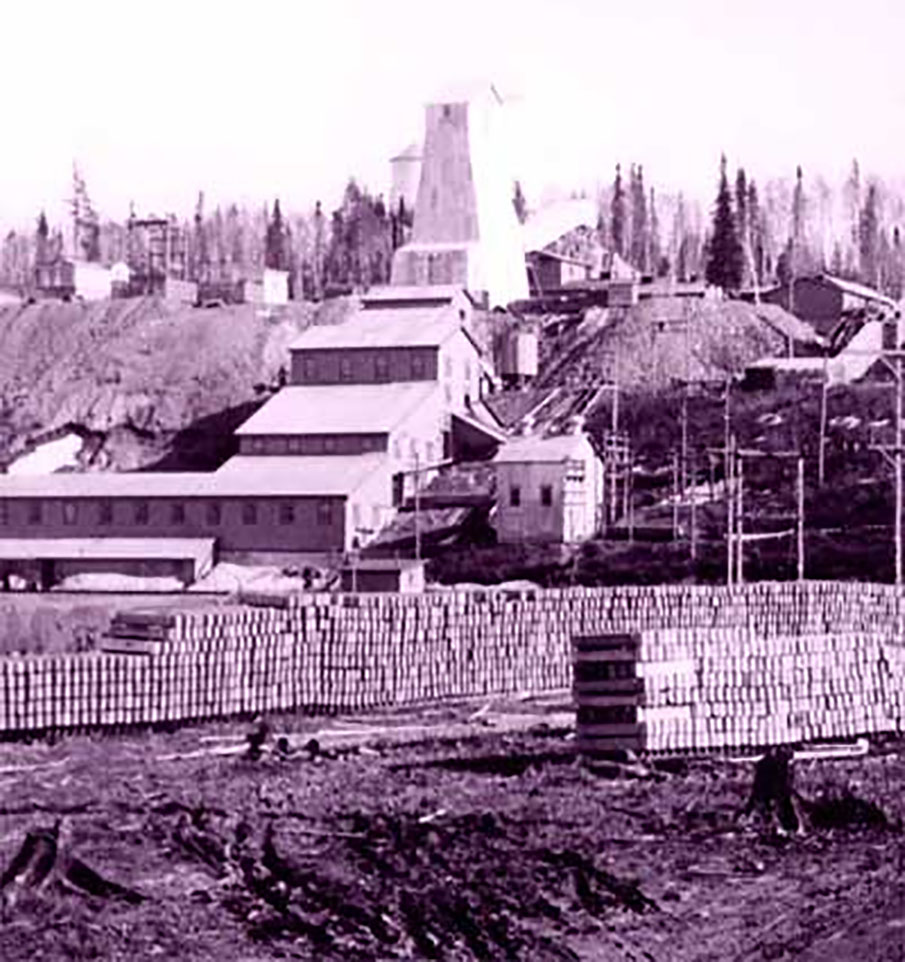 Figure 1: An image of the old mine site. 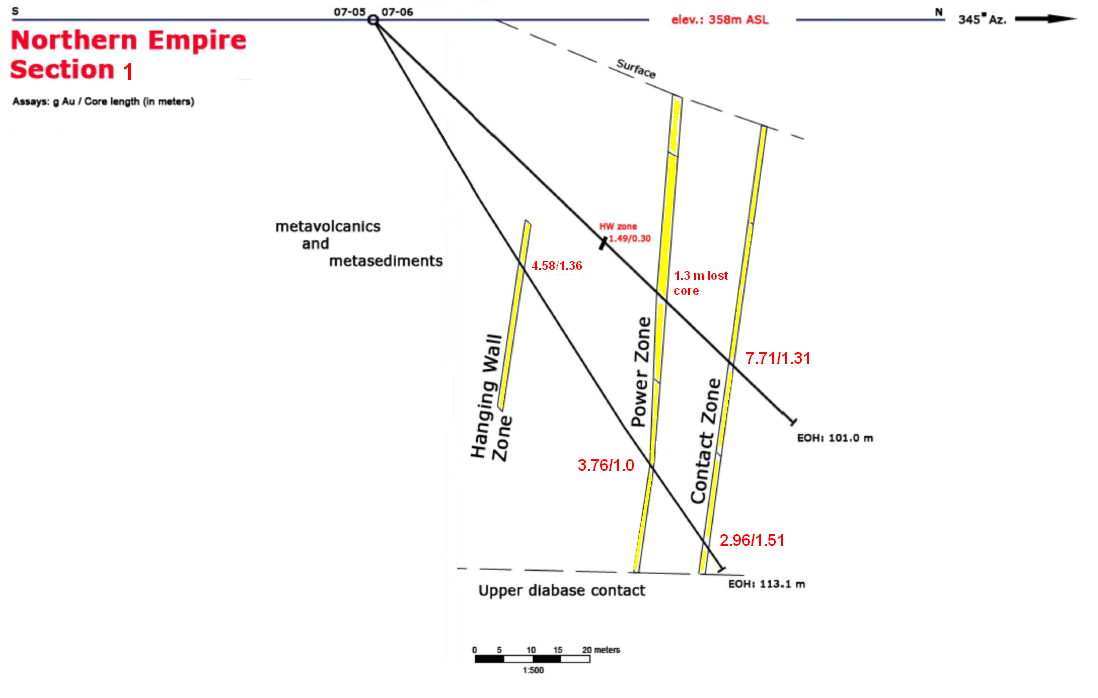 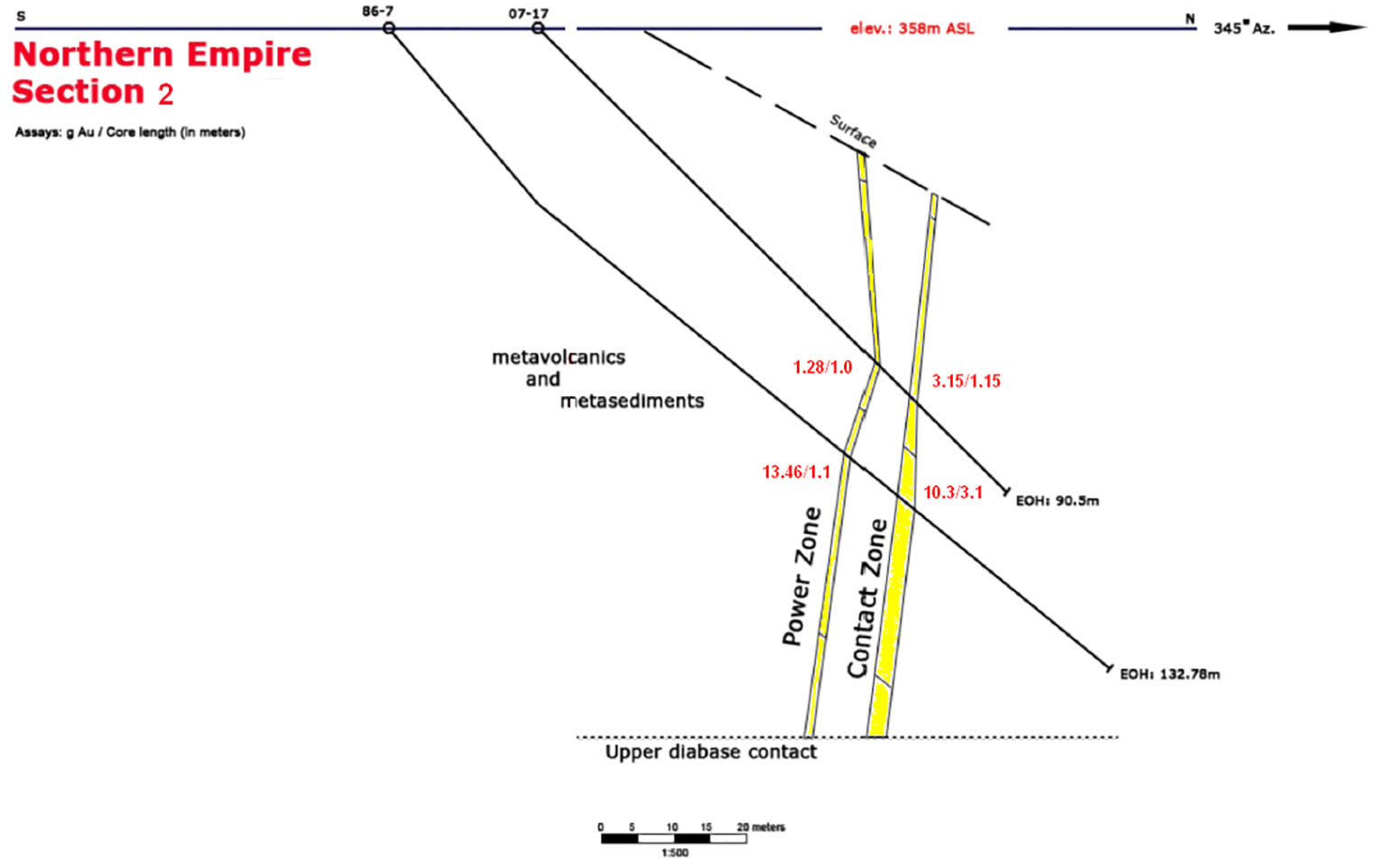 The big area in the region was flown with VTEM system in 2008. Some lines were flown over the Northern Empire mine property as seen in Figure 4. 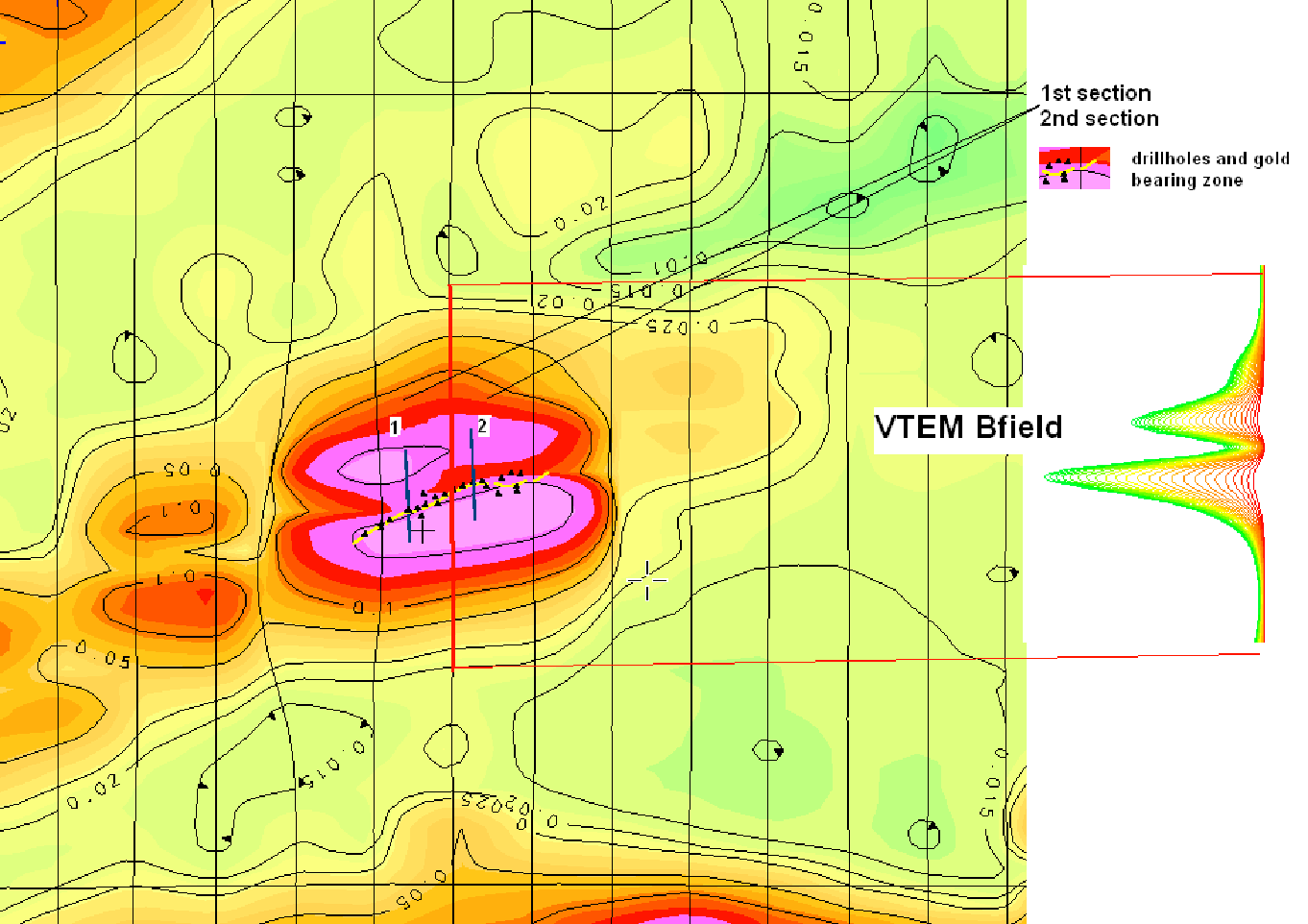 Figure 4: The VTEM data shows a conductive unit lying directly below the location of Northern Empire gold-bearing zone outlined on base of drilling. 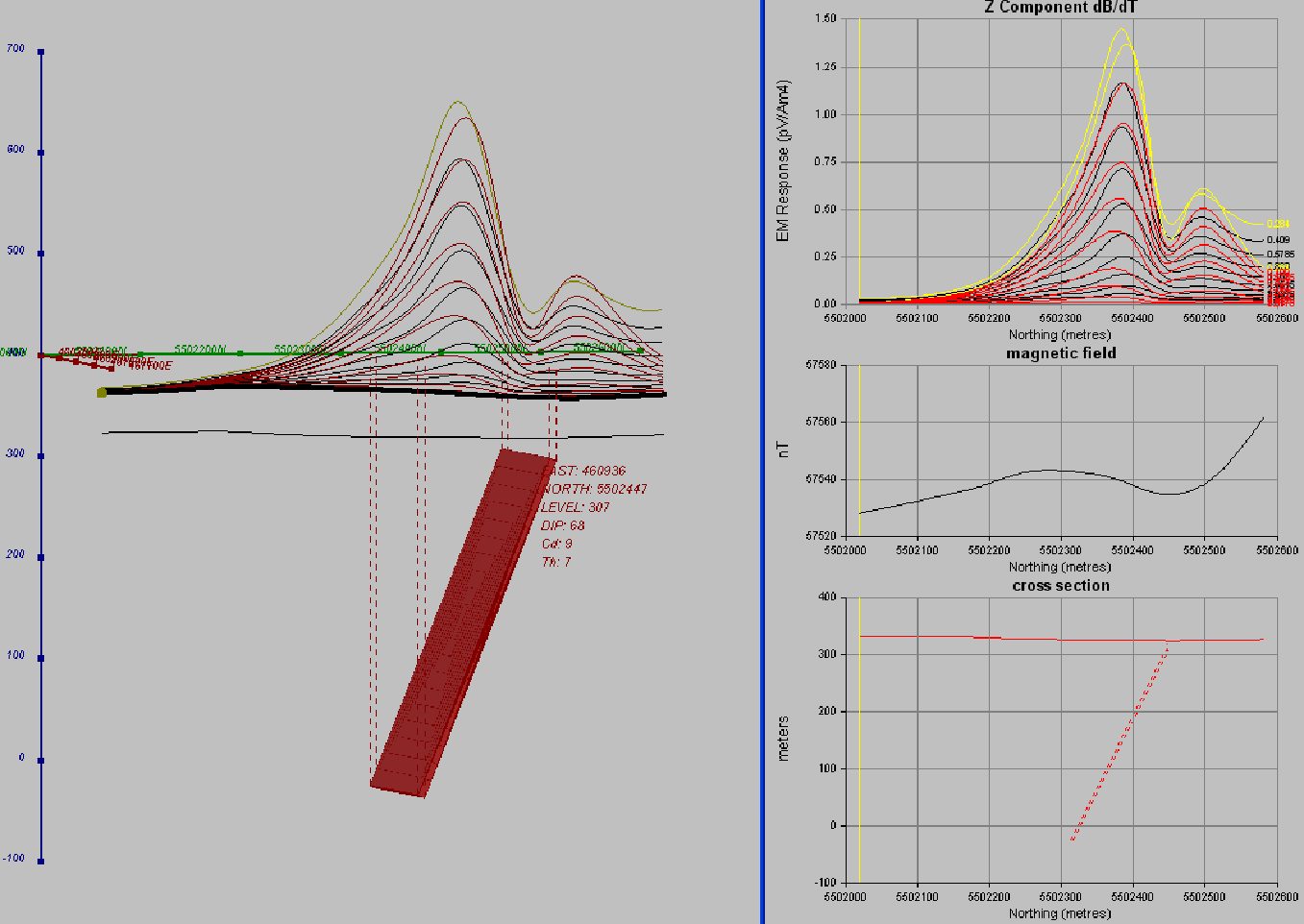 Figure 5: The modeling on base of VTEM data provides very reliable parameters for drilling.

Supplemental Geological Information About Type Of The Gold Deposits

Greenstone-hosted quartz–carbonate vein gold mineralization structurally is controlled by faults, shear zones and associated with large scale iron-carbonate alteration trends commonly distributed along major fault zones and subsidiary structures . This type of gold deposit is characterized by moderately to steeply dipping, laminated fault-fill quartz-carbonate veins which typically infill the central part of, and are subparallel to slightly oblique to, the host structures (Figure 6). 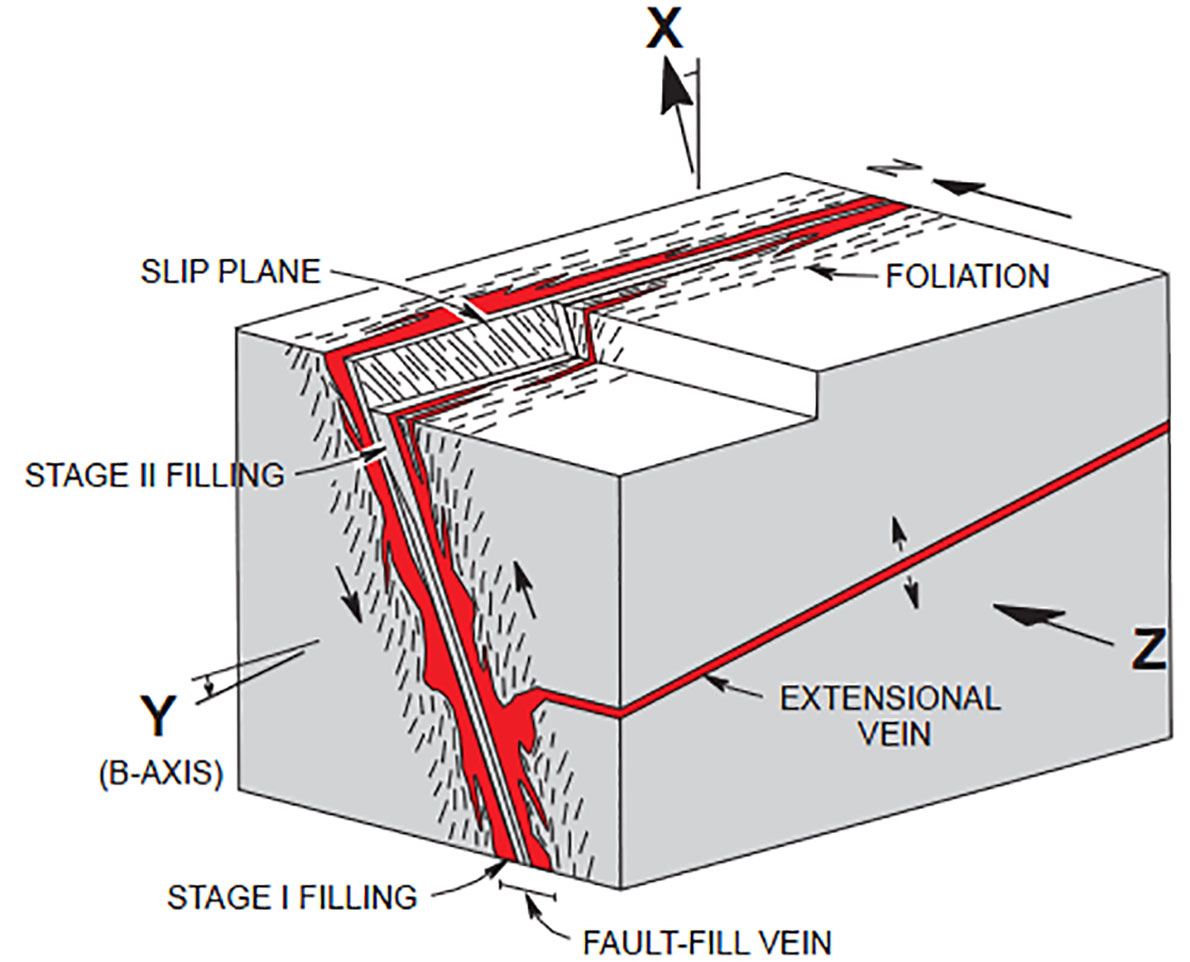 Figure 6: Schematic diagram illustrating the geometric relationships between the structural element of veins and shear zones and the depositscale strain axes (from Robert, 1990).

Typically, the alteration haloes are zoned and characterized – in rocks at green schist facies – by iron-carbonatization and sericitization, with sulphidation of the immediate vein selvages (mainly pyrite, arsenopyrite). Gold is mainly confined to the quartz-carbonate vein networks but may also be present in significant amounts within iron-rich sulphidized wall-rock selvages or within silicified and arsenopyrite-rich replacement zones.