Recently the idea of using dual transmitted waveform systems for airborne EM time-domain surveys has gained popularity with the opinion that such systems could provide the best of both worlds – strong dipole moment for deep penetration and early time gates for better definition of near surface features. Although at first glance the idea of dual waveform might seem to be attractive, more detailed analysis shows that the dual waveform has serious disadvantages, especially for mining applications where conductors are discrete and highly conductive in many cases. The single waveform system delivers better definition for the discrete conductors, the situation typical for mining applications.

Up until recently, airborne time-domain EM platforms have typically used a single on-off pulse waveform, using a variety of pulse shapes (sinusoidal, box-car, triangular, etc.) depending on the system and application, including near surface layered geology problems. However, more recently the concept of dual waveform systems for airborne EM time-domain surveys has been proposed (Auken et al., 2009; Chen et al., 2013). The reason for this technical solution is to reduce the system response influence on the signal received in the earliest stages after transmitter current off with the expectation that such systems can provide the best of both worlds: a) high dipole moment from comparatively long pulse for deep penetration and b) early time gates from short pulse for better definition of near surface features. Indeed, although initially designed and proposed for hydrogeologic applications, where lateral changes are not significant, the dual waveform concept has since been extended into mineral exploration (Sorensen, et al., 2013).

Although at the first glance the idea of dual waveform might seem optimal, more detailed analysis shows that the dual waveform concept has certain disadvantages, especially for mining applications where conductors are often discrete and highly conductive. In particular, with regards to gaps in electromagnetic and magnetic coverage that result from the dual waveform sequential sampling technique. As another example, dual waveform systems that transmit during the same duty cycle, rather than sequentially, can compromise the latest time gates that are critical for depth of investigation and conductor characterization. In comparison, more traditional/conventional single pulse systems sample the earth continuously and uniformly using the same pulse shape, as well as into latest possible times, thus delivering better definition of discrete conductors, the situation most typical for mineral exploration.

The first case is for the dual waveform system whereby the high moment (HM) data, obtained using a longer pulse at high amperage, are collected separately, or sequentially, in a separate data interval from the low moment (LM) data, from a smaller, shorter transmitter pulse, as in Auken et al. (2009). In this case low moment data are collected over a time interval and high moment data are then collected over the following time interval. During these time-intervals the data are stacked in order to improve their statistical accuracy and then resampled to a regular sampling interval, typically 10 samples per second. This pattern is repeated over and over again, as shown schematically in Figure 1. 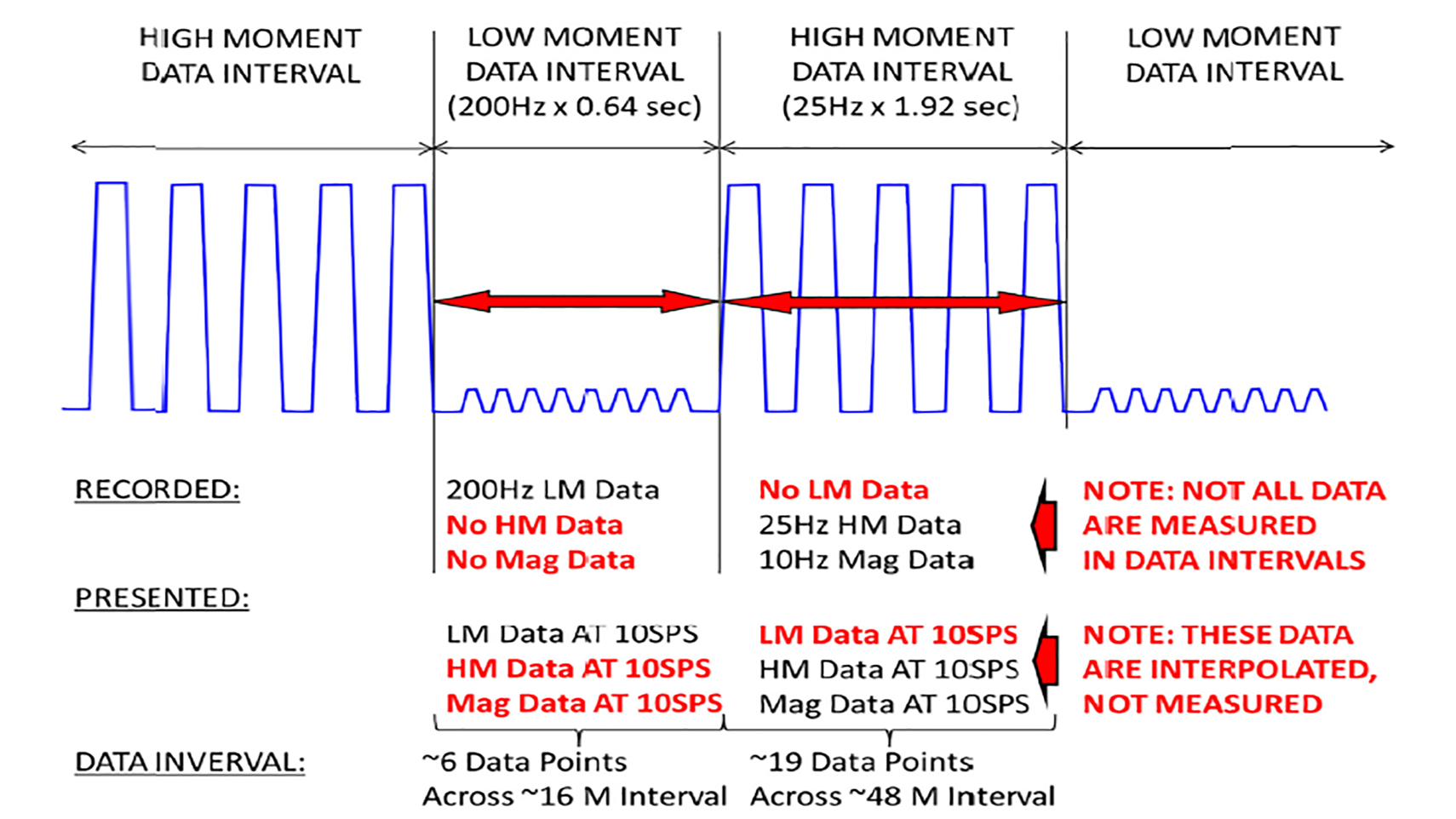 Due to the fact that both the LM and HM data are not acquired simultaneously, this necessarily results in significant data gaps, requiring data interpolation. In this case, during the low moment data interval, lasting typically 0.64 seconds, the high moment EM data are not acquired. Similarly, during the high moment data interval, lasting typically 1.92 sec., the low Moment EM Data are not acquired (Auken et al., 2009). Moreover, magnetic data cannot be acquired either during the LM stage due to the influence of the B-field generated during LM data acquisition (Gisselo and Rasmussen, 2012). This results in the HM EM and magnetic data being interpolated over a distance of approximately 20 metres across the LM data interval. Similarly, the LM EM data are interpolated for approximately 50 metres across the HM data interval. These therefore represent significant data gaps and loss of resolution in the sequential dual waveform system data, particularly for the LM EM data. These effects are illustrated in Figure 2.

Although, at first glance, the gaps that this sequential waveform method produces might cause alarm, both the system design and the data processing have been tailored for the horizontal layered situations typically encountered in groundwater applications, where the EM response does not change significantly along the survey lines. However, in the case of mining exploration, where multiple discrete conductors can often occur in short distances, the results can be misleading, as shown in Figure 2. 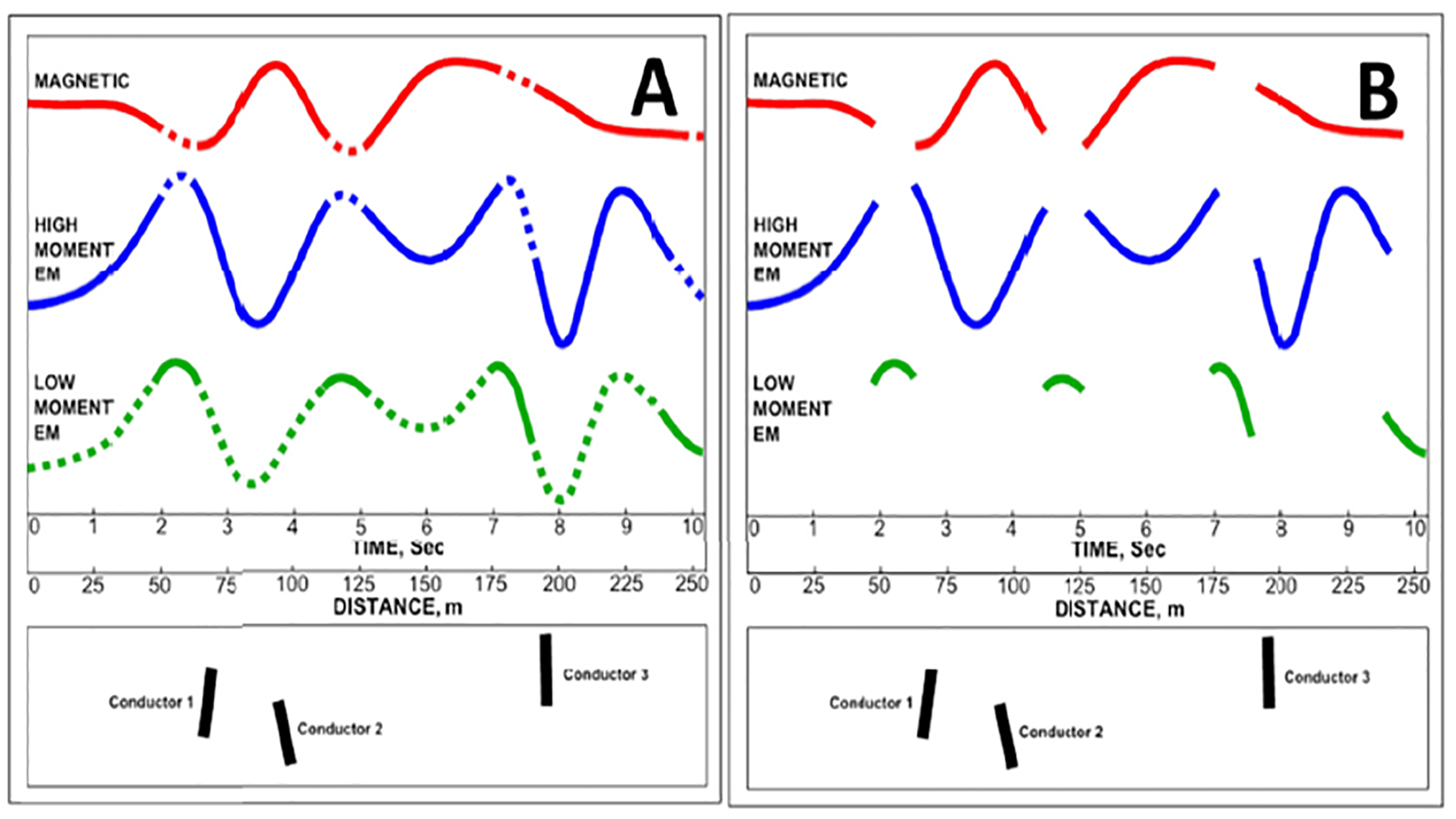 The second case is for the dual waveform system whereby the high moment data, obtained using a longer pulse at high amperage, are collected simultaneously, in the same duty cycle, as the low moment data, using a smaller, shorter transmitter pulse, at the end of the high power data interval, as shown in Figure 3 (Chen et al., (2013).

Although the simultaneous dual waveform is unhindered by the data gap issue, seen previously for the sequential dual waveform case, other problems arise. In particular, the case where the host rock resistivities are low (<50-100 ohm-m) or target conductances are high results in the HM response extending into the latest channels (>8-12 msec) while also remaining above the noise level. In this case the late time response after the HM pulse would be cut short and not measured due to the presence of the LM pulse. Such a compromise of the late-time response would necessarily reduce the depth of investigation as well as limit the detection of high conductance targets. Moreover, the late time response would also overprint LM pulse data window, resulting in an erroneous shallow depth conductivity model. 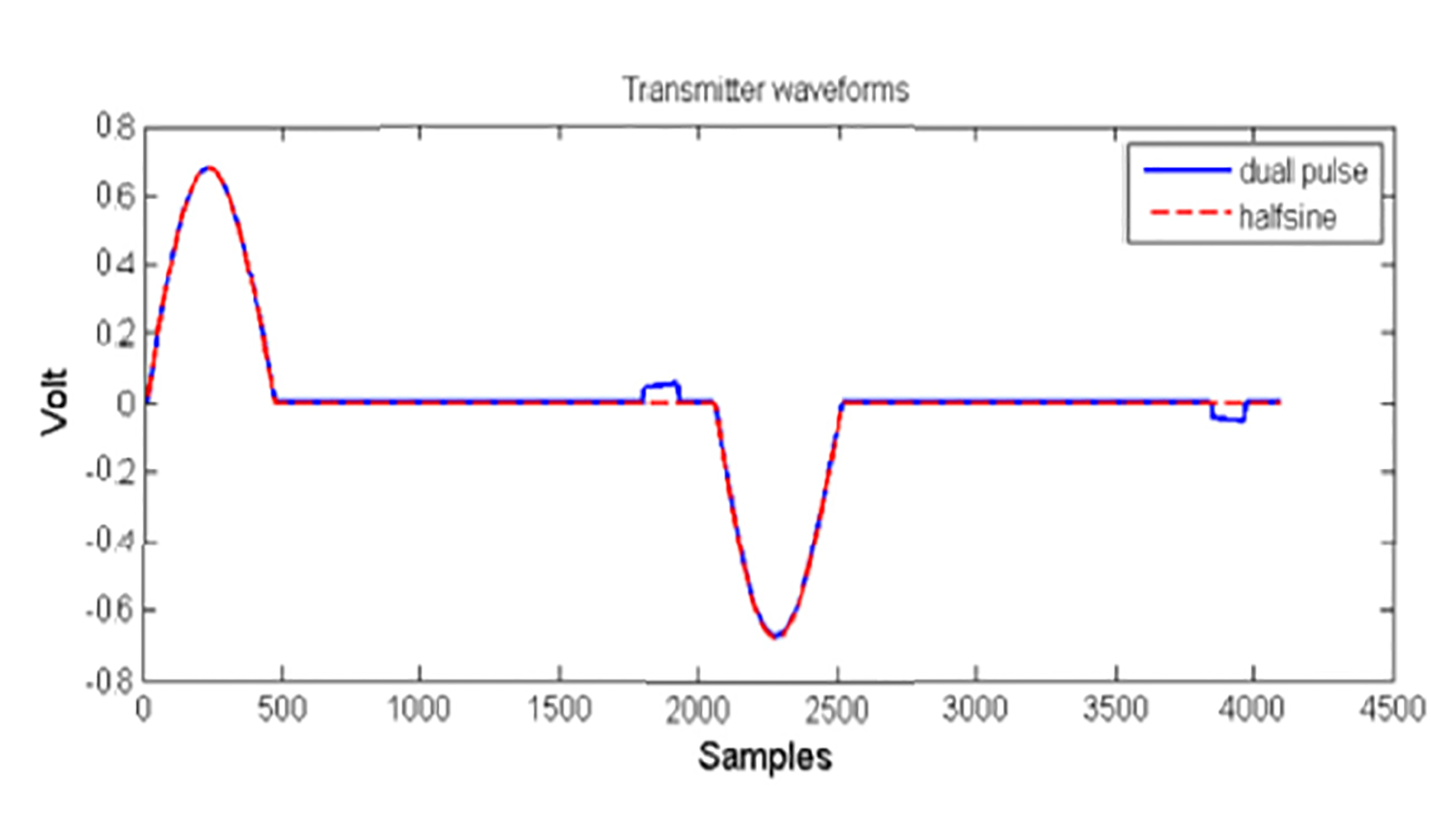 This study has demonstrated certain issues surrounding measured data from dual waveform systems, particularly in mining applications. Other issues include the inability to obtain B-field data and effects of applying heavy filters to reduce noise. Clearly the way forward to avoiding these issues is to improve the system parameters for single waveform systems, particularly with regard to eliminating the system response that is present in the earliest channels (<0.1 msec) after the transmitter current turn-off. An example of such an approach is waveform deconvolution by Annan (1986) and proposed by Macnae and Baron-Haye (2010) for single waveform helicopter time-domain EM systems.